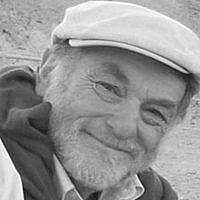 The Blogs
Joe Neppe
Apply for a Blog
Advertisement
Please note that the posts on The Blogs are contributed by third parties. The opinions, facts and any media content in them are presented solely by the authors, and neither The Times of Israel nor its partners assume any responsibility for them. Please contact us in case of abuse. In case of abuse,
Report this post.

Two American Jewish brothers, Jackie and Dan Burland, both in their seventies, who have on occasions, been known to raise the Israel flag in downtown San Diego, recently paid a visit to see family in the Holy Land.

Born and bred in apartheid South Africa, they qualified as lawyers, embroiling themselves in the quagmire of a country embattled with maintaining White supremacy, and at the same time, seduced by the glorious, luxurious lifestyle enjoyed by a privileged minority.

After some years, with their young wives in tow, like so many professionals of their ilk, in order to live in a society of which they could be proud, they decided to emigrate to the States.

With great endeavor they re-qualified in their fields of expertise. Jackie, the older, specialized in aspects of civil law, whereas Dan, became totally involved in criminal law.

Instilled with a love of Israel filtered down from Benzion Shmuelson, their zaida on their mother’s side, they have paid many visits over the years to their sister, Sharon, living in Ra’anana, and a host of first cousins, who had made aliyah from South Africa.

One of the highlights of this particular visit was a family reunion in the seaside town of Michmoret, where the Shmuelson cousins and their offshoots from Israel, United States, England, South Africa, gathered together for a special day on Israel’s Day of Independence. The glue binding the clan together was the sole remaining survivor of the previous generation, Adele Samuelson (Shmuelson), 107 years old, and in amazing fettle. Her late husband was Skea, oldest son of the aforementioned Benzion.

My name is Joe, also in my seventies, living in Israel, and first cousin to the Burland brothers. I picked them up from the airport and drove them to Ra’anana, the base for their two-and-a-half-week holiday.

One of the first words that Jackie muttered was that at some point he wanted to go to the Tomb of the Patriarchs in Chevron.

“Hmm,” I answered, knowing full well that my wife would take a dim view of me driving to one of the country’s most public hotspots. A bus ride with bullet proof protection was an option, I surmised, under my breath.

Caught up in the excitement of vacation anticipation, the subject was swiftly changed.

The emphasis on being with family held sway the first week of their trip, and I had the honor of hosting the two visitors from America for the second Shabbat. With other handpicked guests chosen for the occasion, we indulged in our little feast of fine dining, wholesome and sometimes even heated discussion of political and current issues, laced with a layer of spiritual overtones.

Out of the blue, but somehow inevitable, Jackie reminded us all how much he really wanted to go to Chevron. A muffled silence at the table ensued, while I began thinking of arranging a trip. They were to be in my charge until Monday morning, and going to Jerusalem on Sunday was our obvious destination. No doubt when the plan was mooted in Ra’anana, an enthusiastic response to say the least was not forthcoming.

I thought that the matter was over with, when Jackie said that before going to Jerusalem on Sunday, he and Dan wanted to take my wife and I out for brunch.

In my estimation, that would leave no time for a trip to Chevron. Could be that they had given up on the idea.

So, Sunday was well spent with family, and not even a visit to the Kotel ensued. I was a little surprised, but didn’t say anything. Next morning, Monday, it was back to Ra’anana, where I assumed, that they would once again be involved with family. Jackie was leaving on the Thursday, and Dan, a couple of days later.

On Tuesday afternoon, I received a frantic call from Sharon.

“Where are they? Are you with them? They went off to Jerusalem this morning by bus, and I haven’t heard from them. Their phones don’t seem to have wi-fi connection.”

I was nonplussed. I had no idea where they were. We sent WhatsApp’s and messages, but to no avail.

As it so happens, at midnight they arrived back in Ra’anana safe and sound. Not long before, they had made contact with Sharon. Where had they been?

This now is a partial story of the day’s events:

Like most tourists to Israel, they had their minds set on a visit to the Kotel. Arising early on Tuesday morning, the brothers made their way to the central bus station and headed for Jerusalem. They made their way to the Old City, and thereupon finally reached the Wailing Wall, where they spent a great deal of time soaking up the pristine atmosphere and immersing themselves amongst the variety of people, all doing their own meditations and activities within the confines of this holy shrine.

It was 3 pm when they decided to move on. But where to? No distinct plans had been set, but imbued with the spiritual yearning emanating from the place in which they were then ensconced, they looked at one another and knew. It was time for the Tomb of the Patriarchs in Chevron.

Stirred to action, they inquired of people around how to get there. Dan fidgeted with his phone for information. Within moments, they were on their way to the bus-station, and little after 3.30 pm they were on a bus to Chevron via Kiryat Arba.

The journey lasted one-and-a-half hours. A resident of Kiryat Arba on the bus observed the two wander-struck “kids” and promptly filled them with historical data of the places en route.

For the next four hours, they caressed the cave with their eyes. Jackie, who is immensely proud of his Hebrew name, Yaacov, prayed next to his forefather’s tomb. They wandered about, almost strutting, one might say, as they ambled through the small Jewish enclaves, conversed with the local populace, and, most impressive of all, rubbed shoulders with the soldiers. who were on duty. They were amazed at how relaxed these young men and women were, guardians, in such a potentially explosive environment. They were the epitome of hospitality.

The time flew. They had no choice, but to leave. They boarded the bus back to Jerusalem, and just made the last bus back to Ra’anana. In fact, they almost missed it. Jackie was sitting on the bench, lost in thoughts, while Dan noticed the bus pulling away. He charged forth, and managed to get it to stop.

Why did their outing leave such a mark?

Firstly, despite our apathy about their wishes, they silently remained undeterred. In other words, they showed us up.

Secondly, these are two guys, who in their course of their wonderfully eventful lives, have had their fair share of adventures. Now, they had been transported back into a different age with their physical capacities resurging into a youthful exuberance of brimming energy. Not only in their minds and hearts, but their entire beings embraced by the thrill of the visit to the Tomb of the Patriarchs. A place, where many have yearned to go, but not too many have actually succeeded.

And if I had driven them there, or even gone on a bus with them, after an hour or so, I would have probably looked at my watch, and said, “Okay boys, time to leave.” It just wouldn’t have been the same.

Never mind the daunting spectre of public transport, their somewhat advanced ages, and the volatile area in which they were headed, the Burland brothers did it on their own.

Privileged to be their first cousin. 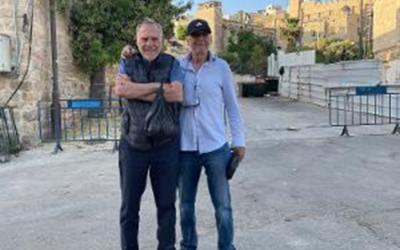 The Burlands:
Jackie and Dan.
About the Author
Joe Neppe, a former journalist at some of South Africa's leading newspapers, spent many years after making aliyah in different working and learning areas. Today, somewhat retired, he involves himself mainly in various writing projects. He lives on Moshav Matityahu in the Modiin region.
Related Topics
Related Posts