Major-General Qasem Soleimani was a man well used to violence. Should he have wanted to know something I know, he would not have hesitated to order me tortured. If he had wanted me dead, he would have ordered me killed. Of this I have no doubt. I am, therefore, pleased that I never merited his notice nor been in his power.

Nonetheless, I have for years had tremendous respect for this man as a professional. Amid the noise that he was somehow a man of great wickedness because of his success in a grim business, and the nonsense that killing him was somehow an act of justice, I think he and his boss will consider his life to have been well spent.

I was surprised that the United States chose this moment to kill the Governor-General and Commander-in-Chief of Iran’s satellite states. I shouldn’t have been: the Americans and Iranians have been escalating hostilities ever since the US pulled out of the monumentally successful Joint Comprehensive Plan of Action (the Iran Nuclear Deal). Dropping a house on the Wicked Witch of the East is, in that sense, a logical progression.

My surprise might have come from the idea that targeting senior regime figures (and Soleimani was a senior figure in the Iranian government) and senior commanders might boomerang on American policy at some point in the future. It’s not so much that I think of American generals as particularly vulnerable to Iranian attack; but America has allies and strategic partners whose senior figures might now be considered legitimate targets. They might not have the same level of protection as American generals and statesmen.

There were reasons not to pump three rockets through that particular car window. The most ruthlessly effective enemy that Daesh (the Islamic State) ever faced was General Soleimani. Also, Soleimani ensured that Hezbollah threw masses of Lebanese manpower and Iranian materiel at the enemies of Bashar al-Assad (enemies which included Daesh). It seems a shame to kill someone who has caused more attrition to Hezbollah than anyone else, ever.

Most important, I considered Soleimani to be a serious professional military officer. To me it is not wrong to kill a professional soldier in a war zone, but it is counterproductive to kill senior technocrats in foreign governments, even if they are governments towards which you are hostile. This is because competent senior technocrats are the people you rely on to ensure that foreign governments behave in useful and expected ways.

I have read suggestions that rocketing Soleimani’s car somehow decapitated the Qods Force he commanded. Decapitation is a very poor metaphor here: when you decapitate people they invariably die. Every single cell in the body dies. All of them. 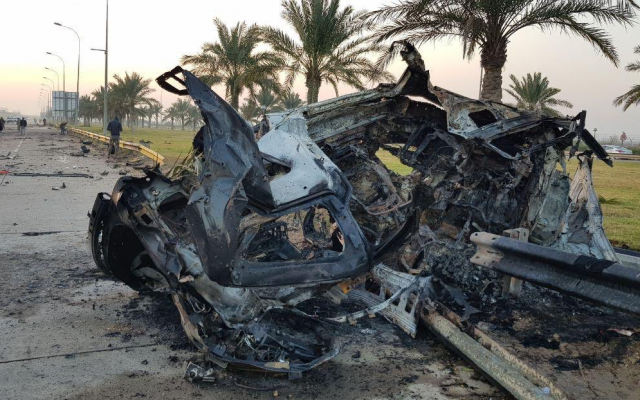 The wreckage of an American airstrike that killed Iranian general Qassem Soleimani in Baghdad on January 3, 2020. (Social media)

Killing a general does not cause his command to die. The last general whose death in battle would have caused the immediate defeat of his army was arguably Napoleon Bonaparte.

Soleimani was an immensely effective commander who recovered from his greatest defeat at the hands of Daesh, the Islamic State. Every Daesh success was a defeat for Soleimani, but every step towards their destruction, regardless of who was doing the shooting, was his success, as Iran’s sphere of influence was restored.

He was, in his own context, a great man; and especially valuable to his boss, Iran’s Supreme Leader. He was not, however, indispensable to Qods Force, to the Revolutionary Guards, nor to the man at the head of the current Persian Empire.

Killing Soleimani and some locals whom he had under his control was a potentially useful act of political violence. The faraway pilots of those little aircraft attacked a senior officer of the Islamic Revolutionary Guard Corps (IRGC), an organisation of immense political and economic power which is important to keeping the present Iranian regime in power by means of (among other things) brutal, violent suppression of dissent.

It’s not that the IRGC will have trouble continuing to do that without General Soleimani; it’s that they have been shown to be vulnerable in exactly the place (the Iranian near-abroad) where Qods Force is meant to be in control. This might cause the IRGC to lose prestige relative to other organs of Iranian state power; but then again, in the context of the Iranian culture of martyrdom (fountains in Iranian military cemeteries still run red with simulated blood), it might not.

US embassies, then and now

For the White House, an embassy problem was both a threat and opportunity. When the US Embassy in Saigon was overrun during the Tet Offensive in 1968, Americans at every level began to realise that they were losing a war. For many, they were losing a war they had not even known they were fighting. When 52 Americans were held hostage by the new Islamic Revolution in Iran, both American inaction and failed American action, again, made Americans feel they were losing.

When pro-Iranian Shi’a militia members showed last Tuesday that the Green Zone was no longer a safe zone for America, they created a moment in which America had a stark choice: play Iran’s confrontation game to win, or accept a measure of defeat. Unsurprisingly, the US government went for the latter. For many in Iran, only mourning for the late general would have muted the celebratory popping of corks on bottles of Zamzam Cola.

The importance of the embassy and its surrounding Baghdad Green Zone was emphasised when the immediate response to the US killing of Soleimani was a volley directed against exactly that spot. This was probably in part because the rockets were already in the right place to blast the Green Zone, but also because blasting the Green Zone is a way to confront America.

The particular importance of the US Embassy in Baghdad is that it echoed the Tehran embassy occupation. The occupation of the US Embassy in Tehran defined one of the key tenets of Iranian government policy. It enabled Iran’s new leader, Ayatollah Ruhollah Khomeini, to confront the American colossus by holding 52 Americans hostage. Every American response to that situation was political gold for the new government. Iran has, ever since then, defined itself as the great confronter of America.

This confrontation is an end in itself. Whereas the Viet Cong overran the American Embassy in Saigon as part of an effort to achieve a unified Communist Vietnam, Iran does not confront America in order to achieve some other goal.

Confrontation is not an absolute: Iran can trade away confrontation to achieve other aims. Contrary to the view of some, they are not ‘mad mullahs’, but people with an enormously sophisticated view of interests and policy. Iran’s agreement to the Joint Comprehensive Plan of Action was a huge step back from confrontation, but they gained the nebulous right to build nuclear weapons, so long as they never built them; and that was worth the price of giving up confrontation. Also, their economy had been so crippled by American-led global sanctions that they had no choice.

For the Iranian regime, particularly for Iran’s Supreme Leader, confrontation with America is great, and the more confrontational the US is towards Iran the better Khamenei likes it. The American withdrawal from the Joint Comprehensive Plan of Action was a tremendous gift to Khamenei, and unless the damage caused by Soleimani’s death is somehow a death-blow to the regime, the general’s death will be part of a gift that keeps on giving.

The years of significant American involvement in Iraq were, from an Iranian regime point of view, a boon. America had, for reasons largely unrelated to confronting Iran, put itself into the region and made itself vulnerable. Like those 52 American diplomats held for 444 days in 1980-1981, from 2003 to 2014 (and to a lesser extent onward to this day), Americans were right over the border from Iran and exposed to the attacks of Shi’a militias who were happy to attack them.

America had put its nose right there in front of Iran, and let Iran’s proxies punch it. That was the perfect context for the Islamic Revolutionary government to achieve their goal of maximum confrontation of America. The more American soldiers were deployed in Iraq, the happier Iran was. When Iran managed to swallow their disdain for Afghan militias, they could confront America even more by supporting action against US and NATO forces in Afghanistan. 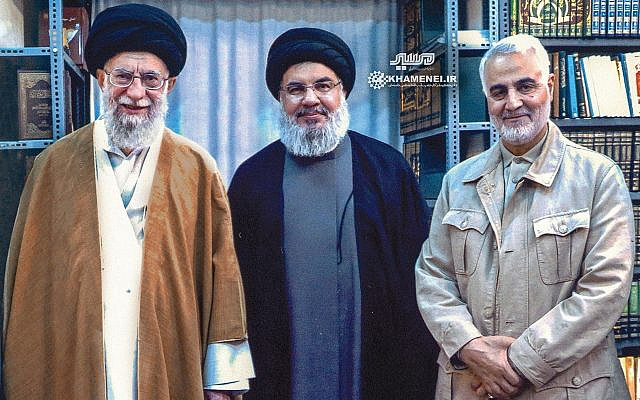 In killing Soleimani, the US has supported that aim of confrontation. Hundreds of thousands of Iranians of all ages died in the war against Iraq, and created a culture of martyrdom. Soleimani has joined that cadre. I don’t over-value martyrdom: dead people don’t pull triggers, and the children who died charging in human waves against Iraqi machine guns represent a generation lost to Iran’s culture and economy. Soleimani is not worth more to Khamenei dead than alive, but if either Iranian could have chosen the general’s death, this is the one he would have chosen.

At this moment, the interests of Iran’s Supreme Leader and the President of the United States are aligned. Both are keen on confrontation: Khamenei because it is an end in itself, but also because it will help him to exercise influence against the already-quiet voices for change in Iran; President Trump because he has an election to fight, and confronting a Muslim man in a turban with a huge beard will not do him any harm in that quarter. 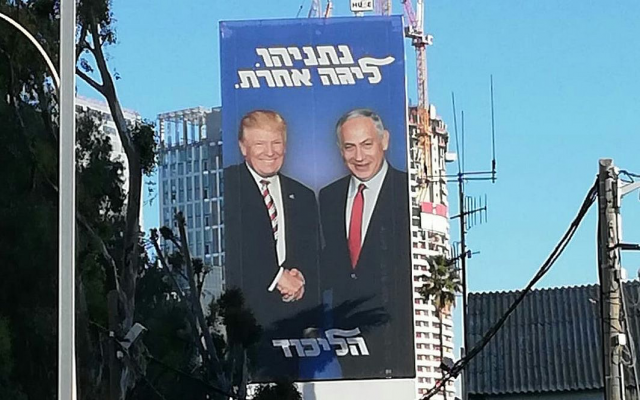 Likud billboard on the side of the busy Ayalon highway in Tel Aviv, February 3, 2019. The title reads ‘Netanyahu, in a different league.’ (Courtesy)

This is also a moment in which Khamenei’s interests are aligned with Benjamin Netanyahu’s. In the last election, Mr Netanyahu campaigned so closely to Mr Trump that he was getting blond hair caught in his teeth. Israeli interests are not served by confronting Iran, but Israelis’ attention cannot turn far from an apparently enraged Iran. Netanyahu’s indictment, like Trump’s impeachment, won’t hold people’s eye the same way.

Even the cleverest calculation is not without risk. In this case there are two risks. The one risk, of course, is escalation out of control. The colourful articles suggesting that a confrontation in the Middle East could result in World War Three take possibility to absurd lengths, but there is a lot of unpleasant escalation available short of all-out nuclear exchange. The other risk is going to a great deal of effort and failing to achieve one’s aims. I should also mention the risk of killing and hurting lots of people, so let’s call it three risks.

Killing Soleimani was a clever choice: it directed state violence against an excellent commander of irregular soldiers, and against someone near and dear to Iran’s Supreme Leader. It made clear that the US would not accept another embassy crisis, and did a good job of expunging from the headlines a significant failure of American policy in the region. All the world leaders involved (apart from the pathetically sidelined Prime Minister of Iraq) stand to gain from the confrontation. It’s win-win for everybody, as long as nobody else gets hurt.

Sadly, with this level of violence at everyone’s disposal, there is every chance of hurt. Qasem Soleimani wouldn’t have minded.

About the Author
Dr Lynette Nusbacher is a strategist and devil's advocate. She is a core partner in Nusbacher & Associates, a strategy think-tank. She has been a senior national security official in the United Kingdom, was Senior Lecturer in War Studies at Royal Military Academy Sandhurst, and served as a military intelligence officer.
Related Topics
Related Posts
Comments