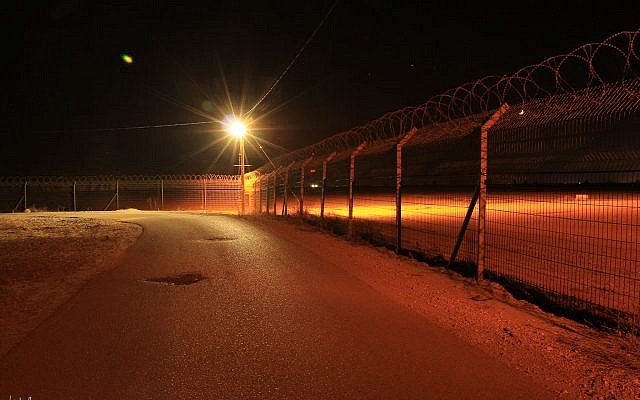 First: booby-trapped balloon launching has been renewed the past few days. Then, last night: a rocket shattered the silence of the night when it was launched into Israel. It was the first rocket shot at us in a month and a half, supposedly in retaliation for the deaths of a rioter earlier on Friday, and three others the week before. Young men with so much potential life ahead of them.

About these deaths: There is a no-go zone near the border. Gazans are warned that anyone caught in that zone, could be shot. Directly following Operation Protective Edge, the zone for no-man’s land, where anyone found on it would be suspect of terror intentions was 300 meters (around 328 yards). Then it was lowered to 100 to enable Gazan farmers to work the land. Now, thanks to the weekly “Marches to Jerusalem” Gazans with intentions of tempering with the fence, planting explosives and even breaching it to infiltrate Israel, approach it with apparent impunity. They know that IDF soldiers have clear orders for when they are allowed to shoot (only in life threatening circumstances), and that they must wait and get permission from their commanders each time. The rioters who have been shot and killed SHOULD NOT HAVE BEEN THERE IN THE FIRST PLACE. Just because Hamas’ modus operandi is to endanger their citizens, does not mean that Israel doesn’t have the right to protect hers. Preventing infiltration into our country, our communities, our homes; and the act of planting explosives aimed at killing patrolling soldiers, fall under that right. The Hamas, who call for their people to participate in these riots, bear the sole and total responsibility for those Gazans’ deaths. As much responsibility as if the Hamas leaders, themselves, were pulling the trigger.

The Hamas are traitors to their people, their tactics leading to the maiming and death of their citizens, many of them children or hormonal teens, easily lured to the excitement of the adrenaline-rushed running away from Israeli soldiers after throwing rocks or trying to squeeze through fences. These Fridays provide a change in routine from the mostly hopeless lives they lead, giving them some warped sense of purpose and turning it into a thrilling yet deadly game. These adventures result in so many one-legged males in Gaza who can buy one set of shoes between them, that it would be funny if it weren’t so sad. This is how it works there, rather than investing in efforts to change the broken protocols which are not achieving anything to better the plight of their poverty-stricken, suffering population.

Such is the view I hold, living where I do. I live on a kibbutz — a community less than two kilometers from the border with Gaza. Due to this proximity, our community activities often rely not only on our own schedules, but also upon what is happening near us. Due to the fact that last Friday, as well as yesterday, there were deaths on the Palestinian side of the border, as a result of infractions and violence on the border fence, the issue of possible rocket fire came up in the discussion. Around dinner, my family and I recalled different celebrations in previous years that had been cancelled or cut short because of rocket fire. In fact, the first time I saw Iron Dome live in action was at a Purim celebration around six years ago. I had been standing on the veranda of our dining room, waiting for my turn to get back on stage, when I saw two eerie lights softly floating towards each other east of us in the distance, as if they were in some other-worldly duet, culminating with the couple uniting in a flash and a distant explosion. It was miles away, towards Ofakim. That Purim party was cut short, as we were dispersed to go home to the safety of 10-second sprinting distance to our safe rooms.

As in many kibbutzim, we celebrate holidays on the nearest Friday night to the actual date, so we can party hard and sleep in the next day. (Sort of like many holidays in the States have been moved to Mondays, to make for long weekends). So last night was the New Years celebration here on Nirim. But rather than attending last night’s celebration, I chose to turn in early. Honestly: a New Year’s party totally loses something when you don’t have the count-down to midnight, embarking into the New Year with a kiss. (Maybe if I ever again find the special someone with whom to celebrate it, I’ll be willing to overlook the lack of synchronization in the timing between our celebration and rest of the world, but for now, an early night suits me just fine.)

As I slept, the Hamas rocket penetrated through Israeli airspace, triggering no rocket warnings, apparently exploding in an unpopulated area in the northern Gaza Envelope. I was blissfully unawares; my slumber undisturbed. Later on, the IDF retaliated. The explosion jolted me from sleep around 3 a.m. At first I thought it was thunder, and got up to disconnect the computer just to be sure. But it wasn’t thunder. Nor did the noise come from the New Year celebrations being held on my kibbutz. Most likely it also landed in an open space where no Gazans were physically injured. But it was a “message”. An answer to their earlier “message”. 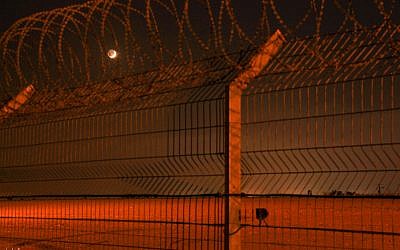 Why can’t all these “messages” be conveyed with words, with talks, with diplomatic contacts? Why do the people on both sides have to continue living this way? It is clear as a bell to anyone who lives here, that until the Gazans have something to live for, they will only have something to die for. How long must we wait until the leaders on both sides of the border start stepping up to the challenge, and send messages that can move us closer to sanity rather than away from it? 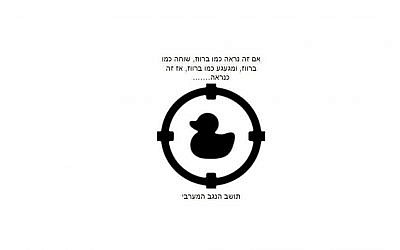 My WhatsApp Profile picture which says:
“If it looks like a duck, and swims like a duck, and quacks like a duck then it must be a resident of the Western Negev.”
About the Author
Born in the USA, Adele has lived in a Kibbutz on the border with the Gaza Strip since 1975. She is a mother and a grandmother living and raising her family on the usually paradisaical, sometimes hellishly volatile border. She moderates a FB group named "Life on the Border". https://goo.gl/xcwZT1 Adele recently retired after 38 years as a teacher of English as a Foreign Language, as well as a teacher trainer and counselor for the Israeli MoE for EFL and a Tech Integration Coach. She blogs here about both Life on the Border, as well as about digital pedagogy, in "Digitally yours, @dele". She is a YouTuber, mostly on the topic of digital stuff. (https://goo.gl/iBVMEG) Her personal channel covers other issues close to her heart (medical clowning, Life on the Border, etc.) (https://goo.gl/uLP6D3) In addition, she is a trained medical clown and, although on COVID hiatus, until allowed back into hospitals, she clowns as often as she can in the pediatric ward in the hospital in Ashkelon. As a result of her activity as an advocate for her region, she was included among the Ha'aretz "Ten Jewish Faces who made Waves in 2018" https://goo.gl/UrjCNB. In November 2018 she was invited to Geneva by an independent investigative committee for the UN to bear witness to the border situation, and in December 2019 addressed the UN Security Council at the request of the US ambassador to the UN.
Related Topics
Related Posts
Comments