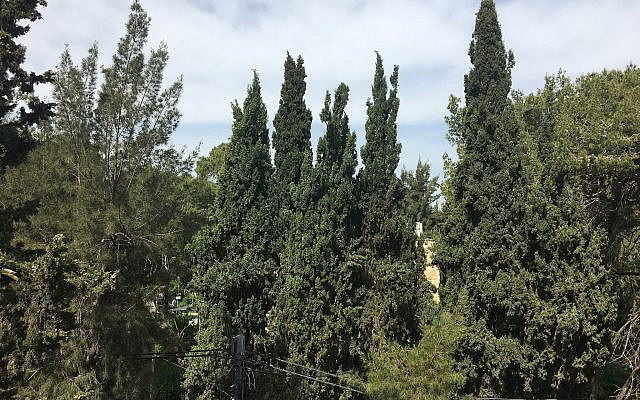 Our neighbourhood trees before the tragedy (photo, Stephen Horenstein)

On the morning of Thursday, December 10, 2020, 11 large full-grown trees were suddenly destroyed in one of the most forested areas in Jerusalem, Kore HaDorot 6, Talpiot-Arnona.  The trees were part of the street’s permanent landscape, beauty and character.  The following is a diary which was found by the author at the foot of a small severed tree trunk.  Before reading it, the author had began a protest to stop the destruction of our neighbourhood’s trees, but unfortunately DID NOT succeed.

7am. I awoke to the sound of a buzzsaw that reeked of petrol and sawdust.  Then I felt it–the first a jab at my scalp, which rapidly shedded fresh bark and dark green cuttings.  It wasn’t long that I realised that the victim was me. 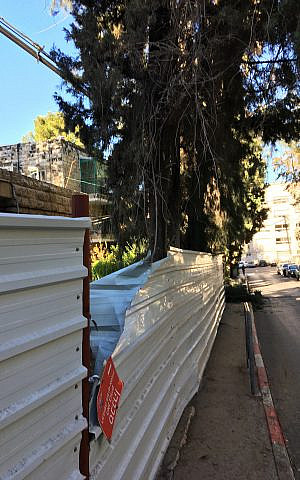 (Buzzsawing, above video by Stephen Horenstein)

8am. I assumed it was only a trimming.  It had often happened this way before in the pre-freezing months to protect the invading webs of electric wires.  The problem was that it was still balmy late autumn.  I then felt another jab to my forehead, looked downward and noticed that the chunks were becoming bigger. 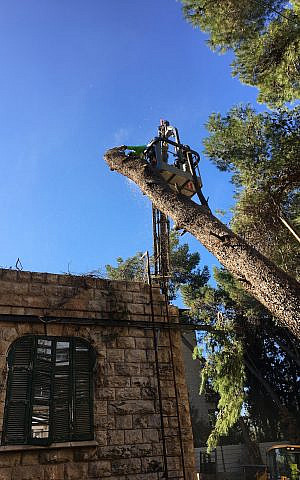 9am. I sensed that things were moving fast, certainly faster than they ever had in the past (all 100 years of it).  The men cutting were smiling.  Their blue hats were funny, but I also noticed one of them supported a huge buzzsaw with his chunky hand.  Such weapons are lethal to humans, animals and of course, trees. 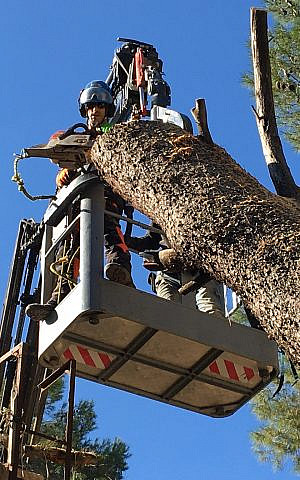 Man in the blue hat (photo by Stephen Horenstein)

10 am. The chunks have become larger now.  I felt my head rattle, then my neck and soon an inch away from my breaking heart.  I thought of all those who had enjoyed my shade, my graceful dance in the winds, my natural beauty with the power to heal the “un-healables”. But now I about to become a become a victim of murder and greed for my branches are spread strewn over a large children’s park nearby and the adjoining street and nearby residencies.  How many lives do I save with all my past embraces? 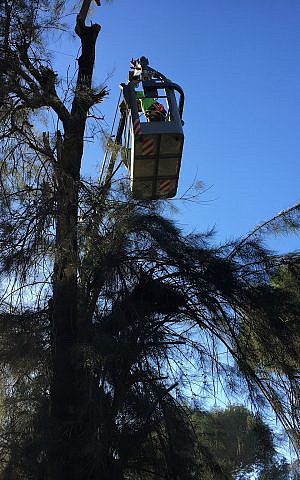 Branches, cut and fell, one by one (photo by Stephen Horenstein)

10:50 am I hear a loud megaphone and siren, with one of the residents yelling to the workers to stop.  He even tries to prevent them to cut the remaining sidewalk trees by standing in the road.  The siren is frightening.  Finally the police come and try to calm the resident, threatening to arrest him in this one-person protest.  I sigh and admire his courage! 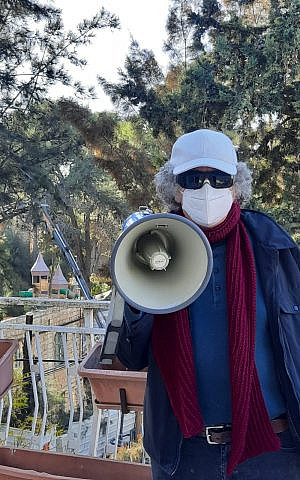 Author as he prepares to protest (photo by Sara Horenstein, w. permission)

11am. I am only a small trunk.  The fluid you see are my tears.  I look up and see them attacking my best friends, my neighbours, whose shade had protected children in the adjacent park and kindergarten.  The white fence “marking” the line on the street (half way up the sidewalk) and the side of the site is a LIE.  We are on public property and benefit all peoplekind.  The white fence was built like this out of greed for gaining another 30-40 centimetres to allow the slaughter.  They are destroying eternal Jerusalem, replacing it with false idols and new condos, large boxes for humans to rent. 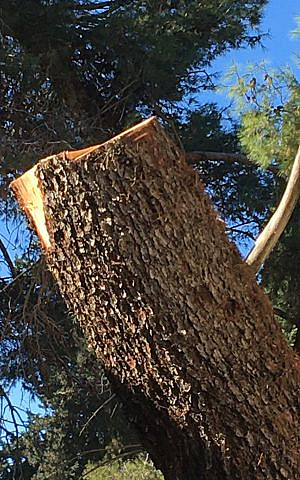 12 noon.  We will not have a burial but rather will be sold to cold people for the winter.  Our souls will become ashes, disintegrating and mixing with the already polluted.  However what the savages do not know is that with our remains are also thousands of seeds that will immediately start to grow and flourish.  They, our ancestors, may take 40-50 years to grow back, but by then the apartment building which is being built now will be old and dilapidated, rodent-infested and ripe with plague.  It will then need to be totally demolished, and like the miraculous Hanukkah lights, we will prevail, grow and return! 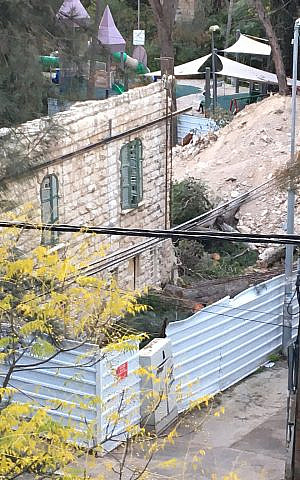 The trees on your left NO LONGER exist!…. 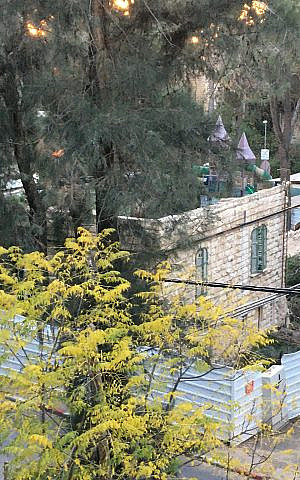 Note: The author tried to save the trees, but with no success.  He stood with his siren/megaphone and asked neighbourhood residents to help, but to no avail. The permit to cut allows the cuttings on the land allotted for building, but not on the public land sidewalk and nearby parks.  But nobody was supervising.

Our neighbourhood has been been violated and defeated.  I feel powerless, for the trees have been destroyed in one huge powerful gesture.  Hopefully they will grow back someday but I, the witness of their execution, will unfortunately not be there to enjoy their grace, beauty and healing powers.  It’s a sad day for our neighbourhood, a sad day for Jerusalem. 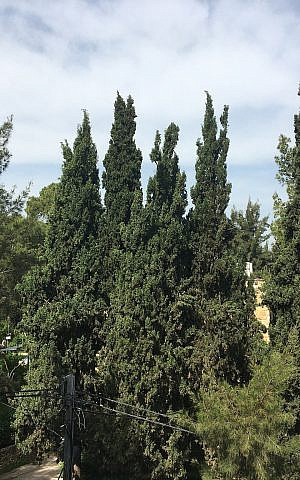 Before (photo by Stephen Horenstein)

After (photo by Stephen Horenstein)
About the Author
Stephen Horenstein is a composer, researcher and educator. His repertoire of musical works has been performed and recorded worldwide. He has been a recipient of the Israel Prime Minister's Prize for Composers and the National Endowment of the Arts (USA). His teaching has included Bennington College, Brandeis University, Tel Aviv University, Jerusalem Academy of Music and Dance; residencies at Stanford University, York University, California Institute of the Arts, and others. He is Founder and Director of the Jerusalem Institute of Contemporary Music, established in 1988 to bring the music of our time to a wider audience.
Related Topics
Related Posts
Comments