Retweeting does not mean endorsing; everybody knows that. Nonetheless, when notorious devotees of the “antiZionism is not antisemitism” cult retweet the glorification of the languages of the Diaspora, an endorsement is precisely what is taking place. 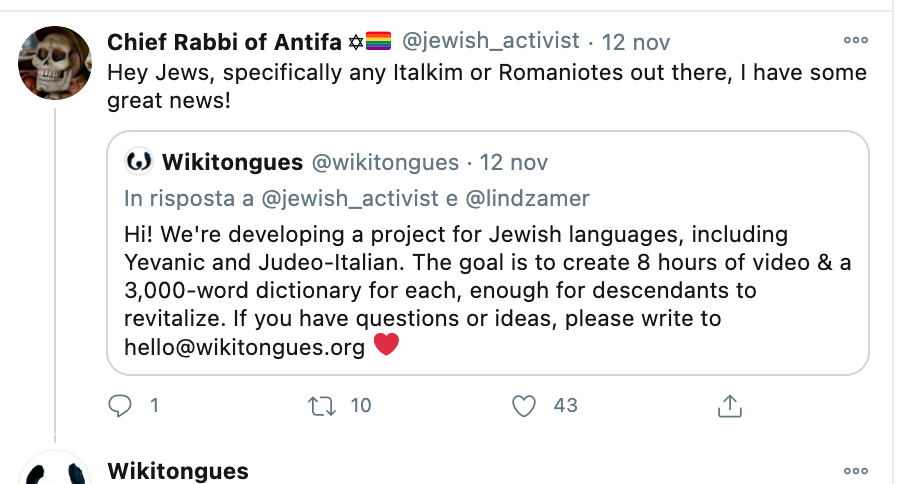 I obviously wish good luck to the WikiTongue enterprise and to whoever wishes to “revitalise” any Jewish language, including giudeo-romanesco, the language of the Jewish population of Rome (which to my mind is alive and does not need any revitalisation).

Too often the celebration of Diaspora works as a tool to please the kind of (non-Jewish) audience willing to listen to, how Israel is bad for the Jews, and how wonderful is Jewish life without a State. I am happy to be proven wrong; in such a case, I suggest the curators of the enterprise stay away from self-appointed “Chief Rabbi”s of a sort.

Anyway, let us figure out how the possible meeting between antiZionist academics and working-class Jews may work.  Probably in this way.

“We are Diasporists! We believe that the Jewish civilisation reached its peak of morality and spirituality when Jews were in exile and…”

“So you want us to return to live in the Ghetto, where the popes forced us to live for centuries?”

“Absolutely not! We are internationalists! As Jews, it is our moral duty to be on the side of every persecuted people, including of course the Palestinians!”

“Palestinians? You mean those who in 1982 attacked our synagogue, wounded tens of Jewish worshippers and murdered a two years old?”

“Why do you call me comrade?”

“Well, as Jews, our natural place is to be on the Left. Like the Bund, the Trade Unions…

“Listen, fellow: I’ll tell you our experience with the Trade Unions. In 1982 during a rally organised by the Trade Unions, a group of your comrades left a small coffin in front of our synagogue. I will let to your brilliant mind to speculate why the Trade Unionists selected a synagogue as a target. But what happened a few weeks after the gift was delivered you already know. Since then we Jews have wanted to know who, among your comrades, had such a wonderful idea…”

‘Look, I don’t think we should indulge in painful pages of the past….”

“The thing is, comrade: we are not taking any lesson from Jews for which Israel is a problem”.

“But Israel IS a problem! This loyalty to the outdated Zionist ideology makes it difficult, if not impossible, any form of Antifascist, anti-Nazi alliance”.

“Then tell me why, the Zionist Jew you are talking to, was among the demonstrators who in 1996 rebelled after a Nazi criminal, Eric Priebke was found not guilty by a military tribunal (the verdict was overturned).

Tell me how this Zionist Jew, this alleged ally of the Far Right, raided the lodge of a skinheads organisation in 1992 and took away their flag. Those cowards had spent the night before sticking yellow stars of David on Jewish owned shops, and some of them sprayed the slogan you love “Free Palestine”. We taught them that there are consequences.

And tell me how comes that we are the first to mobilise against Holocaust denial, and not afraid to picket the places where the disgusting meeting of so-called minds, of Islamist, Far Rights and (yes, them too) Far Left take place, even under University’s auspices (Teramo, 2007: following the protests the University withdraw its approval)”

‘You did all this? Well, I admit, I knew already part of it but… taken all together, that’s admirable. It is antifascism taken seriously”.

“Not that I need your compliments, Sir. It’s just that living in Rome, where lots of demonstrations take place, including pro-Palestinian, we had to learn to defend ourselves and we got organised”.

‘Yes, but… why have you to throw the pro-Palestinian bit? I mean, you cannot deny that there are good reasons to side as Jews with the Palestinians… even if you and I are not going to agree, come on, antiZionism is not antisemitism”.

“Are you going to tell me who delivered that coffin in 1982?”

“Because you are a Jew -so you say, and I believe you- and at the same time, you are on the Left. You are ideologically close to those who organised that demonstration—those who have been shielding the antisemites from consequences.  And this is precisely when and where (check the chronology) the generation of Rome Jews born after the Six-Day War and the reunification of Jerusalem, had to choose where to stand. Whether with those who deliver empty coffins and keep silence when they are full. Or with Israel, right or wrong our Country”.

“But, Mr Diasporist, antiZionist, so-called-Chief so-called-Rabbi of so-called-Antifa, this is your problem, not mine. You are coming here on a mission to study this exotic and picturesque phenomenon called working-class Zionist Jews. You need me. Without me, no one will remind you that there is Jewish life beyond your bubble of Guardian readers with a view on Stanford Hill. You think that my Jewish language needs to be “revitalised” and my Jewish culture must change in order to fit into your antiZionist world view. I’ll have nothing of this. I get by egregiously and as I’ve told you I am able to defend myself too. I don’t need you”.

“Ah, you’re silent now. Speechless. I must have shattered some of your assumptions. Must be a primer for you. And the shock of being told you’re not needed. Is this why you feel so terrible? But don’t be upset, come on. It’s called real (Jewish) life. It’s healthy for you to learn it exists. Can I offer you a slice of pizza?”