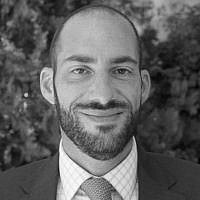 The Blogs
Michael J. Koplow
Apply for a Blog
Please note that the posts on The Blogs are contributed by third parties. The opinions, facts and any media content in them are presented solely by the authors, and neither The Times of Israel nor its partners assume any responsibility for them. Please contact us in case of abuse. In case of abuse,
Report this post. 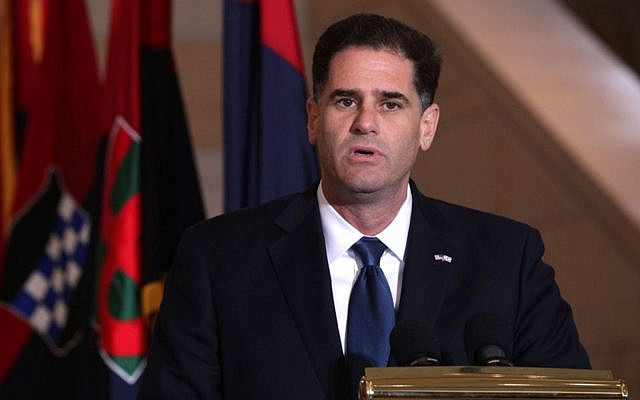 Ron Dermer, Israel's ambassador to the United States, speaks at the annual Days of Remembrance event at the Capitol in Washington, D.C., April 29, 2019. (Alex Wong/Getty Images via JTA)

Determined to advance permanent statelessness for Palestinians, Israel’s prime minister laid out his vision for the future in a series of interviews. “A Palestinian state will not be created, not like the one people are talking about. It won’t happen,” he said in discussing his plans for the West Bank. In discussing the White House’s own plan for Israeli-Palestinian peace, he told his fellow MKs that “in no constellation will the government or the Knesset recognize the principle of establishing a Palestinian state.” He further laid out a series of onerous conditions for the Palestinians to meet but refused to endorse Palestinian statehood despite President Trump’s endorsement of a nominally independent Palestinian state, sneering about the American president, “If they consent to all this, then they will have an entity of their own that the president defines as a state.”

These words were not spoken by Israeli prime ministers who were well-known opponents of Palestinian sovereignty, such as Menachem Begin or Yitzhak Shamir. They were all spoken recently by current Israeli Prime Minister Benjamin Netanyahu in response to the conception and eventual release of the Trump peace plan. If this formulation looks familiar to you, it is because it is the same rhetorical device that Israeli Ambassador Ron Dermer employed in his Washington Post op-ed last week in attempting to argue that Netanyahu genuinely supports two states and that his positions on these issues are indistinguishable from Yitzhak Rabin’s. Unfortunately for Dermer’s argument, he must deal with the burden of Netanyahu’s actual positions laid out above – all of which are from 2019 and 2020 – while claiming that Netanyahu is fully embracing the concept of two states and the Trump plan in its entirety.

Anyone searching for the last time Netanyahu uttered the phrases “two states” or “two-state solution” should be prepared to devote hours to the effort. It certainly has not been in relation to the Trump plan, which takes great pains to describe itself as a two-state solution and which Netanyahu takes equally great pains to describe in any other way. In the press conference at the White House when the plan was unveiled, President Trump twice described it as a vision for a two-state solution; standing alongside him, Netanyahu employed a host of tortured verbal gymnastics to avoid giving his imprimatur to that concept, repeatedly referring to a path for a durable peace while spending almost all of his remarks repeatedly extolling the virtues of Israeli sovereignty in Judea and Samaria. The closest Netanyahu came was saying that the peace plan “offers the Palestinians a pathway to a future state,” but following that in the literal next breath with, “I know that it may take them a very long time to reach the end of that path. It may even take them a very long time to get to the beginning of that path.” Netanyahu wouldn’t endorse two states while speaking in English overseas during the actual rollout of a plan that its authors say is a two-state vision. He will certainly do no such thing when speaking in Hebrew to his actual political constituency of Israeli voters.

I bring this up to put into stark relief the mendacity and scorn for its audience that characterize Dermer’s op-ed. There is genuine and honest debate to be had over whether the Trump plan is a realistic and implementable one or not; Dermer posits that it is, while my own view is very different. But to pretend that Netanyahu and the Israeli government are embracing the Trump plan as a two-state solution is insulting to anyone with even a passing knowledge of Israeli politics. That would be true even if Netanyahu had not in recent weeks insisted that the Israeli cabinet will never approve the Trump plan in its entirety but only the annexation component of it.

It would also be true if Dermer’s words were not purposely changed in order to commit the exact same sin so often attributed to Palestinian leaders of saying one thing at home in their own language and another in English for foreign audiences. When Yisrael HaYom – the free Sheldon Adelson-owned newspaper colloquially referred to as the Bibiton and seen as Netanyahu’s house organ – quoted from Dermer’s op-ed, it took the phrase that reads “it will open the door to a realistic two-state solution” and distortingly translated it in Hebrew (תפתח את הדלת לפתרון עבור שני העמים) to read “it will open the door to a solution for two peoples.” Whether supporters of two states like it or not, a two-state solution induces guffaws in many Israelis these days, which is why neither Netanyahu or Dermer will ever acknowledge supporting such a framework back home. To a bunch of American dupes in the Washington Post, however, all bets are off.

The question is not whether Dermer’s op-ed is predicated on rank dishonesty – it is – but why it has to be that way. Netanyahu has been crystal clear that he is enamored of the Trump plan’s recognition of Israeli sovereignty over every West Bank settlement and approval for annexation of territory, and that he is far less enamored of the rest of it. Dermer’s defense of the annexation envisioned by the Trump plan is similar in telegraphing his pleasure, but he then takes the extra step that Netanyahu has not of pretending to embrace a two-state vision. It would be far stronger and more forceful to just own the actual Netanyahu policy entirely. Netanyahu and Dermer understandably want to extend Israeli sovereignty to as much of the West Bank as possible while taking in the fewest number of Palestinians, do not believe that the Palestinians should ever have a state, and certainly do not believe that the Trump plan is actually going to provide them with one. Exploding what Dermer calls the two-state delusion should just end there, but continuing instead with the charade of embracing a “realistic” two-state vision when anyone paying a modicum of attention knows that a two-state outcome is the last thing Netanyahu wants suggests one of two things.

Either Dermer thinks that all sorts of people who read the Washington Post have no ability to read the news on their own, access Israeli press, and discern for themselves what Netanyahu really wants despite his making no real effort to hide it, or he thinks that there is a particular audience of one who might reasonably be susceptible to his disingenuous tall tales. I’ll let you decide which is more likely, and whether either option makes the exercise any less absurd.

This article first appeared on Israel Policy Forum and was reproduced here with permission.

About the Author
Michael Koplow is the policy director of the Israel Policy Forum.
Related Topics
Related Posts
Comments