The title of Tsvi Bisk’s latest book, The Suicide of the Jews (ContentoNow, 2015) is alarming enough to tell the reader that it is time to start thinking the unthinkable. What if Israel ceased to exist as an outcome of its government policies and of the Diaspora limiting itself to provide moral and financial support without getting directly involved in Israel’s development and decision-making?

This is a distressing document of prophetic caliber. It should be read by members of the Knesset, by writers of newspapers’ op-eds, by preaching rabbis of all denominations, and by Israeli and Diaspora policy makers and influencing people. The book is much more than “A Cautionary Tale,” as its subtitle suggests. It is a “J’accuse” pointed at political shallowness from the right and from the left, from politicians and from academics. 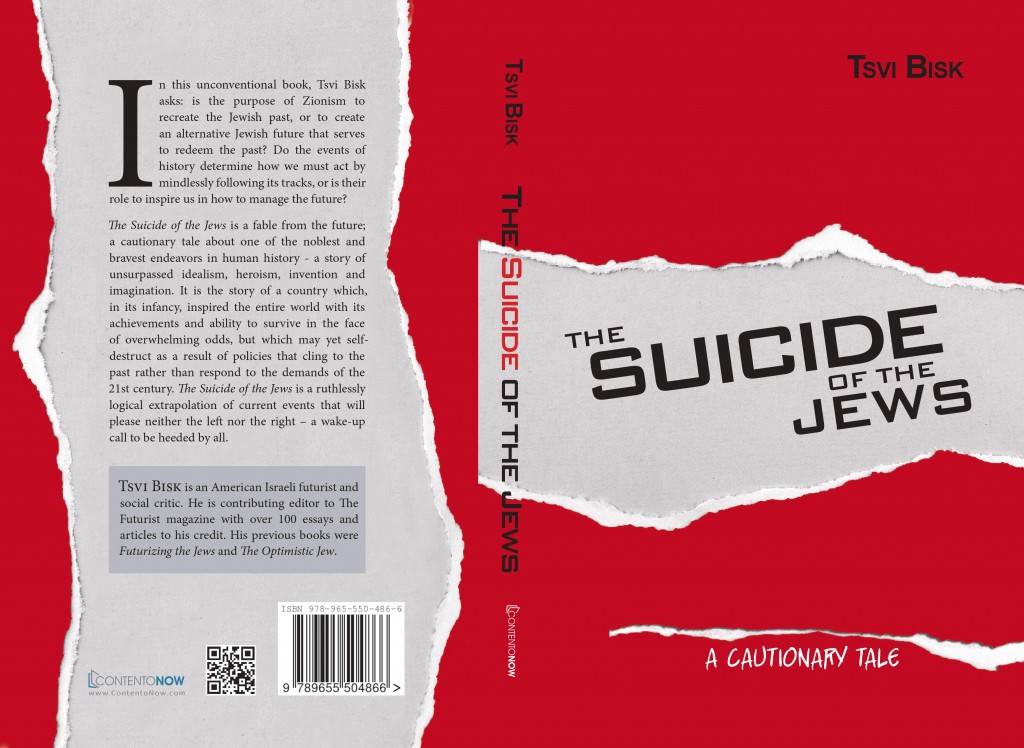 The Suicide of the Jews; cover by courtesy of the author

Bisk, an American Israeli futurist and social critic with more than 100 essays to his credit, presents his new book as the third of a trilogy, preceded by Futuring the Jews (Praeger, 2003,) and by The Optimistic Jew (Maxanna Press, 2007.) When I read the last one, five years ago, I felt stimulated by his use of imagination as an antidote to fear. I do not feel too different after reading his last work. Bisk continues to use his mind to stir the Israeli-Jewish epic story into a better direction than the course it is following now. The difference is in the kind of medicine he uses this time to restore health.

While in The Optimistic Jew the author is full of optimism, positioning himself in 2020 and looking backwards seventeen years, this time he looks back from 2099, delineating an apocalyptic scenario in which Israel ceases to exist in 2048. Too fast-forward? Not really. George Friedman’s The Next 100 Years (Doubleday, 2009) states that “his grandchildren will certainly be alive in the 22nd century.” Indeed, the grandchildren of babies born today will be “the Millennials” by the next turn of the century. The time to care for their future is now.

Tsvi Bisk’s description of the Zionist Movement’s historic background is outstanding. Beyond Anita Shapira’s superb Israel: A History, and Ari Savit’s compelling My Promised Land, Bisk presents Jewish history within a background that sets Zionism into the perspective of The Idea of Progress that resulted from the American and French Revolutions, the Industrial Revolution, Liberalism, Socialism, Marxism and Nationalism. He also sees the connection between ultra-right Gush Emunim and Borochov’s Marxism, promoting the entire Land of Israel to cure the Jewish soul.

Jabotinsky is presented beyond the popular myth about him. The book delineates his mostly ignored profile “as novelist, poet, essayist, political philosopher, linguist, ideologue, party leader and soldier,” fluent in six languages. He would turn around in his grave if he could witness the policies made in his name over the last four decades.

Bisk is not oblivious to the reality of the world’s double standard when judging Israel. He exposes many countries’ cynicism and hypocrisy in accusing Israel, while ignoring extreme Muslim Apartheid, inequalities and antisemitism, also eloquently detailed by Catalonian journalist Pilar Rahola’s in her last book Basta! (“Enough!” in Spanish.)
On the other side, the author denounces a malfunctioning American Jewry and also Labor Zionism’s bankruptcy, which lacks Ben Gurion’s vision, strategic focus and realpolitik. Yet above all, the finger is pointed at the self-defeating settler’s Messianic infatuation with land, not because their claims are immoral or illegal, but because they are foolishly endangering Jewish Civilization.

With all the red lights blinking on the dashboard and the GPS, the reader is called to check both the engine and the direction of the vehicle in which we all travel. Still, in spite of its frightening message, the book looks as the “Act 2” of a complex drama with multiple actors, where the conflict grows deeper and compelling, should the protagonists fail.
We will have to wait for an “Act 3” when events reach climax and resolution. Some have been suggested with ominous overtones by Amos Oz. On a more cautiously-optimistic tone, I have pointed at several possibilities on previous blogs. Still, a broader open-ended act is likely to emerge in the near future, while life continues to evolve.