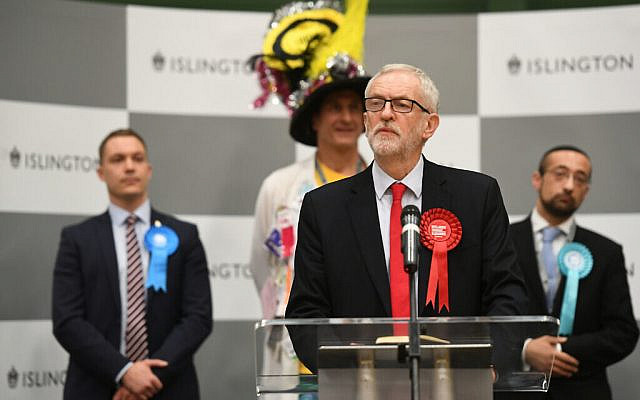 The morning after the long night of the election my first port of call was a dry cleaners near my place of work. The proprietor informed me he voted Labour but wasn’t unhappy Boris Johnson won. Why was that, I asked? He confessed he didn’t like Labour’s nationalisation plans and was pleased Brexit could finally be done.

Then he followed with this line: “I didn’t believe that stuff about antisemitism. It was a conspiracy.” The implication of his remarks were clear: it was the Jews that did it.

Johnson’s thumping victory immediately relieved the high tension in the community about the prospect of a Corbyn-led government of the left that would demonise Israel and ostracise Jews. On the night of the election the first call I took after the comforting exit polls came from a friend who had been on tenterhooks. He confessed to having been to the bank earlier in the week to change pounds into dollars.

He feared a collapse in sterling but also thought they would be more useful if he and his family felt the need to leave the UK for their second home in Israel. If the pound climbed on the foreign exchanges (as it did) it was the best money he had ever lost. A second person told me he had been planning to go to Israel for the holiday period. If Corbyn had won it would have been a one way ticket. He was not coming back.

Almost everyone I have seen or spoken to in the Jewish community since the result had much the same kind of reaction. They admitted to having a knot in their stomachs before the exit poll and then huge relief.

But the dry cleaner’s remark and an after service talk at Western Marble Arch synagogue by my friend Philip Spencer, Emeritus Professor of Holocaust Studies and Genocide at Kingston University, awoke me to a different reality. The Corbynista tendency and the anti-Zionist, anti-Jewish narrative of the left is far from extinguished from the party and British life. This in spite of the common sense tolerance of northern, industrial class voters.

Corbyn and his supporters in Momentum will not relinquish their de facto control of the party easily. The Labour leader has demonstrated his stubbornness by a refusal to vacate office and a very spare apology in which he disavowed nothing about the campaign.

Spencer’s brilliant point is that the left (of which he has been part for most of his academic life) is able to declare itself at the forefront of the fight for anti-racism because it does not see antisemitism as part of that battle. It is possible to be anti-racist and antisemitic at the same time. This is because Jews, in the worldview of the far left, are not people of colour (if they spent time in Israel they easily be disabused) and blend into Western society.

Indeed, they disappear so well that they are the controlling minds, the conspiracy behind media, finance and much else. Corbyn’s vicious attacks on billionaires, bankers and the wealthy is part of a disguised antisemitism.

He and his Momentum compatriots’ hatred of Israel is the result of two strands of thought. In one Israel is both the last vestige of Western imperialism and colonialism. Or conversely it is the breeding ground for a conspiracy to control Western governments and agendas.

None of this narrative has been expunged from the current Labour party by Johnson’s election victory. Whoever succeeds Corbyn will need to publicly disavow and expel these antisemitic views before Labour can be seen as mainstream again. The struggle to suppress antisemitism in the UK is far from being won.