This is the story of Johan Hendrik Weidner, who was born 108 years ago, in October 1912, in Brussels, to Dutch parents. He was the eldest of four siblings. His father was a minister in the Seventh-Day Adventist Church.

When Johan was a child, the family moved to Collognes, France, where his father served as a pastor. Johan grew-up there and after attending French public schools, he graduated from the Seventh-Day Adventist seminary in Collonges and pursued Law and Business university studies in Paris and Geneve.

After obtaining his academic degree in 1935, he established a textile trade business in Paris and opened a shop in Collonges. The town was close to the Swiss border and only 20 miles from Geneve, where he attended a few sessions of the League of Nations, witnessing the incompetence of this organism to thwart the outbreak of the war.

Following the German invasion of France in May 1940, he moved to Lyon to help the “Dutch-Paris” (also called “the Swiss Way”) underground network, focusing on aiding Dutch Jews, allied aviators as well as political dissidents to flee to Switzerland and Spain. Both routes were also used to transfer counterfeit life-saving documents.

His own business office in Lyon was used as headquarters of the “Dutch-Paris” underground and in the height of its activities, some 300 women and men were involved. Half of them ended-up arrested and 40 were murdered, including Johan’s own sister, Gabrielle, who operated from Paris and was actively wanted by the Gestapo, which even instituted a heavy reward for her arrest. She died of malnutrition at the Ravensbrück concentration camp.

All in all, Weidner and the “Dutch-Paris” group saved the lives of 1,080 people, including 800 Dutch Jews and 112 allied pilots whose planes were shot down and were in hiding.

Weidner was the protagonist of many rescue stories. One of them was the saving of the Rosenthal family. The head of the family was detained and transferred to the Châteauneuf-les-Bains camp. His wife and little son were penniless and unprotected.  Weidner arranged an urgent appointment with a dentist for Rosenthal, at a nearby town and there, the patient was “abducted”. Rosenthal was transferred by bus to Lyon where he rejoined his wife and child and there, provided with forged ID’s they fled to Switzerland.

On May 4, 1978, Weidner was recognized by Yad Vashem as Righteous among the Nations and he was also acknowledged by the governments of the United States, UK, Belgium, the Netherlands and France for his courage.

Back in 2014, the ADL honored this Dutch hero with the “ADL Jan Karksi Courage to Care Award“.When presenting this posthumous award, Abraham Foxman, then National Director of ADL underscored:

“John Weidner lived his entire life giving back, in the spirit of what we call Tikkun Olam,” Abraham H. Foxman, ADL National Director and a Holocaust survivor, said in presenting the award. “Until his death in 1994, he lived a life of selflessness and service, working tirelessly to make the world a better place.”

In a phone conversation I had with Dr. Weidner in the early 1990’s, I asked him why he did what he did. I heard his awkwardness when answering: “I had no choice“. To be sure, the vast majority of rescuers I interviewed or read-about, had the same answer to this question. This striking common denominator is thought- provoking, as of course, each of them did have a choice.

In 2018, the International Raoul Wallenberg Foundation resolved to pay tribute to this Dutch hero and commissioned a commemorative Israel stamp bearing his semblance. This stamp is part of the “Holocaust Rescuers” series. 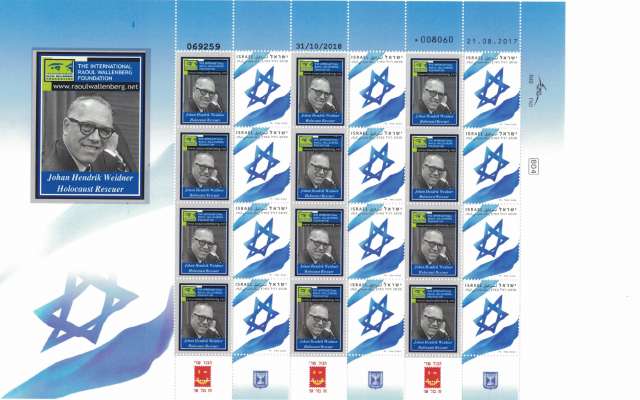 In these difficult days, when the ongoing health-crisis is encouraging so much racism and hatred, I personally find it comforting to reflect upon the legacy of this great hero.

May his memory be blessed.

About the Author
Baruch was born in 1933 in Las Palmeras, Argentina, a little hamlet which was part of Baron Hirsch's Jewish settlements. He graduated from a Yeshiva and spent his first adult years teaching Judaism. In the 1960's Baruch was Director of the Israeli Tourist Office in Argentina, creating a program for Catholic pilgrims. He has founded two NGO's, Casa Argentina in Israel - Terra Santa and the International Raoul Wallenberg Foundation. He is married, has three children and resides in Gibraltar.
Related Topics
Related Posts
Comments