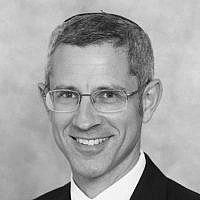 The Blogs
Avi Levitt
Apply for a Blog
Advertisement
Please note that the posts on The Blogs are contributed by third parties. The opinions, facts and any media content in them are presented solely by the authors, and neither The Times of Israel nor its partners assume any responsibility for them. Please contact us in case of abuse. In case of abuse,
Report this post.

Once upon a Modern Orthodox Jewish high school shabbaton, the 9th and 10th graders played a choose your own adventure game. At one juncture, the protagonist could opt to leave the high paying finance job and become the CEO of a major Jewish organization (for good but lesser pay), where they would have a major impact on the community, its priorities, and its resource allocations. The alternative was to remain in finance, sit on the board of the same organization, and influence policy through donations and board work. The vast majority of the students (including one exuberant group that chanted “Money! Money!” repeatedly while announcing their choice) selected the more lucrative job and the board position. Nearly no student saw the value of becoming the head of the Jewish organization.

This blog post could become a rumination about materialism straight up, but instead my interest centers more on highlighting that fewer people seem to head into (Jewish) education these days, and to ask whether the Jewish community writ large is taking sufficient steps to ensure that our young people will dare to enter. There is what to contemplate in the wake of the 2010 Championsgate Retreat which declared the Day School [Financial] model unsustainable, but here we are 12 years later with not all that much changed and with plenty of renovated homes in numerous Modern Orthodox communities. [Teach FL makes a huge difference in the financial lives of the parents in our school here in Boca Raton; Kudos to the OU and this initiative for drawing state funding into the equation.] What we seem to be teaching our young people, and the lesson they appear to be learning quite well and are quite convinced of, is that they need to head more and more towards finance and the highest ROI careers. Jewish education currently is an unattractive option, even in the face of its many benefits and despite its noble mission to carry the Jewish people into a well-educated and well-informed Torah-based future.

If you can name 10 people who are currently encouraging their children to become Jewish educators, please comment below!

About the Author
Avi Levitt has served as an educator for 28 years and as a school leader for 20. He currently lives in Boca Raton with his family, some of whom don't actually enjoy attending school.
Related Topics
Related Posts