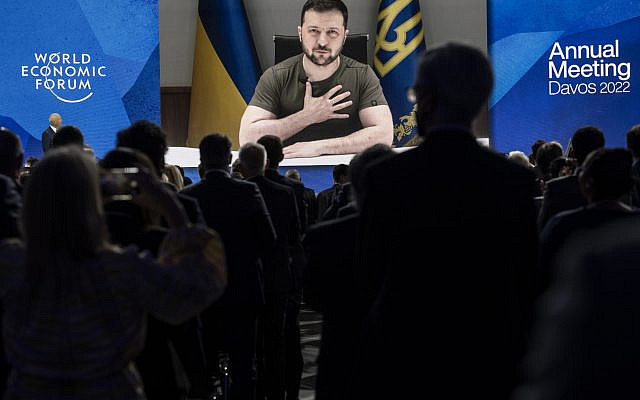 As the Ukraine war drags on journalists are looking for new angles, and so we have reached the point of introspection. In this way the world’s latest major flare-up has made up ground on the veteran Israeli-Palestinian conflict, with its endless kerfuffle over media bias. Ours is a turbo-charged era indeed.

Appearing on the Tel Aviv-based international channel I24, I was asked whether journalists have an obligation to be more impartial than they have been, by and large, in covering Vladimir Putin’s invasion. It is something I’d often pondered  at AP during coverage of conflicts, where I often found myself pushing for more analysis and dot-connecting. It was never more so than with the Israeli context, with its competing narratives, fuming partisans, and genuine moral complexity.

On the show I argued that there is a difference between fairness and impartiality – as, for example, impartiality toward mass murder would be inhuman. Proponents of the Anglo-American school often deride European reporters for excessive personal perspective, but perhaps the opposite extreme is also not quite right (and what’s worse, often both feigned and unbecomingly self-righteous).

“One of the challenges (in) journalism is to not just say ‘one side says this and the other says that’  –  because one side might be lying, or lying more, which (occurs) more often,” I said. “Putting things in context, as opposed to what’s being called bothsidesism, is important in complex events.”

A case in point discussed on the show might be Russia (the undisputed aggressor) somehow blaming Ukraine for the disruption of shipments of its own grain (causing a crisis in Africa and elsewhere) when in fact the Russian navy is blockading Ukraine’s ports. I suggested that when the situation is bewildering, access limited and propaganda deafening, one might consider who benefits.

In this case, Russia has an evident interest in creating a global grain crisis in order to compel African and other countries to sound the alarms. That in turn might embolden those around the world (like Henry Kissinger) who in the name of realpolitik would like to see Ukraine concede a little – perhaps territory in the Donbas? – to enable Russia to stand down with a victory narrative of sorts.

Here too, the Israeli parallel is interesting. Israel is an oppressor in the West Bank, yet also by far the more democratic and introspective party. Both sides are to blame for the failure of peace talks, but my assessment is that the Palestinians benefit  from failure to partition the Holy Land (as long as they’re willing to suffer for a few decades more), because a non-Zionist binational state will result.

My effort to connect the dots concludes that this is the goal, it is why they’ve not usefully engaged with peace offers, and the Israeli right is too blind to see it and so unwittingly assists with West Bank settlement expansion, deepening the mutual entanglement. It is not a popular analysis – not among the foreign press and not among partisans of either side. But that doesn’t make it wrong, and it does have its supporters

With Ukraine, it certainly could also be argued that the presence of so obvious a bogeyman as Russia’s Vladimir Putin — with his diabolical toolbox of poisonings, sham trials, election interference and other monkey business — causes the media to paint too rosy a narrative of a heroic and scrappy Ukraine. Ukraine is far from a perfect democracy: it suffers decades-long corruption and excessive oligarch power, a politicized judiciary with dubious arrests, some reliance on far-right extremists and more. Perhaps such shortcomings have been underplayed because Russia, with its brutal police state and naked imperialist ambition, so vastly more horrible.

Is that defensible? Some might argue that life is just too short, all things in it are relative, and imperfections are not equal. The latter is especially true, and it is officially called false equivalence: everybody lies, but not everybody lies with equal frequency, relevance or vehemence (if uncertain, consult Politifact).

And what about the moral side? The I24 host Ellie Hochenberg asked whether the media was to blame for somehow prolonging the war by not covering it these days as much as in the recent past. This question, of course, implied the media was duty-bound to hasten the war’s end – which sounds reasonable but might actually offend the more purist American pencils. It reminds me a little of the calls on the media to fight the occupation or resist Palestinian terrorism.

All of it touches on news judgment – the holy grail of everything in journalism. There is often tension between what reporters think is important and what the market finds interesting, and ignoring the demand side can seem suicidal for an industry already on the brink. That’s why you get huge headlines, salacious scandals and clickbait photos.

Should the media report more about Ukraine? I quibble with the one-story paradigm that AP also fell into in recent decades, flooding the zone with content about the top story (when a certain threshold is crossed – say, the 2011 tsunami and nuclear disaster in Japan). As a news consumer I tend to run away from the “one” story myself. But certainly the pendulum can swing too much in the other direction.

“International media is part of a business that is very distressed right now,” I replied. “They don’t have foreign correspondents everywhere; they cannot cover every story. It has to be interesting. The news is interesting to people when it is new. This is why we have waning interest in (what) has become a war of attrition. Even though on the ground you have new tragedies every day from a distance the story looks the same.”

The Palestinians, too, sometimes want more attention (but not to terrorist attacks). For its part Ukraine may be lucky to be getting the attention that it has received. There are plenty of conflicts – say, in the Tigray region of Ethiopia – that for a variety of reasons get hardly any coverage at all. There are plenty of places – for example Armenia, still chafing at its disastrous and under-reported war with Azerbaijan in 2020 – where there are no foreign correspondents at all.

Who appoints these journalists to decide which facts matter and to explain what they mean? I have no answer other than the free market. That puts a lot of faith in the wisdom of a crowd that can be fickle and ignorant, but it is better than governments handing out licenses or guilds preserving some privileged caste.

Journalism may be a business, a calling and a public service. But an exact science it is not. It is also not a vast conspiracy.