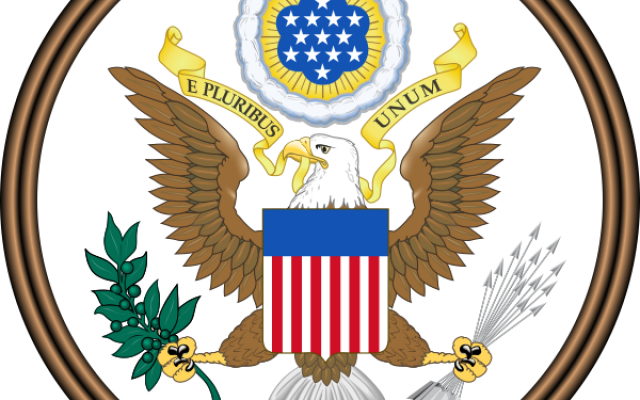 The Great Seal of the United States. (Wikipedia)

When I left for Israel to celebrate the dedication of the United States Embassy in Jerusalem, my kids asked me why I was making a trip that is so far away for such a short stint of time. Without thinking much, I replied, “I was not alive in 1948 or in 1967. But, being alive in 2018 for this miracle, I am not going to miss it.”

This moment for Israel is indeed another notch in our list of miracles, this time, that my age orbit can appreciate. One day, we will look back on this event as another watershed moment in the history of our great nation of Israel.

I will admit however, that being a proud Democrat, a Conservative rabbi as well as being a song leader in a band of people unapologetically calling out President Trump for many behaviors and statements, has made me feel like a fish out of water in this environment. I am sad that no elected Democrats are here in Jerusalem with me. It was after all, Bill Clinton, a Democrat, who in 1995 signed into legislation (by a landslide vote of 95 to 3) of the United States Senate to move the Embassy to Jerusalem. Being here could be seen as endorsement of Bill Clinton.

In 2016, Hillary Clinton pushed for a party platform that stated, “Jerusalem shall remain the capital of Israel.” Kamala Harris, Democratic Senator from California affirmed the 1995 legislation passed in Senate just months ago, declaring that the embassy should be moved to Jerusalem and to “abide by [the 1995 law] provisions.” I watched the likes of George Mitchell and Chuck Schumer and Steny Hoyer celebrate this move and call it a long time in the making.

Ambassador David Friedman and his immediate predecessor, Ambassador Dan Shapiro stood shoulder to shoulder at the Ministry of Foreign Affairs reveling in this moment. They were appointed by Trump and Obama, respectively. Both have been outspoken in favor of this decision. Shapiro, an Obama appointee, has written in The Washington Post, The New York Times, and The Wall Street Journal along with many Israeli papers why this embassy move is good and right. It is beyond partisanship; it transcends politics. It is about what is right and good and normative.

If all that is true, why are current elected Democrats not here with me?I miss them by my side. I need them here by my side. 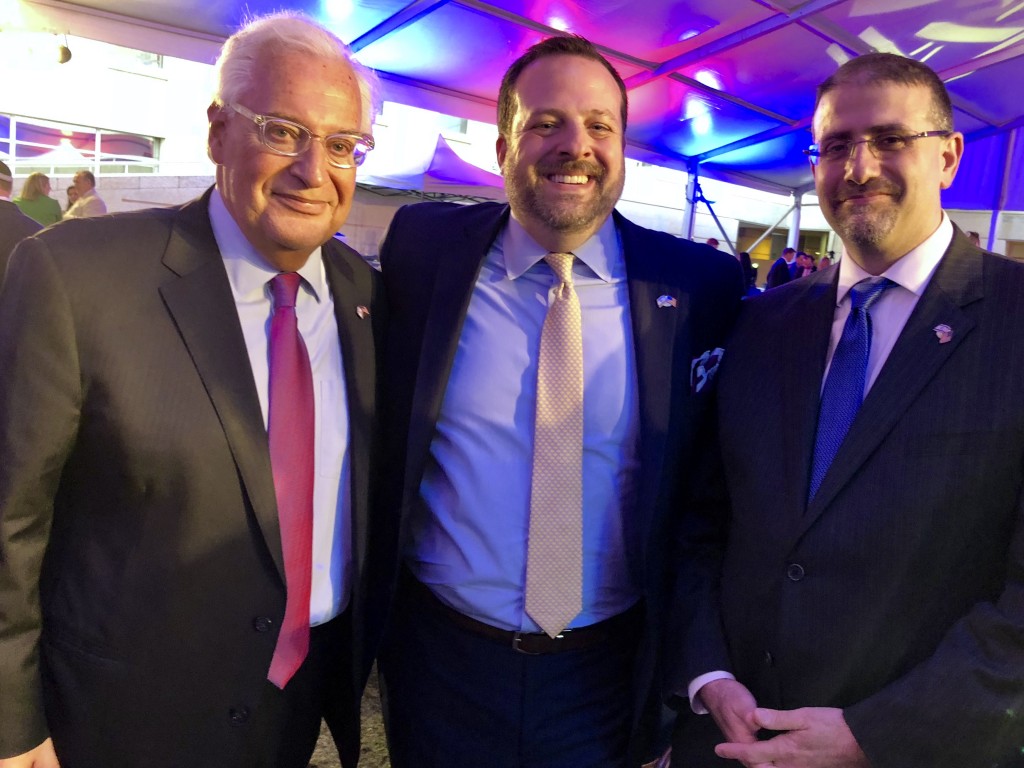 In Israel, the move of the embassy to Jerusalem is celebrated by all parties. Last night Buji Herzog, the head of the Zionist Union, (part of the opposition) sat in the front row applauding this historic moment with members of the Likud, the Jewish Home Party, Yesh Atid and more in what is seen as an obvious and unanimous view to formalize the capital of Israel in Jerusalem. There is no daylight between political factions in Israel on this long-awaited move. Some left-leaning leaders even ask, “Why did we have to wait 70 years?”

I have not seen a mass of Conservative (Jewish) colleagues at this momentous event, and that makes me feel lonely too. Our Conservative Movement did endorse the move by President Trump to recognize Jerusalem as Israel’s capital and asked that the embassy move happen swiftly. It also called for using this moment as a catalyst to progress negotiations towards two states for two peoples. So, why are so few from my religious denomination present?

If most Democrats agree with Republicans, and our movement is on board too, and all sides of Israelis seemingly agree, why is this event being made into a partisan pie? Should not we all be afforded to enjoy its sweetness and delight?

Last night, I was fortunate to have my picture taken next to the very pen that President Harry Truman used to sign a letter recognizing Israel as a state, shortly after after David Ben Gurion made his declaration of Independence. The United States led the way for other countries to recognize what the United Nations deemed six months earlier to be our course to follow: that Israel is a Jewish state and Jewish homeland. The United States did what is does best: it leads and others follow our examples. That is what makes us a land and a people of courage and bravery who pursue justice and good. Since Truman’s leadership, other countries followed the United States, and now, other countries again are following. Guatemala and Paraguay are each opening their own embassy in Jerusalem later this week. More will follow our lead. 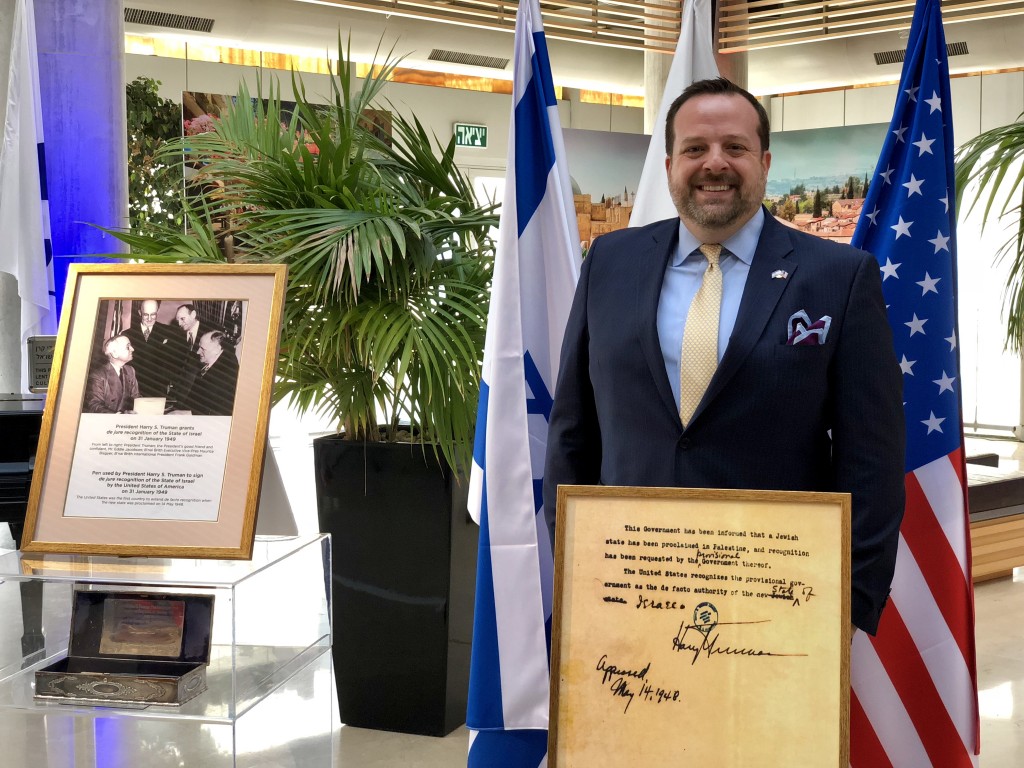 When Ben Gurion declared our state on May 14, 1948, Israel made its capital in Jerusalem. The Knesset met on King George Street at the Frumin House, in what is now the center of town, before it moved to its current location in 1966. The High Courts of the country have always been located in Jerusalem. It is where Eichmann was tried and found guilty in 1961. Jerusalem has been where heads of state meet, dine, and stay while visiting this country. It is and will always serve as our nation’s capital.

The new embassy is located in the Arnona district of Jerusalem, squarely outside of the infamous Green Line. That means that in any and every solution of two states for two people that have been negotiated over the years, this part of Jerusalem is to remain part of the Jewish sovereign state. Further to that point, this part of Jerusalem was in Jewish hands since 1948. Those fighting this embassy decision are not advocating for 1967 lines for two states for two people, they are asking for 1947 lines that have no delineation, place, or space for the Jewish state or its people. The absence and silence of those who chose not to attend this historic day give fuel to that absurd and bigoted stance.

I am proudly part of a group that looks forward to the day that a Palestinian embassy is inaugurated in East Jerusalem, serving as the capital of a future Palestinian state. I hope that moment will be the dawn of a new reality and a renewed sense of hope for a much-deserved homeland for the Palestinian people. I pray that these two states and two peoples will live side by side in peace and aspire towards harmony.  This United States Embassy and its location in no way precludes that possibility. In fact, I think it emboldens it.

Today, I am donning my suit and tie, putting on a new kippah — and I have packed tissues for that magical moment when the Star-Spangled Banner will be followed by Hatikva and the unveiling of that eagle on our emblem which will adorn the walls of our United States Embassy in Jerusalem. These anthems, those symbols and that moment, representing both my homes and my peoples, will be a culmination of 70 years of seeking a recognition and realizing its arrival.

I am sure the struggles for this small and holy strip of land in the middle of the world will continue to face serious internal and external threats, some existential in their nature, after this day. Our journey for recognition and acceptance is far from over. I am afraid my kids will have the same inheritance I was given from my parents: an amazing and indescribable homeland that needs me to advocate for her continued survival. But this one day is about pausing and appreciating this moment, relishing with delight in its arrival and then moving forward. I am here, with a front row seat for history.

About the Author
David-Seth Kirshner is the senior rabbi of Temple Emanu-El, a Conservative synagogue in Closter, New Jersey. He is the past President of the NY Board of Rabbis and the NJ Board of Rabbis and is a Senior Rabbinic Fellow at the Hartman Institute. Rabbi Kirshner was appointed to the New Jersey/Israel commission and is a National Council member of AIPAC.
Related Topics
Related Posts
Comments