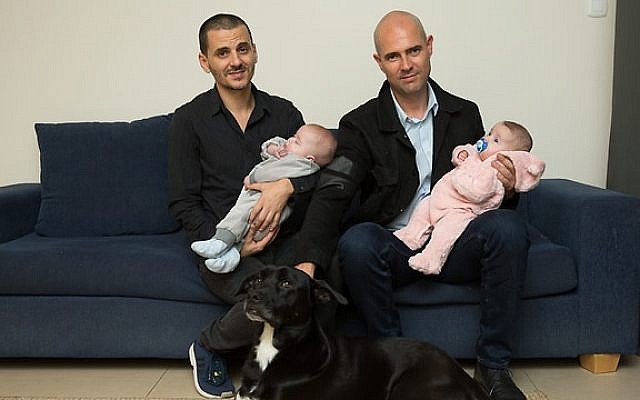 Ochana (to our right), presently the only openly gay MK (Likud), here with his partner and their two kids

This new idea of an Israeli gay political party, if it works, it won’t.

If enough people would vote for such a party, there are two possibilities:

On top of that, on all kinds of issues , they will need to vote Right (losing the Left), Right (losing the Right) and Center (losing everyone else). If it will be just a Left-wing party, join the Left. Don’t politicize the issue. Human rights are not owned by the Left, Center or Right.

The statement that only GLBTQ can represent their causes is untrue too. There is nothing more powerful than a well-informed Ally speaking out.

In other words, I think that there is no alternative for the hard and frustrating work to make further inroads into the mainstream parties, win allies and keep them.

Last but not least, a separate Gay Party is completely unnecessary. GLBTQ rights are so popular in Israel, any major party that’s not standing for them will lose a lot of voters. The only -only!- thing that blocks gay marriage, gay adoption, gay surrogacy, a ban on conversion therapy and on badmouthing any societal group and stiff penalties on bullying is the blockage by the marginal ultra-Orthodox and Muslim parties. That means that “gay” rights (these things will protect so many more people than just gays) will be won as soon as enough Centrist parties will join a government to break the ultra-Orthodox stranglehold.

Therefore, don’t give too much honor to the gay-haters. The few people who allegedly bother them, end that. Nothing can stop the future and especially not ignorant people. Leave them. If you must do something, file police complaints about them spreading bigotry.

In related “news,” in an advantage of the silly season, a Dutch publication now found a report from December of Australian research that showed that relationships of same-sex couples are at least as good as of other-sex pairs so that the former can be recommended for raising children. (Because it is already scientific knowledge for decades that gays and lesbians have more empathy, this finding confirms the obvious, but fortunately or unfortunately, that’s what science often is about.)

And just started in Paris: the 2018 Gay Games 10, largest sporting event ever. “The Gay Games is open to all, young or old, athlete or artist, experienced or novice, gay or straight …  and no individual shall be excluded from participating on the basis of sexual orientation, gender, race, religion, nationality, ethnic origin, political belief(s), athletic/artistic ability, physical challenge, age, or health status.”