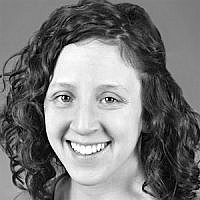 The Blogs
Abigail Russo
Apply for a Blog
Advertisement
Please note that the posts on The Blogs are contributed by third parties. The opinions, facts and any media content in them are presented solely by the authors, and neither The Times of Israel nor its partners assume any responsibility for them. Please contact us in case of abuse. In case of abuse,
Report this post.

A few months ago, my friend Avi paid a shiva call. As soon as he approached me, he grabbed my arm and said with urgency, “I know what you need to write about next.” This thrilled me, because I didn’t have so much as a seed of a new creative idea, and was eager to sink my teeth into anything that would moor me in the days after losing my grandpa.

Wow. His words touched the part of me that was most tender in that moment, standing as we were in front of a wall of cherished family documents that my grandparents had meticulously restored and preserved over decades. At my bat mitzvah, my grandma presented me with a framed letter written in 1911 from my great-great-great-grandfather in Russia, Avraham Simkin, to his newly emigrated son in Pennsylvania. Written in Yiddish, Avraham painted a vivid picture of shtetl life defined by Jewish communal practice, and also expressed his fear for the future as an informant continued to jeopardize the livelihoods of local Jews. My grandma and her sister spent many years of collaborative work painstakingly translating dozens of such family letters from Europe, letters that gave shape to my family members’ lives and struggles over decades until the 1940s, when the letters were no more.

I am part of a generation of American Jews whose grandparents lived through countless historic events, both tragic and triumphant. Many of our grandparents fought in world wars, survived the horrors of concentration camps, and watched Jewish life transform worldwide with the establishment of the State of Israel. I was lucky to spend many years with my grandparents, who were prolific in their storytelling and generous with their perspectives on culture, history, and politics. We debated freely on these topics, and would inevitably reach for different facts and perspectives when making our points. Though I sometimes left these discussions feeling frustrated, I acutely miss them now. We saw the world differently, but my grandparents’ keen sense of history forced me to be sharper and more nuanced with my arguments.

As my mom and her siblings sorted through decades of documents in my grandparents’ home office, they found the speech that Grandpa gave at my parents’ wedding. In an effort to reach out to my father’s Sephardic family, Grandpa worked with a local rabbi to translate his speech into Ladino. I was amazed. Amazed by the effort Grandpa took, but even more amazed by my grandparents’ closeness to Yiddishkeit and Ladino that necessitated this cultural exchange. 41 years later in my Boston Jewish community, there is representation from a rich diversity of backgrounds and paths to Judaism, both geographic and spiritual. Nonetheless, for those of us who were born into Judaism, our relationships to diasporic countries of Jewish origin are generally several generations removed.

This distance feels particularly acute as I watch with horror as war unfolds in Ukraine. My grandparents fought tirelessly in the movement to free Soviet Jewry in the 1970s and 1980s. They watched the world break apart and reorganize itself geopolitically over the course of the 20th century; if they were alive today, they would bring perspectives to our conversations on European politics that I can now only imagine. They would highlight the strong threads that continue to connect our family to Eastern Europe, connective threads that I don’t generally feel in my daily life. They were avid world travelers, always with an eye on the state of affairs for local Jewish communities. They felt inextricably linked to Jews around the world, and a deep and abiding pride in seeing Judaism survive and even thrive in the toughest of conditions. Though I had no shortage of education on antisemitism and centuries of Jewish struggle, my grandparents and their peers felt the fragility of Jewish peoplehood more acutely than I do because of all they had lived through and witnessed. I fear that we will fail to capture and immortalize the unique lens through which our grandparents saw the world. What happens when our direct links to key events in Jewish history are weakened, or break altogether?

In the aftermath of losing Grandpa, I feel like I am standing at the edge of a precipice and I can’t see what’s at the bottom. What comes next? For my entire life, Grandpa has put on a Pharaoh mask midway through our Pesach seder to perform “Let My People Go,” with dancing and drama and occasionally a crying toddler. The only thing harder than anticipating that Grandpa won’t be dancing in his pharaoh mask is the thought that nobody will ever wear it again. It’s just one of many “what now?” questions pinging around my brain. Who will tell my nephews about the Ukrainian town of Shepetovka where my great-grandparents lived, or about the evolution of egalitarianism in Jewish American communities throughout the 20th century? Even in my grief, I can recognize that much of my defeatism is exactly that—grief. And though some might say that we millennials are prone to thinking of ourselves as exceptional, I know that this problem isn’t unique. With each generation that passes, we lose our primary sources of insight into what it looked and felt like to live through a particular moment in time.

As we approach Pesach, I look to the Haggadah for guidance on how to move forward in the face of loss, not just of my grandparents but of a generation of Jewish wisdom and experience. In a few days, we will be instructed to relive the Exodus story as though we too escaped from Egypt. Every year I struggle with this instruction. Isn’t it a bit trite to pretend like I’ve experienced something that I haven’t? Or worse, is it an attempt to appropriate an experience of struggle that isn’t mine? I proudly claim both my Ashkenazi and Sephardic heritages as my own, and yet it feels like an exercise in fiction to imagine myself in the shoes of my ancestors living in Russia, Turkey, and Greece.

Rabban Gamliel tells us that we are obligated to explain three essential components at the seder: the Pesach sacrifice, the matzah, and the maror. But after that it’s anybody’s guess, as we’re given no details on which pieces of the Exodus story we are required to share. Indeed, we’re told that “​​one who expands on the story of the Exodus from Egypt is praiseworthy.” This permission to put our own spin on ancient stories both comforts and scares me. When the choice is ours, what do we choose to highlight and what do we choose to omit?

My grandparents would be proud that we preserve the items and honor the traditions that tie us to our past. The framed Yiddish letter on my wall reminds me where I came from, but it would be wrong to leave it at that. We need to capture our own experiences to share with future generations, even if in the moment they seem ordinary. One day when we tell future generations about the resilience of Judaism, we won’t only speak about the pogroms of generations past, but also about Jewish strength and evolution in our own time. I will share that after two years of isolation due to COVID-19, my shul gathered for its first kiddush with a joy that can only manifest over crackers and egg salad and teeny-tiny cups of grape juice. I will explain that when that same pandemic skewered our plans for a wedding with extended family, we still managed to prop up chuppah poles in our dining room, the same chuppah poles that family members have used for nearly 50 years. When we gather to tell stories, our retellings won’t just be watered-down versions of our ancestors’ tellings; they will be evolved narratives, valuable in their own right.

Perhaps not this year, but I hope that someday soon someone else in my family will take on the pharaoh mask and make the tradition their own. Traditions aren’t meant to be frozen in time, even those that were brought to life by someone we loved and lost. This year at our seders, let us add new twists to old stories, and honor our ancestors by adding new layers to the foundations they laid for us. Chag kasher v’sameach.

About the Author
Abigail Russo is an international development professional based in Boston, Massachusetts. Her collaborations in international education and global health have spanned East and Southern Africa, South Asia, Australia, and across the United States.
Related Topics
Related Posts
Comments