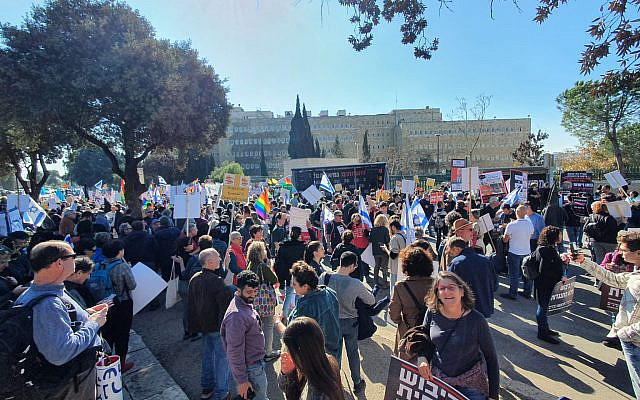 Alas, she has become a harlot,
The faithful city
That was filled with justice,
Where righteousness dwelt—
But now murderers.


Your rulers are rogues
And cronies of thieves,
Every one avid for presents
And greedy for gifts;
They do not judge the case of the orphan,
And the widow’s cause never reaches them.

Last Thursday, I attended a protest demonstration with thousands of other concerned citizens from all over Jerusalem and Israel to protest the installation of the most extreme right-wing, anti-democratic, and dangerous government ever to be established in the brief 75-year history of the modern state of Israel. As I walked into the area where the demonstration was taking place – around the corner from Israel’s parliament, known as the Knesset — I saw a man with a red t-shirt with the inscription above from the prophet Isaiah on the back of his shirt! The biblical prophet Isaiah was railing against the leaders of his time, but the words could not have been more relevant today!

It is impossible to imagine that such a government has come to be. The Prime Minister is currently undergoing a trial in court in Jerusalem for major counts of corruption, including bribery and breach of trust. In a normal country, he would have not been allowed to be the head of state! The new Minister of Interior, Rabbi Deri, is a well-known criminal, tax-evader and scoundrel—who has already served time in prison for his crimes– and the new members of this extreme Knesset had to pass a special law last week to allow him to be appointed as a minister in this government. This legislation will be reviewed very soon by the Supreme Court of Israel, and it is possible that it will be rejected! (But don’t worry, PM Netanyahu has another plan up his sleeve: to appoint this well-known thief to be Alternative Prime Minister!). The new Minister of National Security (the Police +), Itamar Ben Gvir, is a well-known inciter against Arabs. He has been indicted and arrested many times for inciting to violence, including violently protesting the Oslo peace accords and for supporting the political party known as Kach, led by Meir Kahane, which was banned from running for the Knesset in August 1985 after one term due to its unabashed racism (too bad this didn’t happen this time).

I could go on, but you get the point. As Isaiah said, this is indeed a government of rogues, thieves and cronies.

But it is worse than that. This is a government that is unabashedly anti-peace, avowedly pro-annexation (of the West Bank), and anti-Arab (referring to the Arab citizens of the state of Israel). Its leaders want to change the policy on Temple Mount, Harem El Sharif, so as to antagonize the Palestinians and the Muslim world, even if it means more violence in Jerusalem and the West Bank and another war with Gaza. Indeed, the Minister of Internal Security, took a stroll on Temple Mount this morning, to show who is boss and to provoke the Palestinians and the Arabs all over the world. Moreover, as part of their anti-peace plans, they are promising to increase settlements and continue the Occupation forever. This government plans to clash with the international community, the American government, the Jews of the Diaspora and any one else along their way. They (and especially their “leader”) simply don’t give a damn any more.

In addition, they have concrete plans to “reform” the system of justice in Israel, which are very scary and fundamentally anti-democratic. If they succeed, Israel will be further down the road towards fascism, with the Knesset able to pass any law that it likes, with no judicial review. They can go completely crazy, which they apparently intend to do.

Moreover, one of their goals is to cancel the trial of their cult leader, Mr. Benjamin Netanyahu, otherwise known affectionately by his followers (and himself) as “Bibi”. After all, this is the main reason that he has sunk to this new low in his political history. He has knowingly brought in the most extreme elements in Israel society into his coalition, so that he won’t have to be judged fairly in a court in Israel, thus avoiding the prison term that he has feared for so long. Very clever indeed. But ultimately this move has presented Israel with an unprecedented situation of serious challenges and confrontations.

Will Israel remain a Western style liberal democracy? Or is it moving very quickly into Hungarian or Trumpian authoritarianism as its mode of government? Will the cult of Netanyahu ever end? Or will his groupies rally round him forever? Are there no sane people left in the Likud who might rebel or leave the cult?

Is this a passing phase or is this the future of Israel? Can this be stopped? Will there arise a serious opposition to all these authoritarian anti-democratic moves? For example, will justices resign when the justice system is seriously and systematically threatened?  Will ambassadors resign, as did Israel’s ambassador to France, a few days ago, because she realized that she could not defend the policies of this new government? Will civil servants resign, as did the Director-General of the Ministry of National Security, after he realized that he could not in good conscience serve under the incoming Minister of National Security, whose anti-Arab attitudes are well known?

Will there be an uproar in civil society, which will reject these moves as deleterious to the maintenance of democracy and fairness in Israeli society? Instead of a thousand here and a thousand there, will hundreds of thousands of Israeli Jews and Arabs –or millions– take to the streets to protest the anti-everything and anti-everybody (except themselves!) policies of this new government? One distinguished member of Knesset –Gadi Eisenkot (formerly the Chief of Staff of the Israel Defense Forces) –from a so-called centrist party recently said that if this government comes about (and sadly it has happened!), then there should be a million people protesting in the streets! Where are you Mr. Eisenkot? Will you lead the marches and demonstrations in the weeks and months ahead?

There are many questions in the air here in Israel now and a sense of great anxiety as to where the country is heading.

Will American Jewish groups host extremist ministers from this government when they try to speak in their communities abroad, or will they refuse on moral grounds, as the British Board of Deputies has already done, and as some organizations like T’ruah ,the Rabbinic Call for Human Rights, have already announced that they will do?

Will American Jewish organizations that bring groups to Israel conduct business as usual? Will conventions of American Jewish groups, such as the upcoming convention of the Central Conference of American Rabbis (Reform/Liberal/Progressive) just have ordinary meetings? Or will these rabbis feel the sense of urgency that we feel in Israel to speak out about the dangers of this new government? In the spirit of Isaiah, will they criticize and rebuke some of the worst policies that this extremist government will promote?

One thing is for sure. These are not ordinary times in Israel. We are in the grip of a very dangerous, anti-democratic Jewish supremacist revolution here, one that threatens the essence of what the state of Israel was meant to be, at least according to its founders (as delineated in our Declaration of Independence of May 1948). Will we survive this? Will we find a way back to our original goals? Is it too late?

The same prophet Isaiah who warned us of having a government of rogues, also gave us some guidance that we ought not to forget. Indeed, perhaps this idea can still guide those of us in civil society and the Knesset (our parliament) who are now in the opposition and need to fight for the moral and democratic character of our country.

Wash yourselves clean;
Put your evil doings
Away from My sight.
Cease to do evil;

Learn to do good.
Devote yourselves to justice;
Aid the wronged.
Uphold the rights of the orphan;
Defend the cause of the widow.