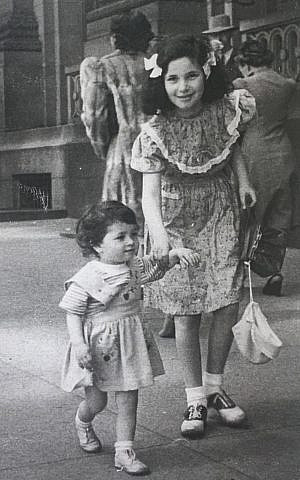 My mother and her big sister in Seattle, Washington. Picture taken by my grandfather.

These days, if you ask me where where I come from the answer is not so simple – my roots are in New York, I raised a family in Michigan and now I have made Aliyah to Modi’in.

But ask me who I came from and I will readily share the narrative of my family’s story.

If you were at my table, I would ask you to share the same.  For I am a time traveler in life and in conversation.  I am intrigued by the hold that our past has on our present and how its story shapes our future.

I think that it why I have always connected to the words of Moshe spoken in the final hours of his life contained in the early verses of this week’s Parsha.

I have loved these words because they have been my invitation to weave the thread of history from my ancestors standing on the shores of the Jordan River to my present.  I have loved to think that I was there, somehow, in the mind’s eye of the founding generation of our people.

Yet, I never truly understood my presence along side them.  It was only by reflecting upon a roots trip taken this summer with my parents to their birthplace in Seattle that I finally grasped the intent of Moshe’s parting words.

On the way to my mother’s childhood home, we passed her old school bus stop.  She recollected that her dad would always be at the stop waiting for her to come home since her mom worked long hours.  As we passed that corner, I could visualize my mom walking off the bus and my grandfather reaching out to proudly clasp his little daughter’s hand.  It was as if my grandfather who had been taken on Kristalnacht and rescued from Dachau had crossed the world to arrive just at this moment.

“Then,”  she said, “they would walk the block to the house together.”  As she reminisced, I imagined the give and take of their conversation – this man from Iluk, Yugoslavia and this little American girl.  I imagined my mother skipping along my grandfather’s side lightening his gait and bringing  joy to his stride.

As my mother arrived at home in her memories, we pulled up to her childhood home –  a small white corner house, hidden behind rose bushes and hugged by a porch sagging under  the weight of an old rocking chair.  We opened the garden gate and began to climb the stairs.  It had been fifty years since my mother had last walked up them and a generation more since she had been that little girl coming home.

With hesitation she rang the doorbell – both of us wondering whether the door would be opened to the past.  A dog barked and then a young woman, phone in hand, opened the door.  We explained who we were and why we were there and she invited us in to step back in time.

I followed my mother’s footsteps with a camera in hand and a listening heart.  “New windows,”  she said as she walked  the short distance from living room to kitchen and peered through the glass.  “There used to be a peach tree in the back and every year my mom would make preserves keeping them in the cellar.”  Then together we reflected on the tastes of my grandmother’s Viennese torte and Kokosh and the chocolate chip cookies – so American – which she was always working to perfect.

My mother marveled at the living room, now filled with color.  In her day, the house had been simply furnished but how grand had been the hopes it contained.  It had been her big sister who had been privy to the journey across the world from 1938-41  who had asked her parents for both a little sister and a house in their new country.   To both wishes, with no lack of challenges, my mother’s parents, Gusta and Morris had obliged.  It had also been her big sister with a poet’s soul and an artist’s eye who had strived to fill the house with beauty and to shelter her little sister from the world which lay beyond its walls.

Then as we turned into a small corridor, we bumped into the woman who had let us in. She was coming out of one of the bedrooms book-ending the hallway.  “That was my room,” my mother said. “Mine too,” said this young woman who now introduced herself as Robyn.  She then asked my mother, who she was.  The query was not so much for a name and an address but more of an existential question – as in what in your life’s story motivated you to travel across country and time to my little home?

My mother explained how she had grown up in this house as the daughter of survivors. “Maybe Robyn had heard about the Holocaust?” my mother asked.  “Of course,” she said, “I was raised Jewish.”

The visit wasn’t very long, maybe ten minutes.  As we readied to leave, my mother blessed Robyn with a good life.  My mom had earned that right and Robyn had earned the blessing.  After all, they were two people now uniquely connected by the knowledge that each had secrets kept by the very same walls.

As we moved towards the doorway from which we had entered, we noticed a bump on the right door post.  Robyn told us that it was just a few weeks before that she had realized what was beneath the cracked white paint.  She had grown up with one of them, “a Mezuza,” she recalled.  She said that the recent past had been difficult but knowing that a Mezuza was on her doorpost she had felt protected.

Both my mom and I began to cry.  My grandfather had put that Mezuza up nearly seventy years before and there it remained for all those years – a beacon of protection and love not only for the children, grandchildren and great-grandchildren who had been born of his dreams but also for this young woman – a stranger in person but kindred to our Jewish soul.

It was then that I understood, how, in fact, time could conflate so that I could be present at the shores of the Jordan there alongside my ancestors.  I see them now.  Men and women standing in the shelter of G-d and of their beloved teacher, Moshe.  Their faces weathered by the challenges of their travels and concerns of the tasks which lay ahead.  Yet, their faces are shining.  Have they not wandered and believed just to arrive at this moment – to build with resilience and vision a nation and a home in a new land.  I see them reaching down to grasp with fortitude the hands of the future they are dreaming of – the hands of my grandfather, my mom, Robyn and me.  And yes I am there.  And I am here.

So as you move forward into this New Year don’t forget to turn back.  Look for all those hands that have reached out to hold you, feel the strength of their grasp on you, look up into their eyes, remember their dreams and your own and skip forward.