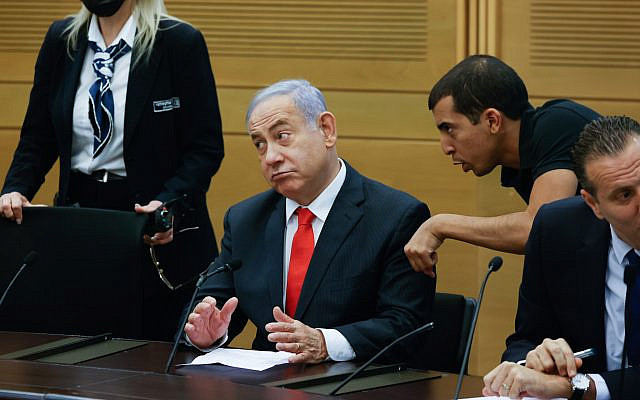 Head of opposition Benjamin Netanyahu leads a meeting of the right-wing parties, in the Israeli parliament on June 14, 2021. (Yonatan Sindel/FLASH90)

Barely a week after passing a necessary expanded “minister replacement” (“Norwegian”) law in the absence of the wherewithal to undertake a more comprehensive long-term enlargement of Israel’s parliament, the new Bennett-Lapid coalition is engaged in a bumbling effort to control the Knesset by emasculating the opposition at all costs. This outrageous move is not only politically misconconceived and practically counterproductive, it is also substantively vacuous and fundamentally undemocratic.

A coalition of change is perpetuating a culture of exclusion and intolerance which defies its own meaning. If it hopes to survive, let alone succeed, it still has time to acknowledge and correct its own egregious mistake. It has nothing to lose by granting the opposition its due; it — and Israel’s already mangled political culture — have much to gain by reversing course before it is too late.

Just a week ago, the Knesset plenum approved the proposal of the Arrangements Committee regarding the allocation of parliamentary assignments by a vote of 60:0 (the opposition absented itself from the plenum). In an attempt to protect its paper-thin 61-member majority by monopolizing the working of the house, it thereby completed a wholesale distortion of Knesset procedures and practices, which have traditionally used the relative size of the various factions as the standard for the distribution of committee placements and parliamentary positions. In the process, it skewed the balance between coalition and opposition, effectively diminishing its working capacity without necessarily increasing its own ability to govern.

To add insult to injury, the opposition was granted the chair of only three of the Knesset’s 12 statutory committees: the State Comptroller Committee, as required by law, alongside, once again, Science and Technology and the Committee on the Advancement of Women and Gender Equality. By relative size and custom, it deserved in addition at least one major committee (usually the Economics Committee).

The coalition also declared its intention to carve three new committees (all headed by coalition MKs) from existing committees. A new Health Committee is to be created out of the existing Labor, Social Welfare, and Health Committee. Two committees, one on Internal Security and one on Jewish Religious Services, are to be split from the Interior Committee. Given that there are provisions for the establishment of ad hoc committees on specific topics in the Knesset Rules of Procedure, the bible of the workings of Israel’s parliament, the decision to form new standing committees in this manner is unwarranted.

Finally, to complete the takeover, the Knesset decided to appoint nine (!) deputy speakers, six from the coalition and three from the opposition, upsetting the long-standing norm of near-parity between opposition and coalition in the all-important Knesset presidium (the speaker of the Knesset, representing the coalition, always has the deciding vote). To make matters worse, the government representatives attempted to dictate the names of the opposition deputy speakers — allocating one of the positions to veteran MK Ahmed Tibi of the Joint List (thus leaving only two slots for the representatives of 52 MKs of the right-religious bloc).

Put together, these measures are designed, ostensibly, to cut the wings of what is proving to be an unruly and highly disruptive opposition bent on constantly thwarting government moves and exhausting its representatives in interminable filibusters extending into the wee hours of the morning. Indeed, the opposition has vowed to stall committee work, boycott crucial sessions and, against its very nature, even consider appealing the stomping behavior of the coalition in contravention to the advice of the legal advisors of the Knesset to the High Court of Justice.

At first glance, it may be difficult to argue with the logic behind these moves — which the current government defends by underlining that it is doing nothing different than what its Netanyahu-led predecessor did during recent years precisely because, numerically, it could. This claim is nothing short of self-defeating. A coalition that prides itself on being the precursor of change should not revel in adapting techniques which it found reprehensible when employed to stifle its own voices in the past. Nor should its avowed distaste for the leader of the opposition Netanyahu’s shenanigans justify using the same tools to undermine his influence (Prime Minister Bennett’s taunting speech belittling his predecessor and nemesis, however entertaining rhetorically, did nothing to boost his standing politically). The lack of confidence the new government still feels in its first uncertain days should not serve as a crutch for conduct it finds unsupportable under other circumstances.

The policy of opposition enfeeblement makes no sense. Politically, it undermines the raison d’etre of the new coalition: to prove that the affairs of state can be managed differently — and much more competently — by cooperation between the diverse segments of an inclusive national unity government than by continuously sowing strife, friction and acrimony. It is not only repugnance of the previous leader that should hold its different parts together, but a dedication to a common good. From this perspective, practically, learning to navigate within the confines of a minute majority by deftly building shifting coalitions is much more promising than de facto granting each individual MK in the coalition what amounts to a veto power at any given time.

Indeed, substantively, such negotiations are critical if there is any hope of refocusing attention on the content of proposed bills rather than on their originators (as was the case with the refusal of many women opposition MKs to support a bill that would preserve rape kits beyond the three months mandated today or the now notorious opposition of the right-religious opposition to support its own prohibition of Palestinian family reunification to the delight of the left). Indeed, with a bit of common sense and some humanity, it could be possible to avoid some obvious pitfalls like the inexplicable decision to prevent political prisoner Khalida Jarar from attending her daughter’s funeral or the reluctance to dissociate support for universal early childhood education from measures to promote ultra-Orthodox participation in the workforce.

Above all else, purposely weakening the opposition directly undermines Israel’s already flailing democratic underpinnings. It contravenes the age-old adage that strong oppositions make for strong democracies, both because they incorporate opposites by giving space for thrashing out disagreements non-violently and by laying the foundation for peaceful rotations at the helm via the ballot box.

Israel’s culture of politics is at a nadir. And since democracy is as much about how public life is conducted and who is included as about what is at issue, no serious change can take place by replicating the lopsided and misplaced practices of the recent past.

The coalition still has an opportunity to break with these patterns by reviewing and adjusting its proposals for how the Knesset goes about its business. By showing the courage to correct itself, it not only stands a chance of expanding its capacities on the eve of the ever-so critical budget discussions, but also of enhancing its legitimacy in the eyes of a tired and heavily challenged public.

About the Author
Naomi Chazan is professor (emerita) of political science at the Hebrew University of Jerusalem. A former Member of the Knesset and Deputy Speaker of the Knesset, she currently serves as a senior research fellow at the Truman Research Institute at the Hebrew University and the Van Leer Jerusalem Institute.
Related Topics
Related Posts
Comments
Advertisement