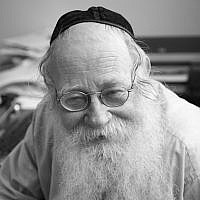 The Blogs
Adin Steinsaltz
Apply for a Blog
Advertisement
Please note that the posts on The Blogs are contributed by third parties. The opinions, facts and any media content in them are presented solely by the authors, and neither The Times of Israel nor its partners assume any responsibility for them. Please contact us in case of abuse. In case of abuse,
Report this post.

After receiving the bitter news about the murder of the three kidnapped boys, a cloud of mourning has descended upon the entire Jewish nation. The only bit of consolation is that probably they did not suffer much, and that now they are attached to the Almighty’s mantle, in a closeness of everlasting fondness and permanent remembrance before Him.

They are now in eternal rest, but we are here with our grieving and our questions.

Many ask: What about all our prayers and supplications to God that now we know were said in vain, since they were already dead?

We should keep in mind that prayers and supplications are not like pressing a button in a machine. Our prayers are an expression of our will to come closer to God – to make our requests, to cry out to Him, and also just to be with Him.

Each and every prayer that was said created some kind of an elevation in all the higher worlds, and these requests and supplication will bring light and deliverance, physically and spiritually, to all those who need them.

We all were like babies cuddling their mother, seeking to be closer, to be held tighter. The prayers are there, and they are a source of grace and mercy for us and for the entire world.

Another question is: Should we launch a campaign of revenge?

It is true that we do have the right to fight in order to protect our lives, and to kill in a war of self-defense, as well as to punish the perpetrators.

But while revenge responds to a human need (however natural and normal the impulse), it is not in our hands: “Vengeance is Mine, and recompense,” says the Lord (Deuteronomy 32:35).

We can ask God to avenge for us and to make our enemies pay for what they said, did, and planned, and He will find the right ways to do that even in this world, until we shall all see how “He does avenge the blood of His servants, and renders vengeance to His adversaries” (Ibid., verse 43).

What, then, can and should we do?

We should do Kaddish.

In saying Kaddish over the dead, we promise to fill the gaps created by their passing, and to continue doing whatever we can so that “His great Name may grow exalted and sanctified.”

But saying that is not enough: each and every one of us should also act as best he or she can in order to do Kaddish – by studying more Torah, by fulfilling one more mitzvah, by our physical actions or by giving of our time and money to those in need. Our acts do not serve to elevate the souls of these boys – for they are in a supreme spiritual level that needs no further elevation. Our acts elevate our own souls, curing all the lacks that were and still are in our world.

Furthermore, although our hearts are filled with weeping, we should also make sure that they will also be filled with joy. The prophet says: “You only have I known of all the families of the earth; therefore I will visit upon you all your iniquities” (Amos 3:2). The pain is concrete and live, but it is a healing pain. Let us thank God, rejoice in our being the chosen ones, and endeavor to fulfill our mission with faith and joy.

About the Author
Rabbi Adin Steinsaltz is the founder of Shefa and The Israel Institute for Talmudic Publications. In 2012 he completed his monumental, 45 volume translation of the Talmud into modern Hebrew. The Steinsaltz Talmud has been translated into 29 volumes in French and 5 volumes in Russian. In 2012, the first volume of the “Koren Talmud Bavli” in English with Rabbi Steinsaltz's commentary was published. Adin Steinsaltz was awared the Israel Prize, the country’s highest honor, for his educational achievements in opening the Talmud and was was among the first recipients of the Israeli Presidential Award of Distinction, for his contribution to Israeli society and its standing in the world. In 2012, Rabbi Steinsaltz received a National Jewish Book Award for the English Koren Talmud Bavli from the Jewish Book Council (USA). He was also the recipient of the French Order of Arts and Literature.
Related Topics
Related Posts
Adin Steinsaltz
Comments