There are the Jewish heroes we know, of whom we are proud, about whom we can read and learn. And there are others that carry out their work for the Jewish people in the shadows – quietly and below the radar.

Such a hero passed away last week – Rabbi Abraham Hamra z”l, the former Chief Rabbi of the Syrian Jewish Community.  He became the rabbi of the community in 1976 at age 33.

I first met him when I was a young Jewish communal professional at the American Jewish Joint Distribution Committee in the early 1990’s, where I was responsible for dealing with the Jewish community in Syria, which then numbered 4,500 people. The community lived in an uncertain environment under the ever-watchful eye of the Mukhabarat, the secret police.

Rabbi Hamra would fly from Damascus, I would fly from New York and we would meet in Zurich and other European cities. He would always arrive with his ever-present warm smile, regardless of the dangers that surrounded him and his community.

We would sit in a nondescript hotel room for hours, oblivious to the picturesque winding streets, the chocolate shops and the exquisite pastries just outside the door.

We would first talk about family and then spend many hours discussing the situation of the Jewish community in Syria. Gifts were exchanged – his was usually a box of baklava fresh from Damascus.

When our work was done, we would make our way back to the airport – me to return to the safety of New York, he to navigate the byzantine and treacherous political world in Damascus.

When I would visit Israel in those days, I would also think about him – me walking through the old city of Jerusalem, he in his apartment in old Damascus – just a couple of hours drive away, if the world were a different place.

And then the time came in 1992 to bring the history of the ancient Jewish community of Syria to a close.

He was there to lead his people as they left Syria. Carefully, quietly and diplomatically. Many were involved in this delicate and complicated process. He was at the center of ensuring a smooth and low-profile exodus of the Jews of Syria. They initially came to New York, and many continued to Israel.

His time to leave came too, and we had an emotional reunion in New York. He moved to Israel in 1994 and remained deeply engaged as rabbi of the Syrian Jewish community there.

With an impish smile, a deep sense of humility and nerves of steel he led his people to freedom. He is one of the quiet heroes of the Jewish people. 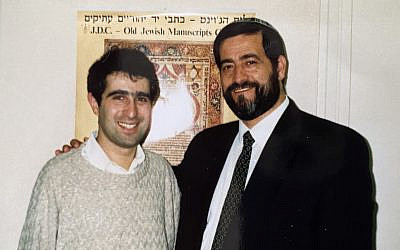 Reunion in New York
About the Author
Gideon Taylor is the President of the Conference on Jewish Material Claims Against Germany (Claims Conference) and Chair of Operations for the World Jewish Restitution Organization.
Related Topics
Related Posts
Comments