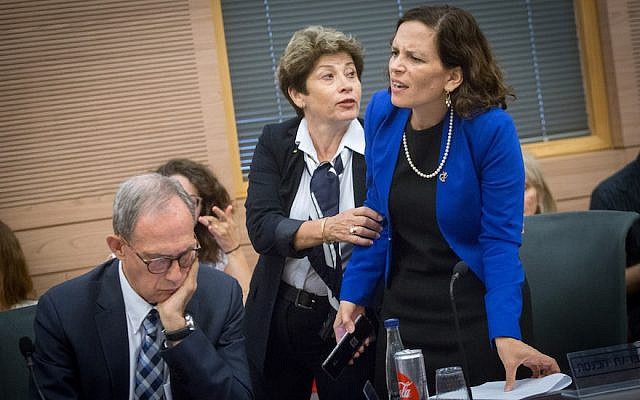 MK Rachel Azaria is taken out by security guards at the joint Knesset and Constitution Committee meeting discussing the proposed National Law, at the Knesset, on July 16, 2018. (Miriam Alster/Flash90)

JTA — The High Holidays are approaching. It is a time when Jews worldwide join together in the spirit of camaraderie, pouring out their hearts for a good new year.

But the lead-up this year has been different, often pitting Jews against Jews in bitter controversy. Rosh Hashanah 5779 arrives with the passage of legislation declaring that Israel is a Jewish state with the right of Jewish self-determination. Supporters and detractors have been characterizing each other using inappropriate, explosive language. On one side, too many have called the law’s supporters “racist”; on the other, too many have called its detractors “anti-Zionist.”

Such language must stop. It fans the flames of conflict, potentially leading to hatred – even violence. While a word is a word and a deed is a deed, words lead to deeds. As the rabbis declare, wise people must be careful with language.

Rather than call the other names, each side should listen to the other’s concerns, allowing them to influence their own thoughts. Listening is at the core of Rosh Hashanah’s shofar ritual. The ritual is not only about sounding the shofar, but, as its preamble blessing proclaims, listening (“lishmoah”) to its sound.

Supporters ought listen to issues raised by detractors. Specifically, with the one-state solution gaining traction among Israel’s Jews, will Arab citizens be denied an equal vote? And, it must be added, does a Jewish state mean a theocratic state where Jewish religious law will be imposed against the will of many?

Recent events have increased these fears. A Conservative rabbi was picked up by police for performing a marriage outside of the jurisdiction of the Chief Rabbinate, which follows rigid Orthodox practices. I, too, an Orthodox rabbi, have felt the sting of the Chief Rabbinate. Letters I’ve written attesting to the Jewishness of longtime congregants of my synagogue in New York, where I have served for 45 years, have been denied.

Detractors, too, must take into account questions raised by the law’s supporters.

Too many Israeli Supreme Court decisions have alienated too many Jews living in Israel. While all communities ideally should be open to everyone, the Israeli Supreme Court has allowed Arab communities to exclude Jews while forcing Jewish communities to include Arabs. Additionally, because of the importance of free speech, some rhetoric by Arab members of the Israeli parliament that has bordered on treasonous has been permitted on the Knesset floor. This has outraged some Israeli Jews.

I have long felt that the founders of the state should have been more decisive and named the country the Jewish State of Israel in 1948, proclaiming its Jewish identity from the outset. Among other matters, this would have clearly declared “Hatikvah” as Israel’s national anthem, Hebrew as its official language, the Israeli flag as its national banner and the Law of Return as applying exclusively to Jews.

I support the nation-state law, even as I insist that all citizens of Israel be treated equally. I believe strongly in reaching out to our Arab brothers and sisters, and so I visited the mosque in Yasuf that was desecrated in 2009 and reached out to the father of Mohammed Abu Khdeir, the Palestinian teenager who was murdered in 2014 after three Jewish boys were kidnapped and murdered. I have reached out because of my passionate belief that all of humanity regardless of religion or race is sacred and every human is created in the image of God.

For me, a strong sense of Jewish identity does not contradict universal consciousness but is a prerequisite to it.

I have little doubt that the architects of this new law believe that it does not discriminate against Arabs. They would insist that equality for all is legislated in other Basic Laws that would fully protect Arabs and other non-Jews living in Israel.

But with nationalism on the rise both in the U.S. and around the globe, the timing of this new law is suspect. And it very well may be that politicians are using the law to gain political points.

Because of these concerns, I, a strong supporter of Jewish settlements, believe that the new law should be amended to include a simple but important phrase from Israel’s Declaration of Independence: “[Israel] will ensure complete equality of social and political rights to all its inhabitants irrespective of religion, race or sex.” I suggest this addition because these rights are absolutely central Jewish values. Such an amendment would win over support of many of the law’s original naysayers.

There are many democracies in the world. No two are the same. Israel is not simply a Western democracy that happens to be in the Middle East. It is a unique Jewish democracy — with all its beauty and complexity.

And no democracy faces the existential challenges that Israel does. Despite threats on each of its borders, and even from within, Israel tries to do all it can to adhere to democratic principles. It’s difficult to imagine that other nations facing similar threats would do the same.

This Rosh Hashanah, supporters and detractors should remember that there is a short but clear pause between the sounds of the shofar. The pause may be understood as giving participants time to listen and incorporate each individual note’s meaning into our hearts and souls.

This, I believe, is our mandate, our “tzav hasha’ah.” Rather than the two sides in this debate demonizing the other, each must listen to the other. Each much see the other as an ally in the common goal of strengthening Israel as it was originally created to be: a Jewish state with inextricably built-in democratic values of individual equality for all of its citizens.