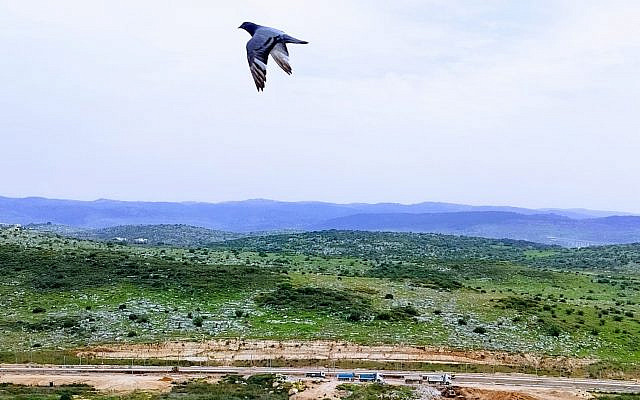 Hills outside of Modi'in (photo by Mark Nadel )

Halfway through my daily walk, I pass a memorial to those from our city who gave their life for our Land. It is on the edge of a path which hugs a valley where our ancestors once lived. If you look up, you see the cranes that define the skyline of my young city. I often stop at the memorial to look at the names listed. I stop there to remind myself that this home that I live in does not come to us simply and to say a silent thank you. Today, I chose to walk in a different direction, but something compelled me to go back to my usual route.

As I looked at the memorial, I saw a woman walking through it. She was dressed in workout clothes and walking purposely. My initial thought was that her pace didn’t mesh with the sanctity of this place. Then I saw her bend down and reach for some stones. Gently, she laid one down by every single memorial. She wasn’t crying but, on her face, she wore her sadness. As she passed by me, I gave her a hug. I wanted to ask her who it was that she loved and whose memory lived here. But, it was not a moment for words. Instead, I retraced her steps and imagined which name had drawn her to this place.  As I stood there, I reflected on how our city, that was so young had produced so many names.

My city is a city of the future. Not only because it was built with vision and the most detailed of planning but because, in my opinion, it is a city that embraces its children. Every few steps there is another park, another sports field or a youth center. It is also a city that sends its future in great numbers to serve. If you want to feel a surge of national pride, stop by the Central Bus Station on a Sunday morning and see the giant tour buses waiting to collect our sons and daughters dressed in green and khaki. They are laughing and joking and carrying the heaviest of loads. Our chayalim climb on the bus with freshly washed uniforms and, in their hand, a fresh danish from a box of pastries left each week by a woman, who I am sure has her own story.

In my house, my chayal, my youngest son, steps out of the apartment with his right foot forward and kisses the mezuzah three times. Inevitably, he has with him a box of homemade cookies to be distributed to his fellow chayalim in the middle of a 30-kilometer hike. Then my husband and I drive him to the bus station and send him off with a hug, a “we’re proud of you” and then we let him go.

Our chayal is completing his army service this week, which is why I am thinking about the army a lot. My thoughts were also triggered by the picture that went viral of a father and son wrapping their tefillin and discussing how they had just enlisted together to fight for Ukraine.

Our chayal enlisted two years ago in August as a lone soldier. We were not there at his enlistment and did not see him for a year. Eventually we made it here, to this young city, and I was able to be that mom who was there with the chicken soup when he came home and the egg sandwich when he left. I am sure that there was no uniform that smelled better than his, at least before he began his weekly training.

Every single day that he has been in service, I have recited the words of the same psalm — 121-– Esah Einai El He’Harim. I vowed to say it religiously until he completed his army duty.

According to Amos Hakham, its words evoke the wishes of a father accompanying his son who is about to embark on a journey.  I chose the psalm for its substance but also for its scenery. Its setting, described in its first words, reminds me of the cascade of mountains which fill our horizon and greet us when we enter our home. I envision the father with his hand on his son’s shoulder looking towards these very mountains and saying these words of reassurance and prayer.

I turn my eyes to the mountains; from where will my help come?

[Your] help comes from G-d; maker of heaven and earth.

He will not let your foot give way; your guardian will not slumber…

G-d is your protection at your right hand.

By day the sun will not strike you; nor the moon by night.

There is one more line in the psalm. In my mind, it is said by the father to the son after the two have embraced and parted. As his son begins to fade from his vision, the father shouts out the final line of the psalm, a final wish of protection.

[May] G-d  guard your goings and your comings, now and forever.

Over the last two years, these words have become the daily prayers of a mother. In saying these words, I imagined that I was wrapping a protective shield around my son. In recent days, I wondered whether I would continue to say this psalm even after my son has finished his service. But after this morning’s encounter, I know I will.

And to the woman who I hugged today, I want you to know that I will continue to stop by the memorial and read the names that are there. I will think of you, I will think of our embrace and I will wish that whoever you were visiting today — Yehi Zichrono Baruch –– his memory should be a blessing- for you, for all of us and for all the children of his city.