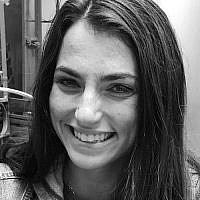 The Blogs
Barbara Schiffer
Apply for a Blog
Advertisement
Please note that the posts on The Blogs are contributed by third parties. The opinions, facts and any media content in them are presented solely by the authors, and neither The Times of Israel nor its partners assume any responsibility for them. Please contact us in case of abuse. In case of abuse,
Report this post.

I grew up in a Conservative synagogue in Maryland. I went to preschool there. I had bat mitzvah lessons there. I went to Hebrew school every Sunday there. I was even the USY chapter president and synagogue intern there during high school.

I never once walked in to the synagogue and felt anxious or worried about it. In fact, I often felt slightly annoyed that I had to be buzzed in during the week. Who would be trying to get in that they needed to be so careful? It didn’t occur to me that the police officer, who sat in his car outside, was there for any reason other than it being a large gathering place.

I’ve worn my Star of David necklace all around the world. From America to Israel to France to Vietnam to Egypt. I’ve never felt like it posed a threat. Like I should take it off or hide it from everyone. It’s just a part of who I am.

When I moved to Israel, almost four years ago, that feeling stayed with me. I feel safe and secure in my Jewish identity. I don’t worry that someone will hurt me because of my heritage. Because of the way I choose to worship. Because of what symbol is printed on my groceries.

But last night, in a synagogue in Chicago, I felt something different. I felt like being in that space was dangerous. That it was as if I had hung a target on my back. Just asking for someone to walk in and hate us because of the star I wear around my neck.

I became acutely aware of why those police officers are stationed there. Why synagogues have buzzer systems. Why my mom reminds me that sometimes, it’s okay to hide my necklace.

I felt it. The otherness.

I never thought, that would be something I would understand as a Jew in America. But here we are.

But I’m not taking my necklace off. And neither should you.