As a regular traveller to London, I thought it would be interesting to post about the upcoming Election from a Jewish perspective. While Brexit is the main issue, the blatant anti-Semitism by the Labour party and its leader is a major concern for the Jewish Community. The Chief Rabbi Efraim Marvis came out with a public statement, the issue was front-page headlines in all the papers for a few days and labour leader was forced to respond a so-called “apology for his anti-Semitism”.

There was a public rally by thousands of people braved the cold weather last Sunday to join a rally against antisemitism. The Protesters held placards marked “Together against antisemitism” and some bearing slogans such as “Antisemitism = Racism / Mr Corbyn – J’accuse” and “racist Corbyn unfit to be PM” during the rally in Parliament Square led by Campaign Against Antisemitism. 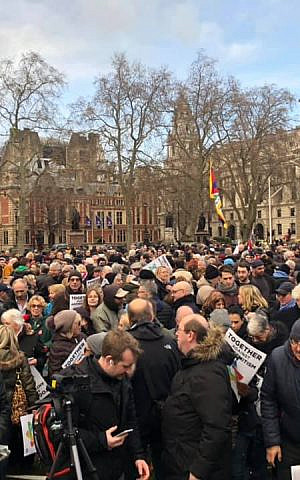 It is quite sad and sick to see the use of Free Palestine used a slogan to gain creditability for left-wing credentials. A pamphlet was dropped into the post box in my office and listed Free Palestine as one of the candidate’s demands. Not sure what this issue has to do with British National politics. In fact, the Labour and the Liberal Democrats Election Manifesto both state that would recognize a Palestine State, while the Conservatives Manifesto only deals with UK National Interests. Labour would ban Arm Sales to Israel.

In order to assess the seriousness of this, I interviewed leading Political Consultant, Jodie Cohen, whose interview with ILTV on the UK Elections is featured in this blog.

Q: Is the fear if anti-Semitism a real threat in the UK to the Jews?

A: “We know that over 40% of British Jews are considering emigrating – this suggests that the Jewish community perceives the threat to be very real.”

[From the author – I include in Footnote B – a Message that somebody posted on Facebook which underscores this fear.]

Q: Was it correct for the Chief Rabbi to make a public statement?

A: “The fact that the Chief Rabbi, who is normally apolitical, decided to issue a public statement and get involved during an Election campaign, underlines the seriousness of the situation.”

[From the author – This Public Statement was supported by leaders of the Church which I attach for further reading  in Footnote A – a Message from the Bishop of Norwich to Norwich Hebrew Congregation.]

An additional consideration that we need to consider is how one should combat the growing anti-Semitism in the UK, Europe and the USA.

There seems to be two schools of thought – Outreach (Dialogue) or Hasbara (Information)?

Reaching out to these through by dialogue, reaching out, interfaith initiatives and Outreach. This contrasts or can be used in tandem with the main approach we have now is Hasbara, Providing the Truth, combatting the lies. Let’s try to get the truth out, the facts out to combat the lies, falsehood.

While, I would expect the answer of Love, reaching out to be from the followers of Rabbi Shlomo Carlebach who reached out in concerts in Germany and Poland in the aftermath of Holocaust in the sixties and beyond, this approach today does not seem to be working.

The question to consider if outreach in this polarized world where just the mention of Trump, Israel creates vicious irrational emotions can be effective?

The idea of outreach shows great sensitivity to other people’s views even if they are misguided. Just like when we want to guide, influence our family members, people to see share our views, we cannot just bombard them with the facts but need to reach out through the use of what is called Emotional Intelligence.

While none of us have the answers, I think we should all ask ourselves…

Do you think outreach will be effective with?

In conclusion, this election, as well as the upcoming US Elections, raises alarm bells for the Jews. There is no doubt that the irrational focus on Free Palestine and Anti-Israel is the new and not so new flavour of Anti-Semitism. Anti-Semitism has reared its head in many of the so-called Christian Countries around the world, and it is time for these Jews to listen to the messages and come home to Israel.

“As a fellow child of Abraham, I wanted to write this morning to express my solidarity with the Jewish people having read the Chief Rabbi’s statement.

I have just returned from saying morning prayer in Norwich Cathedral, after which I spent some time in the chapel of William of Norwich praying for you and your community. As you will know, William’s murder was falsely blamed on the Jewish people of Norwich and is the first recorded example of the ‘blood libel’. I hang my own head in shame for Christianity’s history of antisemitism.

The Archbishop of Canterbury messaged me late last night to give me notice of his own statement:

“That the Chief Rabbi should be compelled to make such an unprecedented statement at this time ought to alert us to the deep sense of insecurity and fear felt by many British Jews. Everyone in our country is entitled to feel safe and secure. They should be able to live in accordance with their beliefs and freely express their culture and faith. As a Church, we are very conscious of our own history of antisemitism. None of us can afford to be complacent. Voicing words that commit to a stand against antisemitism requires a corresponding effort in visible action. I would reiterate that ‘no individual or community in our shared society should have reason to lack confidence in their belonging or security, so parties must make it an absolute priority to offer positive reassurance and avoid anything that increases the perception of fear.’ The Chief Rabbi’s statement provides all of us with the opportunity to ensure our words and actions properly reflect our commitments to mutual flourishing and inclusion, for the common good.”

I agree with every word that he says and pledge to do whatever I can to support my Jewish sisters and brothers who live in my diocese and elsewhere.

Please would you be so kind as to pass on my concern and the assurance of my prayers to your community?

Footnote B – a Message on Face Book

Since the day the election was called, I have woken up every morning with a knotted stomach. The very thought that the people of the country that has been my home and my parents’ home for all our lives could elect the most dangerous man to British Jewry since WW2.

My dream is that Labour is totally crushed…a massive landslide. I am no fan of Boris…in any other time against any other Labour leader I would be voting red. But I cannot. And in all good conscience neither could anyone else. But perhaps good conscience has left the building.