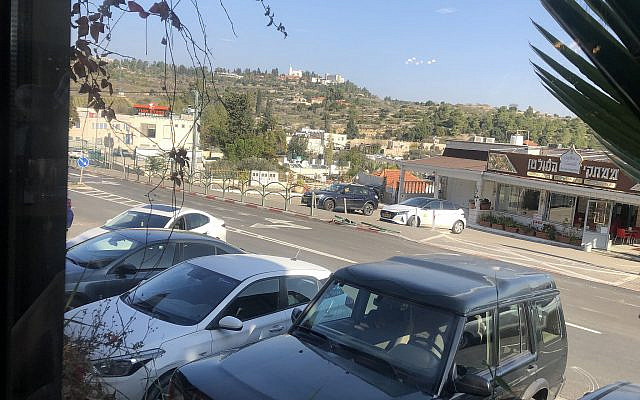 Winter has been reluctant to arrive here in Israel, and as I write this in mid-December we can enjoy the balmy sunshine (and not having to heat our homes), though our fields and gardens yearn for rain. However, the silver lining to the lack of clouds is that every day is a nice day for going out into the countryside and enjoying the benefits of nature. And after a little exertion in the open air there is nothing better than a slap-up meal in one of the restaurants in nearby Abu Ghosh, where shops and restaurants are open on Shabbat. Our favourite is the Caravan, partly because the food is good, it has a lovely view over the Jerusalem hills and also because, in contravention to the Moslem ban on alcohol observed by the other Arab restaurants, it serves wine (and no good meal should be without wine).

Our suburb of Mevasseret Zion sits on a hill overlooking the road to Jerusalem. Occupying the next hill along is the Arab village of Abu Ghosh. At the time of Israel’s War of Independence in 1948, when Jerusalem was under siege and the convoys bringing supplies to the embattled city were attacked by the residents of the Arab villages along the road, the villagers of Abu Ghosh did not join in these attacks, preferring to remain neutral or even aid the Zionists. In the years following Israel’s independence the main road from Jerusalem down to the coastal plain went through Abu Ghosh, where some enterprising residents opened a restaurant and café called ‘The Caravan.’ Travellers, including military personnel, often stopped and refreshed themselves before continuing on their way, as in the early years of Israel’s existence the roads were poor, narrow and badly maintained. In those days each trip out of the capital was not as easy as it is today.

Now the highway from Jerusalem down to the plain is wide and well-kept, and the former main road now winds through Abu Ghosh, passing shops and garages as well as restaurants. In the seventy-odd years since Israel’s independence the village has flourished and expanded, its residents have built themselves fine houses, their economy has prospered and the ancient church in the village has hosted music festivals (currently in abeyance as repairs are being made to the roof).

Mevasseret Zion’s local council cooperates with that of Abu Ghosh in matters concerning security and regional administration, so that it came as a shock when the national news broadcast reported that cars in Abu Ghosh had been burned and slogans denigrating Arabs daubed on walls there. Together with other local authorities, the Mevasseret council was quick to condemn that action, publishing a full-page notice to that effect in the local paper. Meetings between the two local councils were held, and quick and competent police work led to the speedy arrest of the perpetrators.

One of the by-products of that shocking event was a call by private residents of Mevasseret to show their support for the village of Abu Ghosh by frequenting its shops and residents, We were happy to comply with that request, and when we got to the restaurant we found ourselves facing a printed notice inside the entrance stating (in Hebrew) ‘Because we are all Brothers.’

That notice was issued by the Reform movement in Israel, and I wonder how long that organization will be allowed to continue to function in Israel once the new government is installed. But the message of the notice is clear, and one can only hope that the spirit of brotherly love, tolerance and acceptance of the other will be allowed to persist in these troubled times.