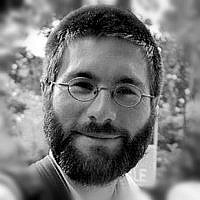 The Blogs
Natan Levy
Apply for a Blog
Please note that the posts on The Blogs are contributed by third parties. The opinions, facts and any media content in them are presented solely by the authors, and neither The Times of Israel nor its partners assume any responsibility for them. Please contact us in case of abuse. In case of abuse,
Report this post.

The world got kinder just last month and you may have missed it in the usual fray.  A few  weeks back, the United Reform Church tabled one of those anti-Israel motions that anyone seriously involved in constructive Jewish-Christian relations has come to dread.  It was a perfect storm of bad theology and holier-than-thou politics urging the URC to  adopt the credo of the infamous “Inheritance of Abraham” report, containing lines such as: “The  promise to Abraham about land is fulfilled through the impact of Jesus, not by restoration of land to the Jewish people.” Ouch!  It called on  URC members  to   boycott   Israeli goods and people, which would, of course, give the Jewish state the dubious distinction of becoming  the singular nation under boycott by  that Church body.

I admit it, when I read the motion, I nearly cried.  For we have been here before haven’t with?  With the Methodists in 2010, The Iona Community in 2012,  The Church of Scotland in 2013, the Union of Welsh Independent Churches in 2015–and that’s only the Christian groups here in the UK, no need to mention America, or worse, Europe–and the outcome at each Church gathering   was  invariably the same.  The motion would pass, the Church would subsequently issue  a carefully worded statement pointing out that this boycott was  only about Israel and praying fervently  that the Anglo-Jewish community  could just  turn the other check and keep up the good interfaith relations despite a little pesky boycott of that Jewish State.

But that’s not what happened.  The URC voted down the worst elements of that  motion.  The URC decided that a complex, deeply contentious, and long entrenched issue like Israel and Palestine couldn’t be solved with an hour of hand-wringing on the assembly floor.  The URC called simply for peace, justice and renewed dialogue on all sides, and than backed up their words with a charge to their Mission Committee  to create  genuine  projects of engagement, both here and in the Holy Land, to resource good words with good actions.

And of course, there was no story. The Board of Deputies issued  no strongly worded statement, the Jewish press  didn’t decry the rising tide of anti-Semitism, the pro-Israel groups sent  out  no letters to any editor.    But, we miss the still small voices of change at our peril.  Because a few key elements clicked into place to turn that URC debate on the Holy Land into something rather sane, and its worth exploring precisely what came together so finely.

It probably was not the high level meetings between the leadership on both sides.  Before each subsequent Church vote on Israel, the Board of Deputies would demand a meeting with that  Church’s power brokers.  The Board representatives would  invariably shout, the Christians would  invariably listen with listening faces, and the motions would pass just the same.  And it was probably not the venerable interfaith establishments that envision themselves as honest brokers in these situations.  These interfaith groups  do have their place (I even work for one of them!).  But these boycott motion are fomented in the deep down  grassroots, while the  interfaith organisations are busy with the gatekeepers .

So, what happened to shift the URC debate in such a positive direction?  Simple, a few rabbis found out about the motion and called up their local URC ministers for a chat.  “I just spoke with the reverend about my family in Israel,” one rabbi recalled of such a meeting, “I mentioned that a boycott against everything Israeli, felt like a boycott against some core part of myself and my community here in the UK, as well.”  It wasn’t loud, it wasn’t aggressive, just a few rabbis willing to share an open dialogue with  Church leaders who were willing to listen. And it seemed to work.

Every so often, someone will ask me what’s the  purpose of  all this interfaith work.  “I’m aiming to make my job obsolete,” I tell them.  That real, emotive, honest interfaith work about the issues that matter most to the Jewish community will become a  normative component of every rabbi’s job portfolio.  So  that walking across the road to speak to the local minister about Israel becomes  the given, rather than the aberration reserved for a threatening motion. And so to, that every Jewish primary school pupil  will  visit a mosque at least once before  their bar and bat mitzvah, and every shul in the UK hosts  one non-Jewish clergy on its  pulpit, at least once a  year.  Who knows, with less interfaith experts, and more interfaith Jews,  the world might just keep getting a bit kinder month by month.