As a young Israeli-American Jew, I was extremely shocked this morning when I heard about your decision to disband all meaning and relation of the Temple Mount to the Jewish faith. The decision to erase the names Temple Mount or in Hebrew “Ar-HaBait,” is despicable and disgraceful to your organization. By making such a statement, you publicize your incompetency to understand the foundation of Judaism and furthermore add more de-legitimization to your establishment. I would love to take a minute of your time and educate you on the foundation of Judaism.

In Genesis (the first book of the Old Testament), chapter 22 we find the following direct quote:

Then God said, “Take your son, your only son, whom you love—Isaac—and go to the region of Moriah. Sacrifice him there as a burnt offering on a mountain I will show you.”

Temple Mount, located on Mount Moriah, serves as the exact location where Abraham is commanded to carry out the sacrifice of his eldest son. It is not the commandment to go there that creates the meaning for Moriah; but rather what happens next in the story. As the narrative develops, Abraham raises his sword to carry out G-d’s commandment but he is stopped by an angel’s voice demanding that he lower his sword and not to harm Isaac. It is here exactly where the unbreakable bond is forged between Abraham the Patriarch and G-d.

In the latter books of the Tanach, we find other crucial moments in Jewish history where Temple Mount cannot be ignored as a religious landmark: The reign of King David, of King Solomon, the construction of the first Temple, and the second. Our people’s future is even described to be centered around the construction of a third and final temple on Mount Moriah. How can you deny the Jewish claim to this sacred monument? Its meaning is described and emphasized in every single piece of Jewish scripture!

The claim you make is based either out of ignorance and lack of education or simple anti-Semitism. So, I request you choose one of the two options, and then defend your claim to the international community, and to Israel. I choose to remind you; only under the Jewish State’s sovereignty, have people of all religion, been granted the rights to pray with all the freedoms that accompany. The only thing your claim will produce is further resentment and instability in the region. Such prerogatives do not contribute to education, peace, or culture. Either reconsider the mission statement of your organization or eliminate the preposterous and unproductive claim to erase Jewish history from the Temple Mount.

I invite you to reconsider. 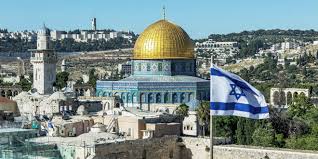 Temple Mount: The Holiest Site in Judaism
About the Author
Jonathan Michanie was born in 1993 Buenos Aires, Argentina. He lived in Miami, Florida where her completed his undergraduate degree from Florida International University in Political Science, with a focus in Middle Eastern Affairs. Former combat paratrooper in the IDF and holds an MA in Diplomacy and International Security from IDC Hertzeliya.
Related Topics
Related Posts
Comments