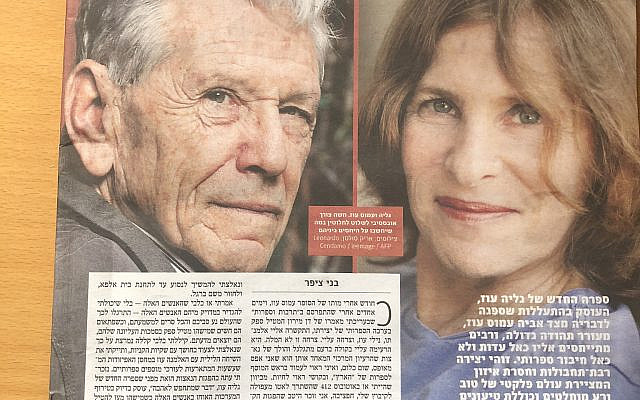 The latest scandal to erupt in Israel’s literary arena has been triggered by the book published by Galia Oz, the daughter of the late, greatly-esteemed writer, Amos Oz. The memoir, entitled ‘Something Disguised as Love,’ burst upon the Israeli reading public in a blaze of publicity arising from its controversial revelations concerning the behavior of Amos Oz towards his daughter.

Galia Oz claims that in her childhood her father acted consistently and relentlessly in a violent and aggressive manner towards her, beating, kicking and abusing her verbally. She also claims that the entire Oz family ostracized and demonized her.

Literary circles in Israel have been having a field day, chewing over the contents of the book, analyzing the author and the veracity of her claims. Thus, Benny Tzipper, the literary editor of Haaretz, uses the opportunity to denigrate both father and daughter for what he considers to be their inferior literary ability and ‘narcissism.’

Amos Oz has been universally acclaimed, both in Israel and abroad, as a leading literary talent, and I personally have greatly admired his use of language and ability to recreate time, place and character in those of his books I have read. Benny Tzipper has proved himself to be a capable literary editor, though in other aspects (his adulation for Sarah and Benjamin Netanyahu, and the fact that he is something of a dandy in his attire) I am deeply suspicious of his judgment.

He uses the opportunity presented by being able to review Galia Oz’s book to represent himself as a long-suffering victim of verbal abuse hurled at him on the phone by Amos Oz’s widow, claiming that her furious tirade caused him to forget to get off the bus when it reached ‘his’ kibbutz. The unsuspecting reader would assume that the writer is a member of a kibbutz somewhere in the north of Israel, but a quick glance at Google reveals that he merely lives in a suburban extension of a kibbutz, and hence has no affiliation with the socialist values of that institution.

For Benny Tzipper to accuse Amos Oz of being narcissistic is a classic case of the pot calling the kettle black. One might even argue that anyone who writes and publishes a book or an article is, by definition, narcissistic themselves.

But the plot thickens. The following weekend edition of the paper (today) contained a heartfelt article in the op-ed section (for obvious reasons, I’m guessing, not the literary section) by Mark Glazerman, who claims to have been a long-standing friend, as well as the physician, of Amos Oz, stating that he knows how saddened his friend was by the rift with his daughter which, according to Glazerman, was Galia’s doing.

By chance, I happen to have reliable inside information about the rift within the family, which bears out Glazerman’s claim.

The sparks are still flying, and the book is still selling, which may have been the object of the exercise. The furor has given Benny Tzipper a chance to cast aspersions on one of Israel’s leading literary lights while at the same time (mis)representing himself as a noble warrior in Israel’s struggle for social justice.