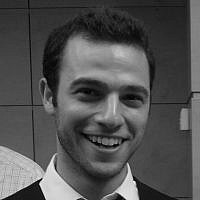 Tonight I lost a very close relative, one that I never even knew.

As we all very well know, wherever there’s a war, there are going to be funerals. Tonight (last night at this point) I attended the funeral of Sean Carmeli HY”D, the lone soldier from Texas who was killed in action in Gaza.

This one was different for me. This one hit home.

At a meeting yesterday, one of my superiors said something along the lines of “Ya, war is hard to deal with, but I’m old when it comes to wars; I’ve lived here for a whole bunch of ’em.” Nobody normal gets used to wars, and that includes my superior, he just functions a little better than most of the others in the office during these hard times.

While attending the funeral tonight I thought of the articles and posts I read about Sean and his family and the fear that there would be very few people to show him the honor and respect he deserves.That was the last thing going through anybody’s mind when, after 15 minutes of delay due to the over-congestion of the main pathway in the cemetery as a result of the estimated 10,000-20,000 people that showed up, military and police personnel had to physically clear a path for the funeral procession to be able to advance. A local soccer team in Haifa, knowing that Sean was a fan, went so far as to urge everyone in the country who could to make it to the funeral tonight to show the Carmeli family what the family of Israel means. And that they did.

People came from all over the country and all over the spectrum – Golan, Merkaz, Secular, Religious. Tonight there was no right and left, only Sean.

Most poignant was a big sign written in English which read “The Nation of Israel Embraces Sean’s Family”. However, I want to say that there was one large mistake made, which was inadvertently corrected later on during the eulogy of the Mayor of the city of Ra’anana. He said that tonight, and from here on out, we are all one family. The nation of Israel has officially adopted the Carmeli family, and all of the pain that comes along with that. Our hearts cry together. There is no such thing as a lone soldier in Israel.

That is what really hit me. This brave young man who decided to stay in Israel and even gave his life for the protection of his homeland and nation was someone with whom I had an innate connection. He stayed in Israel when his family moved back to the United States and voluntarily enlisted in the army as a lone soldier. He would have to do his own laundry, buy his own milk and cook his own meals. But, it was all worth it to Sean. He believed in the ideology of love and protection of the most important things in life and the notion of being willing to give everything you have to ensure them.

Tonight I remembered yet again how lucky I am to have my family, and my other family. I am blessed to have an adoptive family here in Israel who has given me so much and never taken anything in return. I am blessed to be a part of the bigger family of the Nation of Israel. But, I never ever think for a second that these can replace my parents, siblings, nieces, nephew, grandparents, cousins and other relatives who have supported me throughout. One never has to contradict the other.

In the Jewish world, we have constant reminders that there is no such thing as being alone. If, by some crazy definition, the word “lone” means to have 10,000 – 20,000 people who would come out after 11 pm to pay their respects, then I am beyond happy and privileged to be one of the many lone soldiers to have served my country.

About the Author
Chaim Seligman is a Law student at Bar-Ilan University, President of the BIU Model UN Society and works in the University’s External Relations Department; Originally from Florida, Chaim now lives in the Merkaz and enjoys life as a student in the Jewish Homeland; Chaim’s true passions are Israel and the Jewish Nation’s eternal success.
Related Topics
Related Posts
Comments