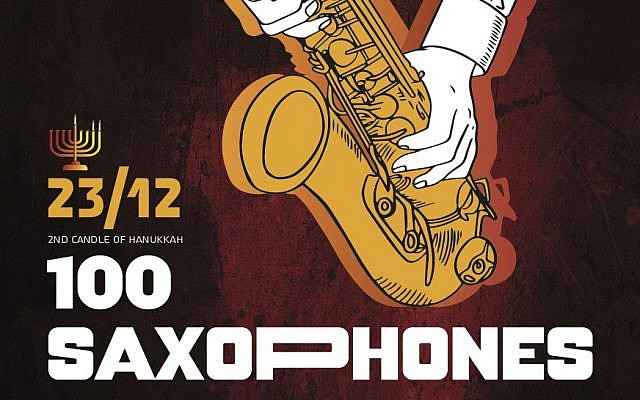 It is rare that I mention my own composing in this blog.  And yet, given the ramifications of next week’s special event at YMCA, I will make an exception. 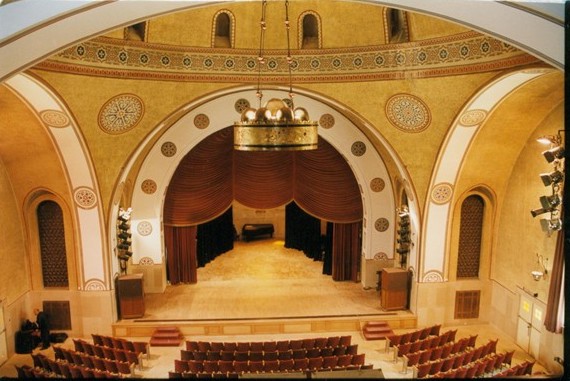 “100 Saxophones” (and yes there ARE a hundred) will be performing a work by the same title.  It is now Friday morning before this Monday afternoon’s premiere (23.12/16:00). I look at the list of saxophone players, from ages 10 to 85; I look at their broad range of ethnic origins, socio-economic status, and ranges of ability.  This “holistic ensemble” is somewhat a miracle in this day and age.  In addition the music defies category.  It’s inspiration is the imagined sound of the “magrepha” (a legendary instrument from the Second Temple period). Talmudic scholars have argued what this instrument was, its touch, taste and feel. Some point to a shovel dragging on the temple floor.  Most, though, speculate that it was a large organ-like instrument with many tall holed-pipes, played with air pumped through huge bellows, probably operated by three or four assistants.  There were arguments as to how many sounds the instrument produced.  Some scholars said a thousand.  Others, the majority, said “one hundred” (hence this piece’s title).  There is one point, however, that most Talmudic scholars agreed on: that one could hear the magrepha’s sound all the way to Jericho.  It was strong, bold and energetic. 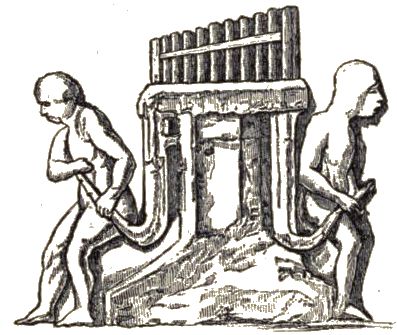 The “magrepha”: one imaginary view (courtesy)

Hence, my dream to assemble 100 saxophone players together, inspired by the magrepha, is now becoming a reality.  In some worlds that would brand me a Third Temple nutcase.  I assure you: I am not.  I am a composer seeking inspiration from textural sources, to set my imagination on fire.  I did this in 1985 as the first composer to have a full evening in the Israel Festival, through my piece entitled Agadot (based on Biblical texts).  I envision a sequel down the line, examining Talmudic texts for inspiration. 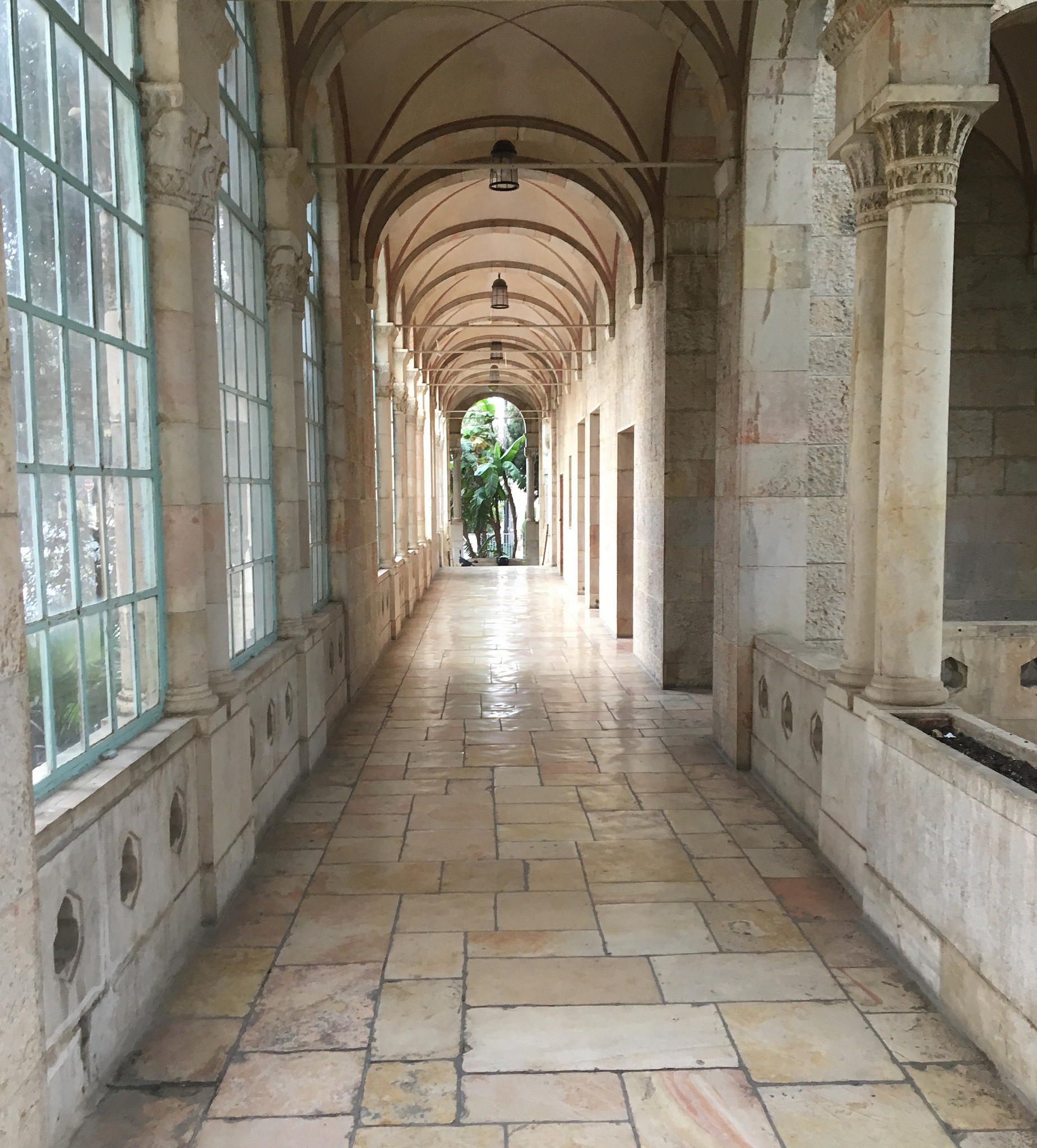 But the “dream” goes much further.  At present I feel like Richard Dreyfuss in the movie Mr. Holland’s Opus because the saxophone “choir” of 100 will include many of my former students who I have not seen in over 30 years!  Furthermore, it is a gathering of professionals, semi-professionals, and gifted amateurs (various doctors, lawyers, students of all ages and saxophone aficionados). It is the first time this group has been assembled (thanks to the generosity of the Jerusalem Municipality Department of Culture and Arts, Music Department).  Most players will receive a subscription to a Jerusalem cultural organization’s season.  But what is moving, even to the greatest skeptic, is the goal to assemble a group of such diversity, have a day of rehearsals, and then mount a worthy performance (spoiler alert: complete with an “Ivesian” parade).

Music is truly the leveler, as is unfortunately illness (one can observe patients of all walks of life, all incomes, and all with different origins embracing, talking, sympathizing and loving each other at Hadassah Medical Center, or any other major Israeli hospital).  Unfortunately natural disasters often do the same.  And yet “100 Saxophones” is quite different. It is a meeting of musicians who seek fraternity, brotherhood and sisterhood, sharing their love for the saxophone and  what will hopefully be an uplifting experience.  Hopefully the sum of the parts will be elating, one where the collective “one” will merge with individual uniqueness.

I invite you all to widen the “circle”, as there are nearly 500 seats in the YMCA Concert Hall, a magnificent structure, ornamented with palimpsests and designs from the far to near “past”, exuding a timeless beauty and elegance.  There is no building in Jerusalem (or perhaps the world) which is similar.  It is one of a kind, perfect for a celebration and miracles, the first day of the lighting of the lights, adjacent to Christmas, and  embraced by all three major religions and diverse cultures world wide.

Yes, I invite you all to experience something unusual.  I hope that the music will be exuberant and moving.  Afternoon concerts, like morning matinees, have a strange capacity to do such that!  And as a bonus, entry is “gratis”, our “treat”, complete with “sufganiot”, coffee, tea and good “vibes” (no pun intended!)

“100 Saxophones”.  Here’s a sample, the imagined sound that shattered the walls of Jericho!: “Breaking the Walls” 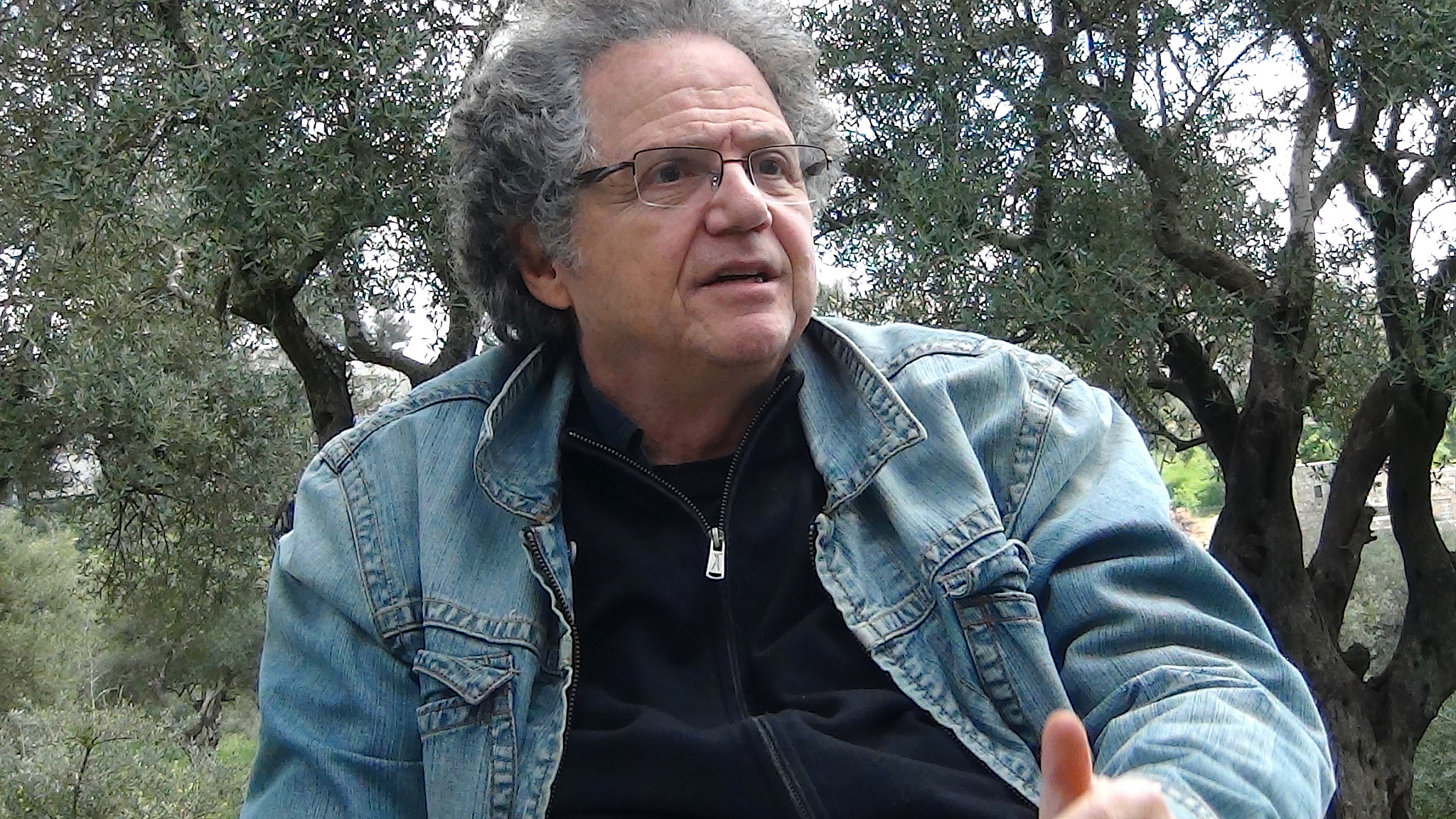 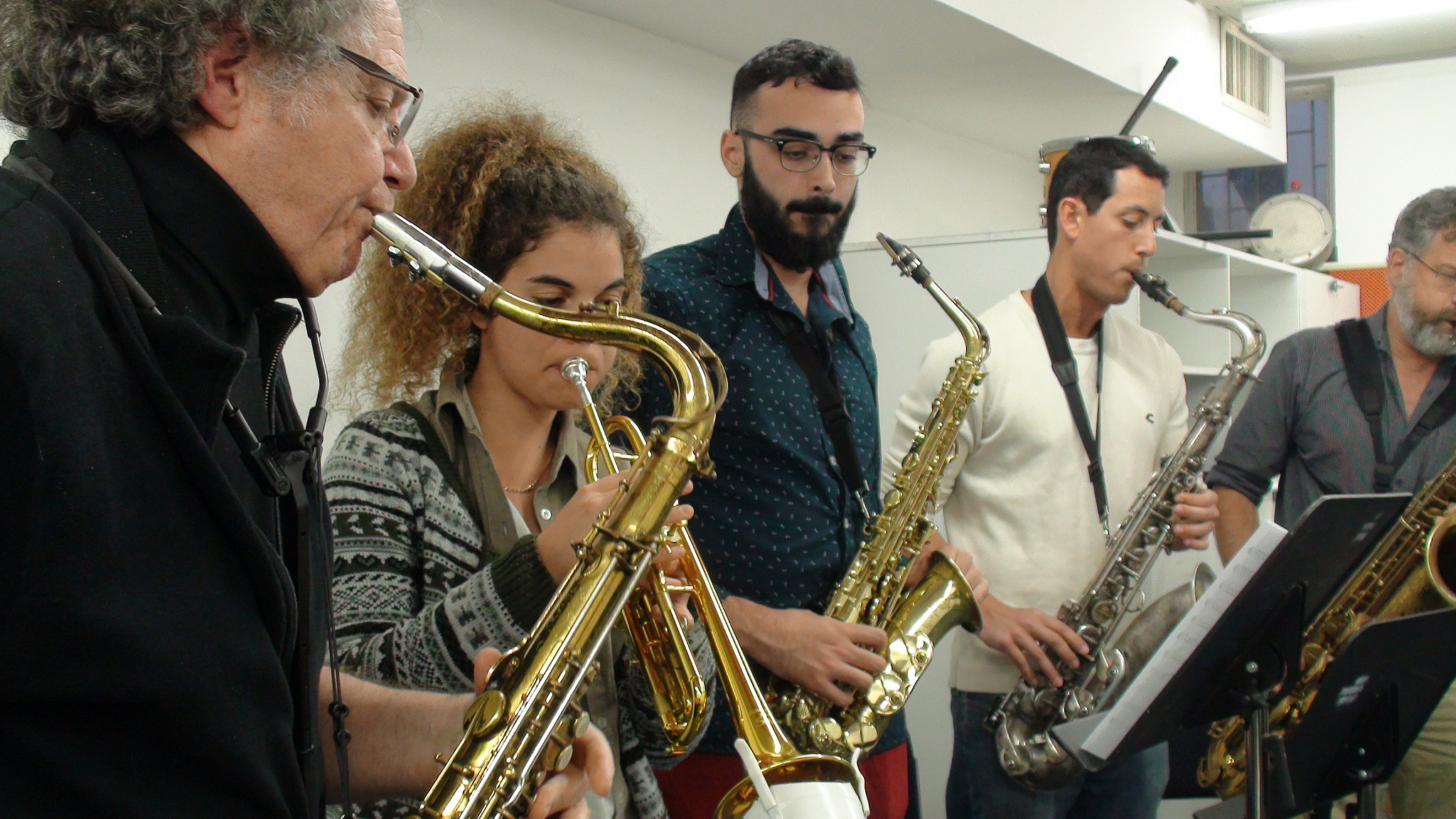 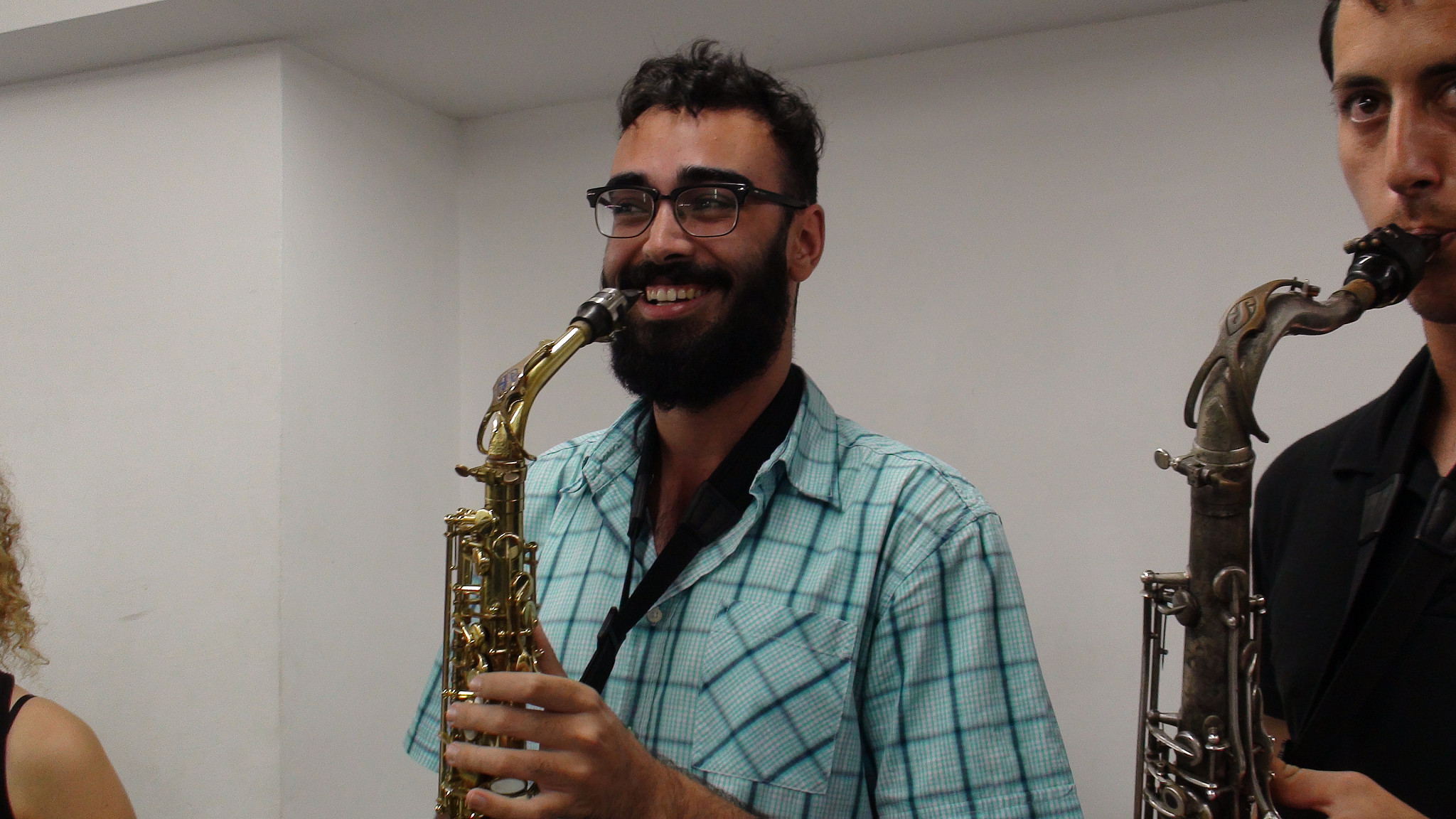 Saxophonists Mattan Yerushalmi and Chen Amar, two of the hundred participants (courtesy)
About the Author
Stephen Horenstein is a composer, researcher and educator. His repertoire of musical works has been performed and recorded worldwide. He has been a recipient of the Israel Prime Minister's Prize for Composers and the National Endowment of the Arts (USA). His teaching has included Bennington College, Brandeis University, Tel Aviv University, Jerusalem Academy of Music and Dance; residencies at Stanford University, York University, California Institute of the Arts, and others. He is Founder and Director of the Jerusalem Institute of Contemporary Music, established in 1988 to bring the music of our time to a wider audience.
Related Topics
Related Posts
Comments