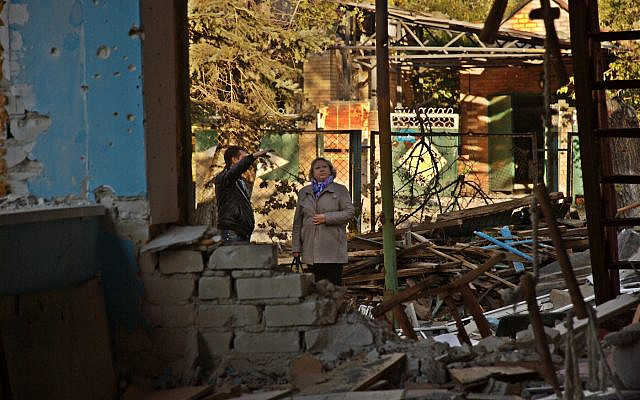 Looking through the rubble caused by the conflict in Ukraine

For many people in Britain, Ukraine is just another far off country in middle Europe that is none of our business, whatever the empire rebuilding ambitions of Vladimir Putin.

The complacency is a reminder of events portrayed in the film Munich: The Edge of War based on the Robert Harris novel in which Neville Chamberlain bargains away with Hitler the sovereignty of the Sudetenland.

It would be better for all of us if Russia’s military pressure on Ukraine could be stopped using diplomacy and the west doesn’t get involved in tit for tat sanctions or a war that could threaten precious energy supplies. As we know from the late 1930s, doing deals with autocrats can have terrible consequences.

Jews cannot look on events in Ukraine with any degree of complacency. I was fascinated by a recent exchange on a BBC business broadcast with Sir Martin Sorrell. The advertising tycoon was asked whether tensions over Ukraine could disrupt the global economy.

Sorrell replied that he had a personal interest in the people of Ukraine. His own grandparents had fled from the region when it was in hostile hands. It was an unexpected intervention from the former ‘Habs’ boy who is not given to great personal disclosures.

An accident of history also gives me and my family connection to Ukraine. My late father, Michael, and his family were born and brought up in much-disputed territory in Hungarian-speaking Czechoslovakia close to the Tisza river. It reverted to Hungary in the war years, was occupied by Russia after Yalta and ended up in Ukraine after the carve-up of the Soviet Union. When I, my father, my brother and cousin made a journey of remembrance to the family home in Tiszaujlak in 1997 we founded it had been gifted as a vacation residence to married academics from the University of Kiev.

Jewish presence in contemporary Ukraine is strong. The Institute for Jewish Policy Research estimates that there are 200,000 residents of Ukraine who qualify for Israeli citizenship under the Law of Return. More remarkably, for three years until August 2019, Ukraine was the only country in the world (other than Israel) to have a Jewish prime minister in Volodymyr Groysman and a Jewish president in the shape of Volodymyr Zelensky. The actor-comedian turned politician remains president.

Among Jewish success stories is Ukraine-born tycoon Sir Len Blavatnik, the telecoms billionaire and philanthropist, who lives in London and is often described as the richest person in Britain.  The Jewish population he left behind when he moved to Moscow and New York’s Columbia University is largely elderly, poor and needy. I became aware of their plight through my friend Alex Faiman, who headed a B’nai Brith lodge focusing on clothing, housing and feeding Ukraine’s elderly population impoverished by Soviet oppression. Faiman, who now in his dotage, is looked after by Jewish Care in Hampstead is an unsung hero.

In his late 70s and early 80s, he would travel to Ukraine – sometimes in deepest winter – with scant regard for his own safety. His mission was to ensure arrangements put in place for communal meals for the elderly were working.

Those who follow the work of World Jewish Relief will be aware of its powerful role in humanitarian crises. A long-term focus has been looking after its client base in Ukraine; older Jews still living in the shadow of the last conflict of 2014. Its chief executive, Paul Anticoni, wrote in a recent blog that their life is “already precarious, relying on our support to supplement a meagre pension”. Some Jews live in cut-off separatist-controlled areas of Donetsk and Lugansk and are struggling. The threat of new conflict for these suffering people is not a matter of geopolitics and gas. It is a matter of sustenance, shelter and life and death.