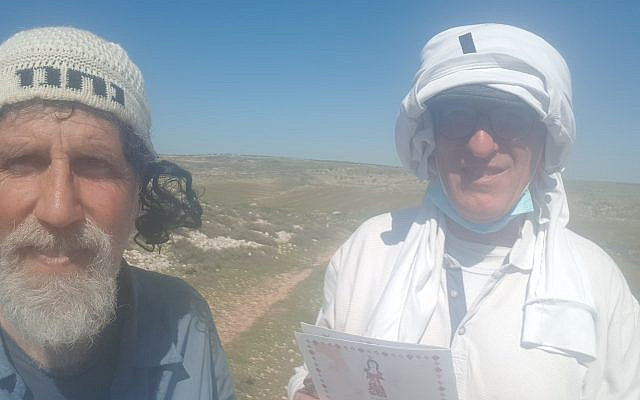 It’s Purim, and I should be laughing at the absurdity of our world. But’ I’m not laughing. I am actually in a bit of pain. I have barely felt most of the blows I have received in recent days from settler youth sent by their elders to accompany cows and sheep on a rampage of theft in the fields of the Taibe junction we had planted with Bedouin shepherds. These are mere children trying to be tough. However, on Tuesday one of them managed to hit me in the back with the stick he was brandishing. Today, there were more blows, and we read the Megillah in the fields, after having expelled those acting with the hatred of non Jews that Haman had for us.

In addition to the physical pain, there is the great sadness that adults are corrupting these children in this way. I have been oscillating between telling them that they are thieves, and we have nothing to talk about, and telling them that I pray they will find an uncorrupted corner of their souls that will inspire them to return to what God asks of them. Almost every day I ask them if they wish to act like the descendants of Abraham and Sarah, or like Amalek, summarizing the words of Rabbi Shimshon Rafael Hirsch I cited last week on our reading for the Shabbat before Purim, Deuteronomy 25: 17 – 19:

Don’t Forget:
Don’t forget a thing if the day will come when you will want to be like Amalek, and like Amalek you won’t want to remember your obligations or to know God, but will look for the opportunity in small or big matters to exploit your advantage to harm other human beings. Don’t forget this when the day will come, and you will want to rid yourself of your role and mission as the Jewish people that you accepted among humanity.

Last night, immediately after the reading of the Purim Megillah, we had an emergency meeting postponed from last night with a representative of the Taibe Municipality, a Palestinian activist, and legal counsel. As I will explain, the Book of Esther came to life for me.

For much of the past three years the struggle has primarily been that of Torat Tzedek and the Bedouin shepherds, with some support from the Municipality. Landowners have taken action when settlers tried to set up additional outposts on their lands. However, from the additional outpost they successfully set up on “State Land,” the settlers have taken their incursions and theft of everything the shepherds plant for their flocks to a new level.

Our successes in 2019 to significantly cut down the level of theft were reversed in 2020 both because of this outpost, and because of incredibly heightened State support for settler aggression this past year. In 2020 settlers forced Bedouin off the land, and now have begun to plow some of it themselves. Between fear of what the State can do to those who raise their heads, and tensions between the landowners and the Bedouin working and living on the lands, the landowners have been overly slow to take the steps necessary to save their lands.

Day after day, we have literally been holding them off. We stood guard as those shepherds who have not been totally intimidated planted. In areas where the fear was too great, we did the planting as well. Because last year’s losses have left family’s financially strapped, we helped secure financing for seed and tractors and contributed ourselves. Settlers have savagely responded by intensifying their attempts to ensure that their flocks eat everything that has been planted just as it is beginning to grow. They want the shepherds who dare to resist to know that they will not benefit from even one stalk of the barley that was to feed their flocks from May through September. They call or “visit” the shepherds to warn them that they will pay a price for any connection with us.

We call the security forces, who say they will do nothing until they see ownership papers, but have taken no action when owners have lodged complaints and even discouraged them from doing so. They usually refuse to identify suspects, but last year froze a case by claiming that the perpetrators were not known. When there are enough of us, we can successfully keep the settler flocks out of the planted areas. I admit there have been days when I have broken the rules and been there alone, because I can’t bear to watch what happens otherwise. That is physically more challenging, and we are safer when we are filming them from several angles.

At the meeting, the lawyer explained the hard facts. With the settlers acting as if the land is theirs, and even plowing some of it, the next step will be to claim that it is theirs. They are already smirking and crowing that the Bedouin have fled, and won’t be coming back. Today, one of them scoffed at the idea that the ownership papers of “goyim” mean anything. At the meeting the activist assured that many would support the Municipality and the owners and the Bedouin if they take the decisive legal and other steps that must now be taken.

For me the meeting was a Megillah moment. The most dramatic scene for me in the Megillah is the back and forth messages between Mordechai and Esther that transform her from a passive woman doing what she is told to a bold and brave leader:

Esther told Hathach to take back to Mordecai the following reply:
“All the king’s courtiers and the people of the king’s provinces know that if any person, man or woman, enters the king’s presence in the inner court without having been summoned, there is but one law for him—that he be put to death. Only if the king extends the golden scepter to him may he live. Now I have not been summoned to visit the king for the last thirty days.”
When Mordecai was told what Esther had said,
Mordecai had this message delivered to Esther: “Do not imagine that you, of all the Jews, will escape with your life by being in the king’s palace.
On the contrary, if you keep silent in this crisis, relief and deliverance will come to the Jews from another quarter, while you and your father’s house will perish. And who knows, perhaps you have attained to royal position for just such a crisis.”
Then Esther sent back this answer to Mordecai:
“Go, assemble all the Jews who live in Shushan, and fast in my behalf; do not eat or drink for three days, night or day. I and my maidens will observe the same fast. Then I shall go to the king, though it is contrary to the law; and if I am to perish, I shall perish!”
So Mordecai went about [the city] and did just as Esther had commanded him. (Esther 4: 10 to 17)

Like Mordechai, I as a privileged Israeli Jew can instruct Palestinians or Israelis in need of public housing, or whoever, what to do. Or, there can be a magic moment when the oppressed become empowered to be partners in fighting for their rights and dignity. We may have reached such a moment last night a moment in which we all realize that there is a reason why we are here. I use the word “partners.” Mordechai speaks of the salvation that can come from another quarter if Esther does not act. We spoke of all the aid that would come if the villagers do act.

Ken Yehi Ratzon May it be the will of God, Who is never mentioned in the Book of Esther, but was present. Together –– the privileged, the oppressed and God in partnership for a better world.