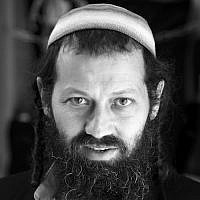 Avigdor Chayut, lost his 13-year-old son Yedidya and his student Moshe in the Meron tragedy. He was next to them and managed to save one son. He searched for the others the entire night until he received the tragic news. He was hospitalized in serious condition.

This is his message to us all (translated and edited from YNET by the author).

As one who believes in Hashem, I know that Hashem has His reasons for what He does. We do not understand these calculations. But I do know one thing, we are in the midst of the biggest divide in our nation possible, and this should not be. We are first and foremost Jews, we should know above all to respect one another. Whether you have a kippa on your head or you do not.

I saw it this last Shabbat at the Ziv Hospital in Tzfat. There are nurses there working together, Arabs, Jews, religious and non-religious and the Hasidim caring that everyone has Shabbat food. Everyone working in complete wonderful harmony.

I ask myself, “Dear God, why does this have to be only in the hospital? Why can this not be on the street? Why do we need to insult and degrade one another, to hunt one another?”

Does it make sense, election after election. Enough!

We are one nation. It is true that we are separated in sectors, the Jewish people were always different tribes. But does this mean that they hated one another? Definitely not!

There is a passage which says: “We are all sons of the same man”!

We are Jews and this is the base for moving forward!
Hashem is teaching us that if not through Corona then through disasters.

Let us learn this lesson in a good way, not in such a tragic way. Believe me, it is not worth it!

About the Author
Moshe David HaCohen is co-director of Amanah: The Muslim-Jewish Trust Partnership in Malmö, Sweden together with Imam Salahuddin Barakat, which builds trust between the communities as well as society - in order to jointly counter discrimination, antisemitism and islamophobia. HaCohen is also director of the Nordic Beit Midrash and network of orthodox rabbis in the Scandinavian counties, as well as manager of the Scandinavian Beit Din, under its Chief Rabbi, Rabbi Michael Melchior.
Related Topics
Related Posts
Comments