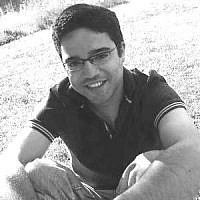 The Blogs
Romeu Monteiro
Apply for a Blog
Advertisement
Please note that the posts on The Blogs are contributed by third parties. The opinions, facts and any media content in them are presented solely by the authors, and neither The Times of Israel nor its partners assume any responsibility for them. Please contact us in case of abuse. In case of abuse,
Report this post.

Last Tuesday was a day of massacre in Jerusalem when two Arab terrorists entered a synagogue during prayers and attacked the people who were there with knives, axes and guns. They killed five people: four Jewish rabbis and a Druze police officer, other four were seriously injured.

The Portuguese government – my government – responded through Rui Machete, Minister of Foreign Affairs. Without distinguishing the victims from the terrorists, Machete said he lamented the “loss of human lives” and called for “restraint from all parties.” He also asked them “to refrain from any action, including incitement or retaliation, which may contribute to the deterioration of the situation”. Machete’s hypocrisy is glaring because he is also an accomplice of the incitement that generated this terrorist attack against innocent civilians.

On June 29, the Ambassador of the Palestinian Authority in Portugal published an article in the Público newspaper where he publicly called for people to commit terrorist acts, writing:

Unless the UN takes immediate action against all these Israeli war crimes and ends the illegal Israeli military occupation of the State of Palestinian, the law of the jungle will prevail in the Holy Land and elsewhere in the region. Because the natural result of the current terror done by the state of Israel should be offset with acts of terror by individuals or factions.

After this article came to the attention of several members of the Portuguese Parliament (MPPs), the following questions were formally addressed to the Minister of Foreign Affairs by MPPs Michael Seufert and João Rebelo:

Machete had 30 days to respond, starting July 2, when he received the questions. He did not respond. Two months later, on September 3, given the lack of response, the same questions were formally sent again by the same MPPs. These also remain unanswered, after more than two months.

Machete seems to think he has no obligation to answer to anyone, and that the questions addressed to him as a member of the government by members of Parliament who represent the Portuguese voters and support and oversee the government do not deserve a response.

Machete empty appeals against “incitement” at this time, when the blood has already been shed and the victims are already dead and buried, reek of hypocrisy and lack of actual concern. The time to do it was before the massacre, when he was confronted with appeals to such acts of terrorism written by a foreign diplomat to Portugal in the pages of a Portuguese newspaper.

Machete knew of the incitement to terrorism and chose not to issue a condemnation and not to take action.

And so I will say to you, Minister: the blame is also yours. The blood of those people killed while praying, the blood of the police officer killed for assisting them, that blood is on your hands.

About the Author
Romeu Monteiro is a PhD student at Carnegie Mellon University and president of the student group Israel On Campus. Originally from Portugal, he is also an LGBT and pro-Israel activist.
Related Topics
Related Posts
Comments