The Blogs
Gil Steinlauf
Apply for a Blog
Advertisement
Please note that the posts on The Blogs are contributed by third parties. The opinions, facts and any media content in them are presented solely by the authors, and neither The Times of Israel nor its partners assume any responsibility for them. Please contact us in case of abuse. In case of abuse,
Report this post. 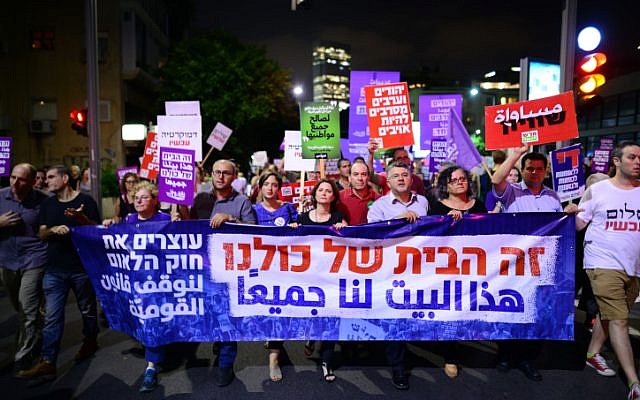 People take part at a protest march against the proposed Nation-state Law in Tel Aviv on July 14, 2018. (Tomer Neuberg/Flash90)

Eichah, how, dear God, can these things be happening in the Jewish state now? A Conservative rabbi has been brought in for police questioning because of a wedding he performed? All single and gay men now face up to three years in prison for surrogacy? A nation-state bill was passed that flaunts Jewish dominance over Muslims and Palestinians?

Over the years, I have engaged in unceasing efforts to counter the rising anti-Semitism on the left, to stand up for Israel, to remind the world that Israel is a true democracy simply trying to survive. Eichah, how, dear God, could Israel be making it increasingly difficult for me and those like me here in America to make our case for its support? And beyond this, I’m personally having a really difficult time. My whole life, Israel has been a constant source of joy. Of course there was anxiety about threats from hostile neighbors. Of course there has been constant heartache over the Israeli-Palestinian conflict. But there was always an undercurrent of pride and gratitude that not only was there a Jewish state, but there was one that upheld democratic and progressive values that are a light to the nations.

I am grateful that Israel continues to be a democracy whose values are incomparably better than its neighbors in the Middle East. But is the current Israeli leadership trying to move away from that ideal? It certainly seems that way from here.

How can I, as a progressive American Jew, not invoke Eichah, the Book of Lamentations that we read on the Ninth of Av, at a moment like this? While this is certainly not the Hurban, the destruction of the Temple, how could I not invoke Eichah as we are about to commemorate a time in our history when our sense of precious connection to God in the Land of Israel was severed? As a progressive American Jew on this 9th of Av, how can I not see a rise in Sinat Chinam — of baseless hatred, of Jew turning against Jew — when rabbis are being called into the police for performing Jewish weddings, and Jewish gay men are being threatened with prison for wanting to start a family? On this 9th of Av, how can I not feel that there are those actively seeking to undermine all the democratic and progressive values that I have held dear about the Jewish state?

But like my ancestors, I refuse to be bowed down by this rise in discrimination, hatred and fear in the Land of Israel. I refuse to give up on my Jewish homeland. I refuse to give up on the ideals that the founders of the State of Israel envisioned in creating an open and democratic Israel for all its citizens. I remain committed to the Jewish values of Ahavat Yisrael, of promoting love between all the Jewish people. I remain committed to the lessons learned from thousands of years of our history — namely, that any state bearing the name of the Jewish people must never oppress the stranger, the orphan, the widow, or anyone who is marginalized or oppressed in our midst.

Like so many progressive American Jews in this country, I am exasperated. Maybe even exhausted. But I am not giving up. I will still fight for Israel’s right to exist. I will still seek to counter the anti-Israel, anti-Semitic voices in this world, even as my case is all the more difficult to make in light of Israel’s recent unjust actions .

Most importantly, I will not cease to speak out loudly and clearly as an American Jewish leader when Israel strays from its democratic and Jewish ideals. The stakes are simply too high. We must all, in the American Jewish community, speak out loud and strong that the current Israeli leadership is leading Israel in an anti-democratic and dangerous direction. We must speak out to ensure that there will never be another Hurban, and that the Jewish homeland will always be a land that teaches the Torah of justice, that fulfills our command to love, and that walks in the ways of God.

About the Author
Gil Steinlauf is a Conservative rabbi, and the director of the Hineni Fellowship for LGBTQ Jewish Leadership and Scholar in Residence at the Jewish Federation of Greater Washington (DC).
Related Topics
Related Posts
Comments