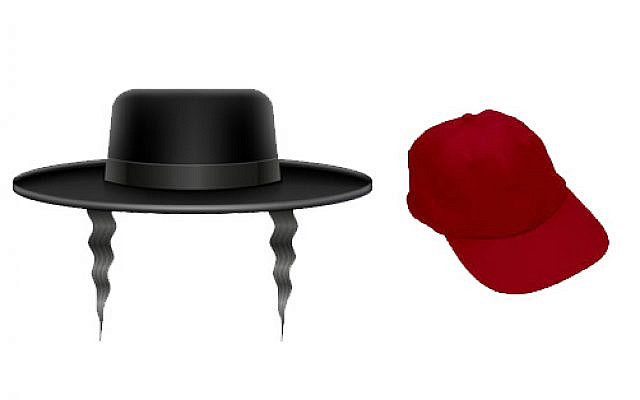 Are we truly different under the hat? (Courtesy)

Living a Modern Orthodox Jewish life, meant that I felt at home in a broad range of observance practices, providing they weren’t too far to the left or to the right, which meant that I was not overly comfortable in reform or Charedi/Black Hat services. We raised our family along with Modern Orthodox tradition, including sending our boys to Day School and encouraging them to spend a gap year in Israel. Over the last forty-plus years, (I’m in my late sixties) there were periods where I davened, (prayed) three times a day and attended multiple shiurs (classes), and other periods where I davened at home or skipped services altogether.

On all accounts, I could say with certainty that I was clear about my place within my ancestral tradition. That is why it felt mystifying to find myself davening in a Hasidic Black Hat Shtiebel (small house of prayer) for the past few months.

My father was an old-time socialist, and I grew up in Israel, being completely secular, yet I spent much time learning, thinking and writing over past decades on subjects relating to Judaism and to the Jewish way of life, including creating a video interview series* that has enjoyed over a quarter million views and thousands of subscribers. With our sons all grown and having their own families, we downsized from our suburban home and returned to New York City, where we lived thirty years ago. However, with the pandemic disrupting life everywhere, there were no synagogues open and maintaining our religious practices became a challenge.

I remember the first Shabbat we spent in our Upper West Side apartment, which we chose carefully to have access to many synagogues. Life was disrupted and we felt we’d be remiss not to find if there were any open places of worship that honor the CDC’s recommendation of masking, social-distancing and other requirements. Thus, I decided to take a walk and look for any religiously observant-looking Jew out on the street and ask if and where there may be a prayer service taking place. To my surprise I found that two doors from my building there was a Shtiebel, Babad, that has been in existence for over half a century, and which was attempting to run a Minyan (prayer quorum), struggling daily to find the necessary quorum of ten men.

With no other shuls (Synagogues) open, I decided to go in. I was aware of the reputation Charedi Jews had of ignoring the CDC’s rules, but to my surprise, I found the place extremely particular in maintaining all safety requirements. Thus, I decided to give it a try. Had I known of another place, more aligned with my Hashkafa (Philosophy), I’d have gone there, but this was the only place open and its proximity to my new dwelling was hard to resist. That was six months ago, and despite some shuls slowly opening their doors, I am still davening among people who put on their black hats and a gartel (A ritual belt) when praying, and who look nothing like any Jews with whom I have ever associated.

My obvious question is why? Why am I still davening there when people have gotten vaccinated, and shuls have been opening around us? Is it the convenience? I decided that it is a topic worthy of introspection.

During the same period, with the pandemic ravaging our ordinary life, my youngest son, a talented musician, decided to teach me how to play the piano. With little else going on, I gave it a try. I was familiar with the scale and knew of octaves and the basic notes, but my hardest challenge was in trying to get both hands to play together, simultaneously. Immediately, I found I’m far from being naturally ambidextrous. I spent hours trying to tell my fingers where to go, but they refused and I was ready to give up, when I noticed that slowly, my fingers were finding their place. I made less mistakes and, before I knew it, I was playing the scales, with both hands up and down with ease. To my surprise, my fingers figured out their place ahead of my brain and if I tried to involve my mind in directing them – it didn’t work. They could only do their dance if left alone and using their own self-learned routine.

It was not much different from my Shtiebel attendance. For as long as I asserted my decades-old inculcated identity into my Jewish practice, I felt conflicted and confused. Yet once I let go of all preconceived notions and let my feet take me, I discovered that not only did I feel comfortable attending the Shtiebel three times a day, but I also joined the Daf Yomi, (daily learning of a page of the Talmud), which I had never felt comfortable with previously. Before long, I became a regular, created friendships and felt that I belonged, even though I dressed differently, didn’t wear a black hat, nor had a gartel to display. I was a comfortable stranger amidst a culture I considered alien less than a year earlier and I was at peace.

As matter of fact, I’ve been happier than I can ever remember when attending other synagogues, which surprised me. It was as if I found my place and as strange as it sounds, this was no place I recognized. Still, I appreciated being welcomed amidst these warm and kind Jews, with whom I couldn’t imagine I’d have much in common, only a year ago.

Two weeks ago, My new grandson was born, which delights me greatly. It’s my sixth grandchild, yet I look at him with the same amazement I’ve had for all my kids and grandkids. How is this helpless, little, dependent eight pounder, I wonder, going to find his place in life? I’ve seen with astonishment how my kids and grandkids have evolved into the wonderful people they are, and I realize the process is not so different from my piano apprenticeship. It’s a process that involves moving cognitive instructions and reasoning into a complex automation, akin to muscle memory, where we do thousands of intricate moves without conscious thought, availing our mind of the opportunity to consider other situations and acquire new skills.

It may be muscle memory that keeps me going to my new-found Shtiebel, but I’ve realized it is not only tolerance for the stranger, but acceptance for people different from us that we must learn to exercise. If we stop applying our ideological bend and critical judgment to every step we take, we may be surprised to find our lives getting a lot richer. I shared my newly discovered realization with a good friend who is very committed to egalitarian Judaism, and she challenged me on the Shtiebel’s conservative views. It was the stereotypical outlook, which I too had held not long ago, and I could not convince her that she has more in common with the Shtiebel members than she can imagine. Naturally, I found areas where my views are different. We obviously don’t agree on everything, but as a member of the congregation explained to me, they are not political. They just come to celebrate their Judaism and practice its rituals together.

It seems the pandemic has had some positive, if accidental outcomes.

I’ve come to learn that we can still hold on to our ideology, but it should not stop us from experiencing new boundaries that we never could have imagined if we didn’t try new things. I found my home in this unlikely place because I gave it a try.

May the coming spring and the upcoming Passover holiday welcome a new beginning and leave the pandemic behind. We’ve all had enough.