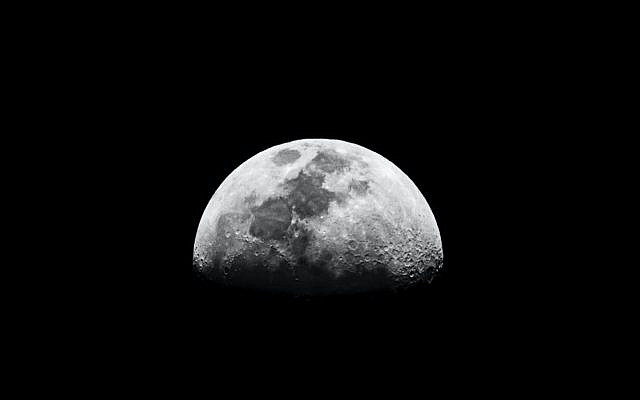 Half Moon by Bruno Scramgnon (Creative Commons)
In the quest for greater knowledge, humanity has always sought to stretch the boundaries of the possible. Over 50 years ago, the Apollo program sent astronauts Neil Armstrong, Michael Collins, and Buzz Aldrin on a mission to the Moon for the staggering cost of $156 billion (over the course of the entire program). Today, the comparable cost of sending a small payload to the Moon has fallen to a mere $460 for a 0.5 inch capsule (courtesy of Astrobotic). Through the kindness and dedication of a previous purchaser of such a service, I have had the extraordinary opportunity to send a digital copy of my book, Talking With God, to the Moon, with a scheduled arrival of sometime in 2021.
My book, which will now travel to the Moon, discusses the Hebrew Bible’s remarkable description of communication between God and Moses, leader of the Israelites, who were newly freed from slavery in Egypt. This communication was accomplished through the use of a unique device, the Ark of the Testimony.
Given my interest in the communication function of the Ark, what struck me about the Apollo mission was the relative ease with which the astronauts and NASA scientists, who were separated by some 238,700 miles of space, were able to talk to one another.
Today, telephones, televisions, radios, communication satellites, and, of course, the internet are taken for granted, but during biblical times there were no such devices.
As the Israelites’ leader, Moses had to use his time and energy primarily to facilitate communication with God. Yet, the development of a working system of communication was not easy. The steps to its eventual operation evolved out of uncertainty, fear, confusion, and extreme danger. What happened is outlined in detail in my book Talking With God.
One can only wonder what Moses would have said had he been here today to witness the miracles of moon-bound travel and communication.

The above was written with contributions from Adam R. Hemmings, a graduate of the University of Chicago and the School of Oriental and African Studies, University of London, where he specialized in Egyptian and Near Eastern studies, as well as archaeological and heritage law. He is currently engaged in research for his PhD regarding the repatriation of Egyptian antiquities removed during the colonial period.
About the Author
Roger D. Isaacs is an independent researcher specializing in Hebrew Bible studies and the author of two books, "Talking With God" and "The Golden Ark". Isaacs' primary research site was the archives of the Oriental Institute at the University of Chicago, where he is a member of the Advisory Council. He also conducted research at the Spertus Institute for Jewish Studies, as well as digs, museums, and libraries in many countries, including Syria, Jordan, Turkey, Egypt, Israel, and England.
Related Topics
Related Posts
Comments