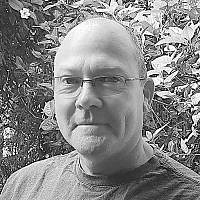 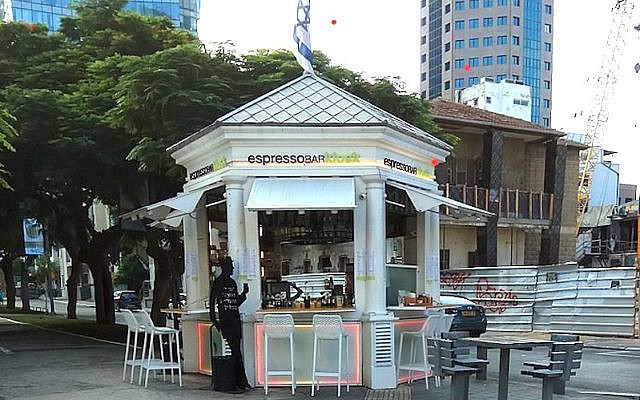 June was Tel Aviv’s month. From the Gay Pride Parade to this weekend’s White Night, The City That Never Sleeps is busy celebrating its successes and merits.

Local Tel Aviv patriots are not the only ones to recognize The White City as an international wonder. Already in 2003, UNESCO added Tel Aviv to its listing of world heritage sites. With over 4000 buildings, Tel Aviv is home to the largest collection of Bauhaus-modernist architecture in the world. Forbes Travel listed Tel Aviv as the 2nd most highly recommended tourist destination for 2021. Time Out surveyed 27,000 people and Tel Aviv wears the crown as ‘the funnest city in the world in 2021, and was listed number eight out a list of 10 best world cities alongside San Francisco, Copenhagen, Porto, and Tokyo. Tel Aviv is internationally celebrated as one of the friendliest LGTBQ cities in the world, and home to the largest Pride Parade on the planet. And in case you thought that I forgot, Tel Aviv continues to hold its title as one of the top international start-up cities.

Tel Avivians have always had a potent pride about their city. Nathan Alterman – one of the great Hebrew poets of modern times – was a fierce local patriot. In ‘She Certainly Has a Little Something,’ he caricatured the ‘Jerusalem professors’ who looked down from Mount Scopus and the Rehavia neighborhood and derided Tel Aviv for the young city’s lack of history, of holiness, of gravitas. Alterman countered that it was Tel Aviv’s freshness, freedom, and even frivolity that made it special… gave Tel Aviv a certain je ne sais quoi. (B’Chol Zot Yesh Ba Ma Sh’Hoo, 1946). And although the gender characterizations of the 1940’s poem and popular song have not stood the test of time; Tel Aviv and its local patriotism certainly have endured.

And for good reason.

Not far from the corner of Allenby Street, a modest whitewashed building – today under construction (What isn’t under construction in Tel Aviv today?) – was the epicenter of one of the most significant revolutions in Jewish history: the declaration of the State of Israel. Here the leadership of the Yishuv and the Zionist movement demanded that the Jews as a nation – an indigenous people returning to a portion of their historic homeland after centuries of exile – take responsibility to fulfill like all peoples the basic human right of self-determination. Declared following the Second Word War and the murder of European Jewry, announced during an uninvited, expanding war that would demand a brutal price for both Jews and Palestinians, it was not apparent to any of those present on that dramatic Friday afternoon that the bid for freedom would meet success. Next time that you pass 16 Rothschild Boulevard consider how far we have traveled since May 1948 and how far we still have to go.

And although they do not possess the power of momentous urgency of Independence Hall, no walk around Rothschild Boulevard can ignore the kiosks scattered along the length of the Boulevard – each one a small sanctuary to a simple, yet significant truth of the success of Tel Aviv and of the State of Israel. Throughout the day and most of the night, people are huddled over espresso, arak shots, and lemonade spiked with mint. Couples ponder their love and lives. Neighborhood parliaments facing piles of newspapers debate the issues of the day. Others are simply resting alongside a faithful pooch. 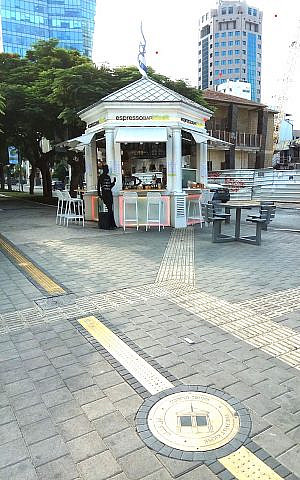 There are those who look at the café culture as indulgent and indolent. The father of the academic study of Jewish mysticism, an ardent Zionist and humanist; Gerschom Scholem (From Berlin to Jerusalem, Am Oved, 1982. P. 70) recalls the disdain that Hermann Cohen held for Zionism. Cohen decried, “those blokes – they want the Jews to be happy. Cohen was a brilliant Neo-Kantian and foundation stone of German Jewish philosophy. Cohen touted Judaism’s great triumph as it’s ethical monotheism. A nation with a mission to perfect the world does not have time nor should it have interest in simple happiness. Tel Aviv and several of Zionism’s leading lights like the early Ahad Ha’Am, and Yosef Haim Brenner, and more recently A.B. Yehoshua argued against Cohen and for the kiosk. The measure of the success of Tel Aviv and the State of Israel is the simple fact that for nation of former refugees – exiled and hounded around the world – being able to sit, read the paper, and drink a coffee without constantly looking over our shoulder is a major repositioning of the place of the Jew in the world.

And with that said, there is something to the criticism of happiness simply as the pursuit of quiet, creature comforts, and material success. A deeper happiness and joy as pointed out from Koheleth 3:12 to Ralph Waldo Emerson depends on doing good. Our own happiness is intertwined with the good we bring to others. Tel Aviv also offers this brand of happiness – from social consciousness of graffiti artists to the numerous artists, educators, and activists devoting their time to making Tel Aviv a little more humane, a little more happy.

Berry Sakharof – one of Israel’s finest rock and rollers – captures something of the special character of Tel Aviv and a suggestion about happiness in his song ‘A New Spirit.’ The song is based on the verses from Ezekiel 36:26 – ‘A new heart also will I give you, and a new spirit will I put within you; and I will take away the stony heart out of your flesh, and I will give you a heart of flesh.’ Sakharov offers Tel Aviv in comparison to the historical yoke and the messianic fixations of Jerusalem. He sings, responding to Naomi Shemer’s ‘Jerusalem of Gold,’ that Tel Aviv is not a hostage ‘of mirages and magic…’ Tel Aviv ‘is not a captive in her dream.’

It is not enough to rest on the images and narratives of how we want to remember Tel Aviv. It is not enough to wax nostalgic about a past that is likely more a wishful thinking than it is an accurate representation of real life in a large modern city. What about the traffic and the poor air quality? What about the glaring lack of shade trees particularly in Tel Aviv’s southern working-class neighborhoods? What about Tel Aviv’s homeless? And what about the fact that among Tel Aviv’s international records is the dubious honor that Tel Aviv is currently listed as the most expensive city in the world – above New York, Hong Kong, and Zurich.

At the end of Rothschild, there was this week a tent village. Some thirty tents of various sizes and colors with signs posted that ‘the people demand social justice.’  The village was still small. I heard on the Israeli news that it was removed, and the protesters are taking their fight to the Knesset and surrounding gardens and parks of Jerusalem. The recent Rothschild tent village did not grow to the size of the mass protests that Israel saw in 2011 around the cost of living – food, housing, basic goods and services… Yet….

The need for ‘a new heart and a new spirit’ remains urgent. Many young Israelis feel that they have done all that they were educated to do. They finished school and attended college. They served in the army and do their reserve duty. They get up in the morning and go to work. They pay their taxes. However, they cannot afford to live in Tel Aviv and many other places in Israel. Tel Aviv has become a city for the wealthy and for tourists. Israel’s best and most talented feel that their horizons are limited. Why not move to Berlin? Why not take a European passport?

Some thirty tents stood at the end of Rothschild this week They were not only protesting the cost of living. They were protesting for the chance – that a country built with little resources and great grit – will recognize that the question of our survival is not mainly about external enemies real and imagined. Especially with another election approaching, politicians of all stripes and intentions will visit open air markets, protests, and tent villages. They will shake hands, make promises, collect their photo opps, and continue walking. Our survival depends on aspiring to reach a tolerable gap between ideal and real, about being sure that our children and grandchildren can live and flourish. Solidarity in Israel needs to be resuscitated from slogan to a foundation for policy and life. Let ‘a new heart and a new spirit’ begin on Rothschild and from Tel Aviv.