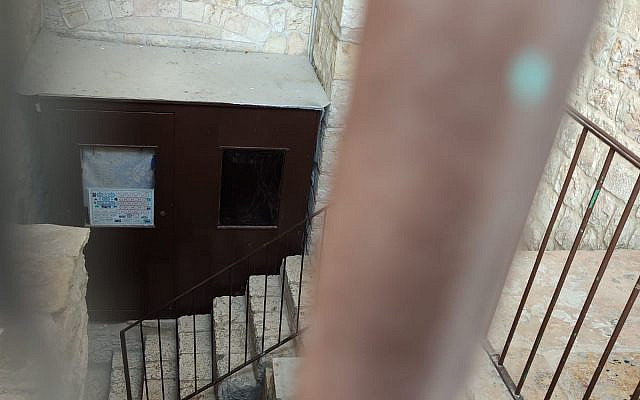 The steps leading down to the mosque at the Barclay Gate. (courtesy)

The lead editorial of Haaretz on September 19 concerned itself with the recent reality at the Temple Mount where “under police protection, groups of Jews who ascend the Mount hold daily morning and afternoon prayers, together in a quorum”. The paper asserts that “Israel is breaching the status quo” thereby at the holy site.

While it agrees that there is an argument, “which liberal secular people are compelled to support” in that there is a basic principle of democracy that should be upheld, namely: freedom of worship, nevertheless, the ‘newspaper for thinking paper’, as Haaretz publicizes itself, that principle “constitutes needless provocation” in the larger context and therefore should be overridden. It actually is “hypocrisy” for the Western Wall Plaza is where there is no freedom of worship for Conservative or Reform Jews and women seeking more egalitarian prayer services.

Haaretz demands that the status quo be quickly restored, one the paper is able to make by employing arguments that simply ignore the facts.

In the first instance, freedom of worship is not only a democratic principle but it is the law of the land. The 1967 Protection of Holy Places Law guarantees a protection “from anything likely to violate the freedom of access of the members of the different religions to the places sacred to them or their feelings with regard to those places”. A violation of that freedom can be punished up to a term of five years. Of course this law is ignored in the partial sense even though the High Court for Justice recognizes its validity. It has, however, always awarded the police the final decision based on considerations of public order.

And that threat to public order is not from the Jews desiring that their rights be upheld but from Islamist quarters. It is the Muslims who riot, after remaining in the mosque all night, collecting stones and blocks and preparing firebombs or fireworks to use against Jewish visitors. The police are called to protect them. That protection relates as well to the Wall Plaza below, well within their aim. The threat is constant but to avoid such incidents, the Jews are those who must yield on their rights. Unfortunately, the logical conclusion to that juridical line of thinking simply invites, paradoxically, potential counter violence.

If, indeed, the status quo is to be upheld, it should be all-inclusive. Why can the Waqf build three new mosques there (under Al-Aqsa, at the Golden Gate and at the Barclay Gate) and yet not be violating a status quo?

The steps leading down to the mosque at the Barclay Gate (credit: Y. Medad)

Why are metal detectors, used back in 2017 after a Muslim snuck a firearm into the compound and murdered two policemen, an infraction of the status quo and therefore need to be removed despite saving lives? Why are surveillance cameras, necessary to observe terror preparations or identify perpetrators of the same, claimed  to be a status quo infraction by Jordan? Why is the status quo but one way: in favor of Muslims and to the detriment of Jews?

Other questions should be asked such as why are the Waqf employees’ salaries paid by Jordan’s Ministry of Awqaf Islamic Affairs and Holy Places or funds from the Monarchy go to Temple Mount improvements? Indeed why is it a Jordanian institution? Is it that the area is extraterritorial to Israel? Why are there anti-Israel graffiti slogans painted there? Why will Israel not rebuild the access route to the Mughrabi Gate instead of replacing a few wooden planks, a construction that does not eliminate the danger to worshippers, tourists and other visitors to the site?

Haaretz should also wonder why Jordan does not uphold its commitments agreed upon in Article 9 of the 1994 Israel-Jordan Peace Treaty to-wit: “Each party will provide freedom of access to places of religious and historical significance…[and]  will act together to promote interfaith relations…with the aim of working towards religious understanding, moral commitment, freedom of religious worship, and tolerance…”.

A newspaper’s viewpoint and position outlined in its editorial should present a rigorously researched and fact-based argument. To publish an editorial that ignores facts, misrepresents them and so misleads is to do a disservice to its readers. That is not journalism but a mobilized media outlet.