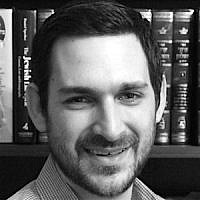 The Blogs
Sam Reinstein
Apply for a Blog
Please note that the posts on The Blogs are contributed by third parties. The opinions, facts and any media content in them are presented solely by the authors, and neither The Times of Israel nor its partners assume any responsibility for them. Please contact us in case of abuse. In case of abuse,
Report this post.

Scrolling through my Facebook feed over the past few weeks has been devastating. Before, I did not understand how many of my female friends and colleagues routinely felt unsafe, faced verbal abuse and/or confronted sexual harassment and assault. (Yes, I know men are abused as well, but that wasn’t the focus of these past couple weeks, and is not what I am going to be focusing on here)

As a rabbi, I sought explanations in our rich tradition and texts. As luck would have it, I came across a piece of Talmud that provided me some comfort.

This past Rosh HaShana, I resolved to learn more Torah on my own. Surprisingly, this is difficult when you are the Rabbi of a synagogue. Your time devoted to learning is frequently exhausted by questions, class preparations and speech outlines. To combat the problem, I started learning Talmud during my daily commute.

On the 21st page of Sanhedrin, the Talmud discusses the aftermath of the Amnon and Tamar story. For those that don’t know the background, the story appears in the second book of Shmuel Chapter 13. Amnon, King David’s firstborn, developes very strong feelings for his half sister. His counselor Yonadav helps him craft a plan to get her alone. When alone, he rapes her, despite her plees to stop, even asking for him to marry her outright instead of the assault. He does not listen. Afterwards, she cries, tearing her clothes and putting ashes on her head, regular signs of mourning for a lost one. She is then taken care of by another brother Abshalom, but never recovers. King David hears, is angry but does nothing to his firstborn.

On the surface, the story is disturbing. A powerful man takes advantage of a woman and casts her away. While believed, the woman is castigated; the man is still loved by the King. The Talmud, in Sanhedrin 21, explicates the verses, telling a different story.

This alone is instructive. Frequently, cases of rape are made complicated due to a women’s wavering intentions. In our story Tamar is even willing to marry Amnon, but clearly shows her lack of consent by fighting Amnon during the assault. At the same time this is clearly considered rape, and the Torah and this Rabbinic commentary clearly defines it as rape.

Then the Talmud continues (translation from Sefaria.org)

There are a couple things to note in this passage. In the 1960s Dr Melvin Lerner did studies on the issue of victim blaming. Through a couple studies, he theorized that we blame the victim because we want to believe in a just world. When something bad happens to someone, we want to believe it was because of something they did, otherwise, there is no justice. Therefore, we tend to victim blame, treating the victim as if they had it coming. However, when Tamar cries out after being violated, everyone believes her. True, she is the King’s daughter, but so is the perpetrator who she is accusing. Not only do they believe her, but they talk of her great virtues. They don’t ask what Tamar was wearing, or if she drank too much that night. They trust her, and worry about everyone else. They take a lesson from Tamar that everyone is in danger, instead of trying to limit it to just this one case.

The Talmud then continues to explain what fence Tamar established after the Amnon incident.

אמר רב יהודה אמר רב באותה שעה גזרועל הייחוד ועל הפנויה                      Rav Yehuda says that Rav says: At that time they decreed about seclusion, that a man should not be secluded with women who are forbidden to him, or a single woman.

So often we put the responsibility to protect themselves on those being victimized. Here, the injunction is not put on women, but on men, to take responsibility and not be in a situation where the Amnon and Tamar story can happen.

I have seen a variety of posts on how the laws of Yichud could have prevented many of the sexual assault scandals coming out. That may be true, but this law is instructive beyond itself. When the community sees a problem they try to find a solution that attacks the problem at hand. Even more so, they let those that were vulnerable, in this case Tamar, decide what would make them safe. In Biblical Israel, that was an injunction against seclusion. In 2017 it may be disgrace on social media and real life. In the end of the day, we must listen to people when they say they do not feel safe, and elicit suggestions to create a physically safe environment.

As scandals keep emerging, we are only closer to those goals. Sexual assault will no longer be something we can ignore and push aside. May we come to a place where it needn’t have to be.

About the Author
Sam and his wife, Hannah, moved to Crown Heights 4 years ago when he became the Rabbi at Congregation Kol Israel (CKI) . Sam received his ordination from Yeshiva University where he also received his MA in Philosophy, and BA in Mathematics. During the week, Sam works for Munich Re as an actuary, and makes too many puns for his wife's well being.
Related Topics
Related Posts
Comments
Advertisement