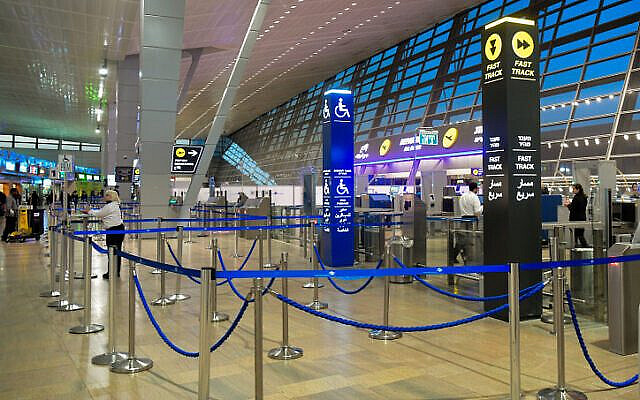 Few want to hear it right now, at this moment of uncertainty, fear and herd instinct – but is there another way to the one that will destroy the world economy and upend our entire civilization?

It seems almost churlish to ask it, because civilized people are in a fussy state of righteousness about quarantines, handwashing, social distance and the like.

That self-righteousness is an understandable reaction to the criminal irresponsibility of a series of dangerous players – from the Chinese government that early on suppressed information about the virus to the American president clearly unfit to deal with the situation  to Israeli haredim who still refuse to comply with restrictions.

We are at a dangerous moment when despotism in the East, a populist uprising against science and reason in the West, and people who think God whispers in their ears are combining to endanger the entire human race.

For some, there is a quite reasonable narrative that holds that God exists and this is his/her way of putting us on notice that our stupidity as a species may lead to our demise. This would be the common factor of coronavirus and global warming.

For the more secular, there may be a certain schadenfreude in seeing Mother Nature make itself heard by those who would make war on science.

So we find ourselves at a moment when there is widely accepted dogma that entire regions and even countries must be shut down to stop the spread. Inevitably, markets are tanking – 40% (!) from last month’s high. Unimaginable millions are being thrown out of work. If we continue this much longer there will be another Great Depression; masses will lack shelter and food and healthcare and untold numbers will die not from coronavirus.

The willingness to acquiesce to this path for at least a while has to do with assumptions that a spread of the virus could affect half the population and that almost 4% of those affected will die. The World Health Organization and other venerable global bodies are behind those early numbers.

The first number needs some contextualization. The H1N1 swine flu outbreak of about a decade ago is estimated by the US Centers for Disease control to have infected up 60 million Americans, on the cusp of 20%. Surprising, isn’t it? That’s because some didn’t even know they had it – and the death rate was too low to seize the spotlight away from the Kim Kardashians of our “culture.”

I submit, then, that the issue is the mortality rate of COVID-19. Data on this so far shows wide fluctuations by geographical location. This could be due to many factors, including the age distribution in general and the age of affected populations (those infected in Germany were young, so mortality is super-low).

Mainly, though, it would seem to attach to the pesky issue of the numerator and denominator.

We probably catch most of those who die of the disease caused by the virus – certainly a pretty high number, because deaths attract attention and are investigated. But we do not know anywhere near how many people actually have it – because those with mild symptoms, infected though they are, don’t get tested, hardly know they have it, and their non-counting skews the numbers. Certainly we are more likely to have caught a higher percentage of the deaths than of the infections.

If that is true, and you don’t need to be a virologist to decide, then it is extremely likely that the actual mortality rate from COVID-19 is much lower than the initial data suggested.

So Donald Trump of all people may have actually been right in his “hunch” that the true death rate is under 1%. That may be absurd, and it is painful to admit, because the Stable Genius has otherwise badly bungled the crisis, but it is only one of the absurdities to have landed in our laps.

Look at a close-to-laboratory case like the Diamond Princess ship, where everybody in effect was exposed. It showed a death rate of 1%, and as elsewhere mortality was overwhelmingly skewed toward the very elderly (in some countries the average age of fatalities is pushing 80). Furthermore, cruise ships tend to have an older-than-average population to begin with, probably further driving up the rate.

Such scenarios are also suggested by analyses from Wuham province in China where the virus both initiated and has been (possibly) suppressed. And Italy’s national health authority says 99% of those who died – and Italy is top of the charts in deaths – had previous medical conditions.

So while we wash out hands, and quarantine, and socially distance, this type of data, if it is eventually clearly confirmed, will be critical toward determining if we can get through this without devastating the world economy – which, again, is a path that would certainly cause many deaths as well, and possibly many more deaths. Poor people die more often and die younger and commit more violent crime and have less access to healthcare (especially in the US, which is another strange situation).

We have no way of knowing how the numbers will play in the coming two to four weeks. I am not recommending any particular path – just modeling out a what if.  It is not a medical prognostication — I have no expertise in that — but a political and societal question of the sort that all of us must consider.

If, for the sake of this exercise, it emerges with clarity the death rate of those infected actually turns out to be 1% or under, and that fatalities are overwhelmingly the very elderly and those with enfeebling existing conditions, would we choose another path? (Israel’s own mortality rate is at present 0.2% and within the demographic.)

Would we choose a path that would not shut down the planet and devastate what civilization that we have built? Some of it, after all, may be worth saving. It seems worth contemplating, even if the main voice of this notion at present is the ignorant Mr. Trump.

I would imagine there is a chance that we face this juncture within about a month or less.

What that path would be is a complex matter and I cannot claim to be an expert in the rescuing of civilizations. Some experts propose we begin with a total isolation of two weeks or so for everyone, limited in time, so there is clarity, and aimed to surface the disease in those infected. After that, with most people returning to normalcy, steps to consider might include:

This will still cause financial problems,  disrupt society, and lead, tragically, to some deaths. But it does not mean that 1% of the infected will die (as some will doubtless jump to claim), because we are sequestering the vulnerable until the virus passes.

Critically, it could mean that as a society we leverage the crisis to do better and invest more where we should. It would be a sort of Marshall Plan for the elderly, the infirm, for healthcare — and a proper comeuppance for the reckless populists who wage war on knowledge and facts. The United States in particular could use a dose of this.

And we also rescue our civilization, making the world safe for reality TV once again.