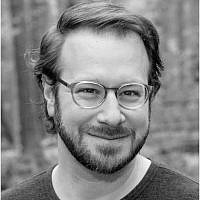 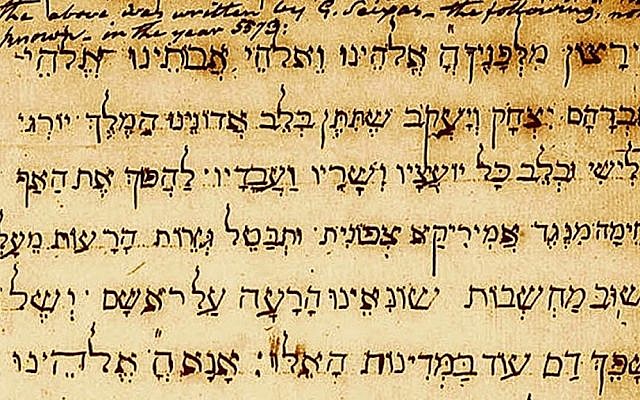 Detail from a 1776 prayer to change King George's heart detail 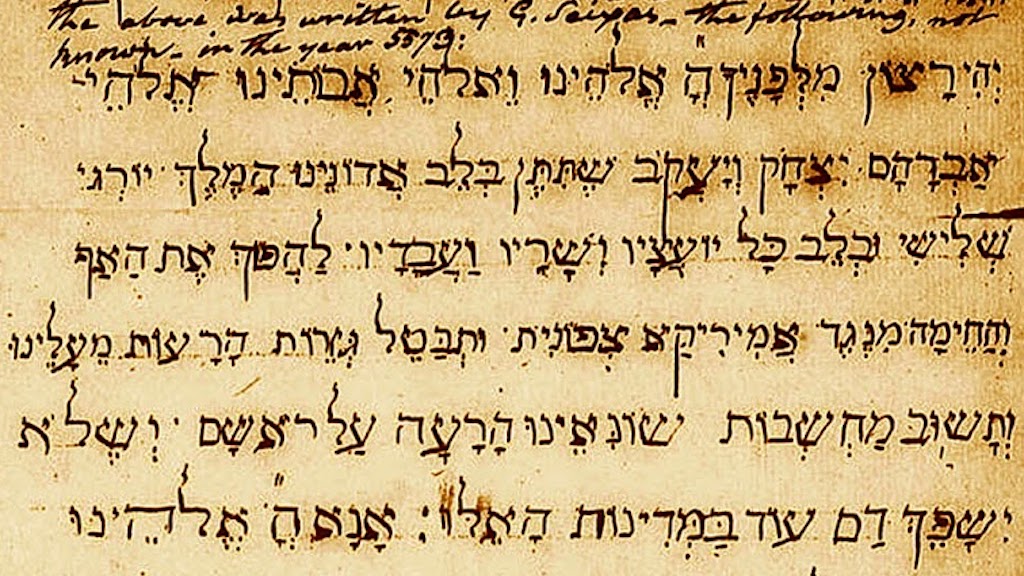 Open almost any Jewish prayer book in America and among the traditional Jewish prayers dating back to biblical and rabbinic ages, there are usually two additional prayers that are much more modern: the “Prayer for the State of Israel” and “Prayer for Our Country/Welfare of the Government.” Both of these prayers exalt the strengths of the nations, pray for the wisdom, compassion and foresight of their leaders, and call upon the judiciousness of heavenly favor so that the nations and their people be granted peace and prosperity from generation to generation. These prayers, which are read sometimes in Hebrew, many times in English, are often read both collectively and responsively by the congregation.

I have been thinking a lot of these prayers recently because, in candor, I have generally been more focused on the prayer for Israel than the prayer for my country (the United States). Israel always seems to be deserving attention of my prayers, particularly given its relative youth as a modern state, the tough neighborhood in which it is located, and the myriad of complex domestic and foreign issues it faces as both a Jewish and democratic state. America, on the other hand, though it is still a relatively young nation, has the strength of a global superpower, freedom from conflict on its borders, and a stable system of government that is grounded in predictability of process, systems of checks and balances, and peaceful transitions of power (and thankfully, fewer periodic elections).

Yet, over the past few weeks and months, I have felt deeply uneasy with the realization that the “Prayer for My Country” is more important than perhaps I have realized. Falling into the easy appreciation of what makes our country so exceptional, I lost sight of the difficult understanding that our country too faces complexities and challenges that demand not only vigilance, but also thoughtful and aspirational reflection of spirit (which is how I define prayer). To pray for other nations (even Israel) without focusing on a prayer for my own homeland is at least an act of hubris and, even more so, irresponsible.

While this presidential election has been the catalyst for this personal realization, I should have realized it much sooner. The language of divisiveness and an increasing polity of polarization have been ripping at our seams for too long. The overwhelming trends of racial injustice and economic inequality, as well as the increasing exclusion of far too many individuals from opportunities of a quality education and economic advancement, are derailing the sense of common cause that have been the root of America’s exceptionalism. Simultaneously, trends related to the way we engage with each other in social and spiritual ways leave us (paradoxically) more technically connected and spiritually isolated than ever before. All of these trends demand as much unyielding daily action as they do impassioned daily prayer, yet spiritual reflection is nonetheless something that can only help, not hurt, in the acceleration of our country’s arc toward progress.

That isn’t to say I don’t think many people have been praying recently. In these final days of a long and acrimonious campaign, no doubt many of us are praying for “our candidate” (whichever that candidate is) to win. However, perhaps among those personal payers, we need to also realize that praying for our country is more than just a prayer for our person or party. Whoever wins the election on Tuesday will need to be enveloped in the same aspirations of goodness that we aspire to grant to the person we prefer to lead our country.

Regardless who wins, we will need to think, reflect, act and pray for a healthy re-weaving of the fabric of our country that can make it truly strong and indivisible. Yes, campaigns, by their nature, cause fragmentation, but intentional acts of consciousness and compassion tend to heal, and as we move past November 8, our collective appeals for a better and interdependent future will be imperative.

During the Civil Rights movement, two great leaders of faith and action, Martin Luther King Jr. and Rabbi Abraham Joshua Heschel, locked both souls and arms, marching together in Selma at one of the seminal moments of that era. Speaking of that march in Selma, Rabbi Heschel famously remarked, “I felt like my legs were praying.” And he was right, they were, and as a result, the world changed, including an increased impetus for the passage of the landmark Voting Rights Act of 1965. This week, by walking (or riding) to our polls, our nation will once again have a chance to pray with their feet and to undertake one of the great privileges of humankind (further secured by the Voting Rights Act) — the privilege of exercising the sacred and civil right to vote for our leaders.

Then that day too shall pass, and every day thereafter we will have the ability to also undertake a sacred privilege to pray with our voices and our hearts, for the nation we live in and the kind of people we wish to become. I know that I will be praying for my country much more intently now, and I pray you will be too — it will take all of us to aspire to be the best of us. And perhaps if we act, and pray, together, our prayer of our country will be more than an aspiration — it will become a reality.

About the Author
Seth Cohen is the founder of Applied Optimism, a global consulting and community design lab that helps organizations and leaders design and apply optimistic solutions to complex challenges.
Related Topics
Related Posts
Comments