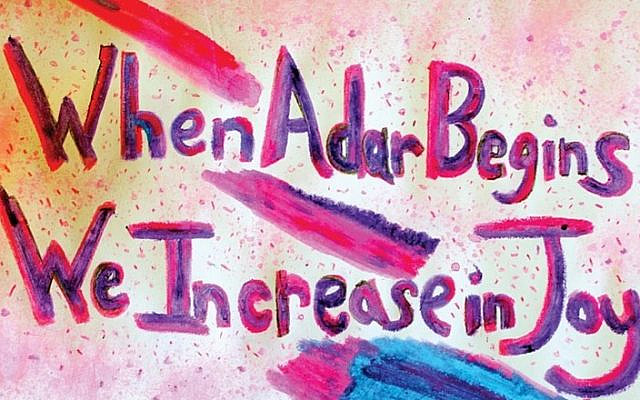 Be Happy It's Adar.

In the North of France, there lived a French Jew called Yehuda Ben Souson. As a result of a blessing he received from the Rebbe (Rabbi Menachem M. Schneerson) through Rabbi Shmuel Azimov, an only child, a daughter, was born to him after ten years of marriage.

At about ten years of age, the girl started complaining of severe pain in her head. After some tests, it was discovered she had a large tumor in her brain. Their only solution was to travel to Boston and consider their options once there.

The doctors in Boston offered two possibilities. One was an operation; however, they could not guarantee she would live through it. The second option was to leave things as they were, and she would last at the most another half-year.

The father immediately went to Brooklyn for a private audience with the Rebbe and broke out in overwhelming cries.

The Rebbe looked at him and said, “When the month of Adar comes, one must increase in joy, and you came here to do the opposite? Who permitted you to bring depression into my room?” The father thought the Rebbe was making light of the situation in such a difficult moment and started to cry out, “This is the life of my daughter.” The Rebbe held firmly to his position and again responded to the father. “And is that how you intend to save your daughter? By bringing depression and sadness into the room in the month of Adar?”

The father asked how it was possible to be joyous given his circumstances. The Rebbe answered, “Adar is a month of joy because ‘everything was turned on its head.’” The Rebbe then turned his hands over from right to left and said, “Turned over, everything turned over.”

The father left the room and suddenly remembered he forgot to ask the Rebbe about the operation.

The father submitted a letter, and the Rebbe answered through the secretary that he had already addressed the issue during the private audience. The father did consider the words, “It is all turned over,” but insisted on receiving a more explicit directive. The Rebbe answered, “If he insists on asking, he should take guidance by asking a third doctor.” The father only understood this entire exchange with the Rebbe later on. The third doctor advised them to go ahead with an operation. To the amazement of the doctors, when they opened the girl’s head, the tumor was gone. However, the operation had a great price, for she lost her ability to speak.

That Passover, the family was staying with relatives in Flatbush, New York. They decided to walk to 770 Eastern Parkway and spend the last meal of the holiday with the Rebbe, as all Chassidim do. During one of the breaks at the meal, the Rebbe called the father over, gave him two pieces of Matzah, and told him, “Matzah is the bread of cure and also the bread of faith. Give one piece to your daughter that she should have a cure, and the other piece should be for you to have (deeper) faith. Your daughter does not have to lose out because you are lacking in faith.”

Later in the evening after Havdalah, when the Rebbe was giving everyone some wine, as the father was passing by, the Rebbe told him, “Normally, the month of Nissan is a month of (energy for strengthening ones) faith, and then afterward the month of Iyar is a month of (energy given to) cure. In your case, however, ‘it is all turned over,’ and the cure of your daughter should not (have to) wait until you have faith. First, she will be healthy, and afterward, you will gain your faith.”

That evening, the daughter’s memory and speech returned to her!!! Amazing!!!

*** The following is a postscript to a letter sent by the Rebbe.

“You write regarding the Jew from Bulgaria, who says he is waiting to see miracles and wonders, etc., and then [will observe more of the Mitzvot…]. Tell him that if he looks to his past, he will see many miracles and wonders, as long as he does not care to fool and dupe himself. And also, why would he want to challenge the Creator of the world and its conductor, that He, God forbid, bring upon him another time, to constricted straits, to a position of danger, and then have to save him! Obviously, the fears there will have to be until the relief comes….; he was already in such situations in the past and was saved. It is only that the evil inclination is taunting him to keep him from fulfilling the commandments of the Creator of the World (Right now at this time.)

May it be God’s will that you will “speak words from the heart that will certainly enter the heart” and he will go on the straight path, the path of Torah, our Torah, the Torah of Life, which is best for him, not only physically but also spiritually. This alone that I write regarding a Jew I have never seen, who was in the past in a very dangerous situation and was saved, this alone should be enough (to have proven a Godly sign) that immediately, as he receives this message, he should begin to put on Tefillin, eat kosher, keep Shabbat, etc. May it be God’s will you will share good news regarding this.”

It is incredible the open miracles and prophecy of the Rebbe, in these two situations. We can still very much connect to this great Holy man (his soul and his shepherding) by studying his teaching and following his spiritual guidance.