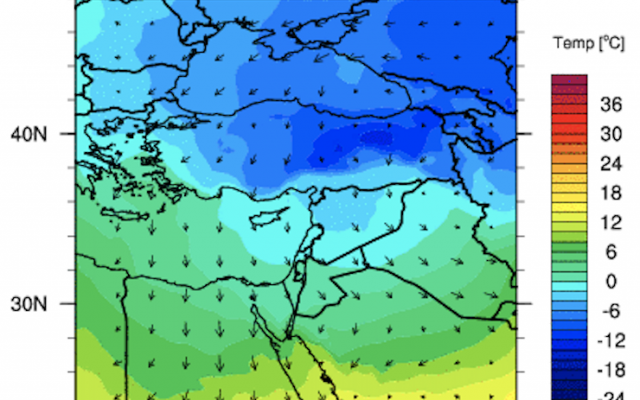 The weather this Shabbat was really quite pleasant. The almond trees have bloomed — and spring seems like it has arrived (although later than last year). But, clouds have encroached on our area and they are a portend of potentially dramatic changes in our weather.

The change should remind folks much more of January than Spring, and even more unusual will be the length of the continued cold weather that is about to encroach on our area.

We’re actually just missing a late winter snowstorm this coming Friday. A very cold air mass will make itself present at lower levels, but the upper level trough associated with the storm will probably stay just to our north. The reason, as noted by my “Israel Winter Weather” group is that an unusually strong Scandinavian high pressure area will wrap the storm into its circulation pattern, sweeping the upper bubble of cold air away (west) from us — just as the lower level cold air arrives in force.

My partners might not agree that we’ll see some snow with this soon upcoming system at the higher elevations of Jerusalem and the Galilee. Yet, there are global ensemble forecast members that do suggest a period of (non-accumulating) snow either late Thursday night or Friday morning. These forecasts are on the colder side of the forecast range of temperatures at 850 and 700 mb.

All forecasts show precipitation from sometime Thursday into Shabbat morning, with the peak precipitation amounts occurring with the cold front Thursday night into Friday morning (possible, accompanied by thunderstorms).

We would all agree that the real story is the cold which will settle in through Shabbat. The very windy weather (winds 50 km/h and higher in gusts) will lead to very cold wind chills.

Temperatures should start to moderate on Sunday, but how much they moderate before Tuesday March 15th or Wednesday March 16th is still unclear. The next day, Purim, is when the drama begins. What will be very interesting to see is if some of those dressed up on Purim as snowmen are actually real snowmen.

As noted by Jonathan Hoffman (group member), the European Center for Medium-Range Weather Forecasts show the Scandinavian high pressure shifting to the west as we move into early next week. This will open a pipeline for frigid air to move southwestward from Siberia into our area during the Purim holiday. As noted by Mr. Cantor (group member): “This allows the upper low north of us to connect better with a high-amplitude trough extending all the way from the North Pole through Siberia and the Caspian Sea.” This will usher in cold air both at the upper and lower levels (see map picture above). The European Center forecast indicates a greater likelihood of winter weather than the US Global Ensemble Forecast System, but both show this unusually cold feature during the Purim period.

As for an actual accumulating snowstorm, it’s too soon to tell. Right now, the forecast leaves the upper trough a bit too far to our east for a major snow event on Purim. We can only say that an atmospheric set up for a major Purim snowstorm will happen only if the upper air trough migrates into the eastern Mediterranean. Right now, we still don’t know how this story ends.

People like to say that it always snows on Purim. This is really just a Purim fable, although grounded in past history. For instance, it snowed three times on or near Purim in the 1980s. Over the previous two or three decades, it snowed at least another four times. Considering that it hasn’t snowed since then on or about Purim, it’s really the “old-timers” who think it snows on Purim. Maybe the “young-ins” will soon think so too. We’re hoping that our youngest member, Nevo Gal, will soon agree that is snows on Purim.

Considering we’ve been tracking this Friday’s storm and Purim’s ‘potential storm since the first of March, the persistence of the winter signal throughout is a good indicator that something unusual is taking place in our atmospheric circulation pattern. In fact, this interview with Dr. Judah Cohen explains how differential warming in the arctic (correctly predicted by climate change prediction models) has led to an increase in the severity of winter cold. Right, the world on average is warming, but changes in the circulation pattern can lead to local extremes that rival much colder times of the past.