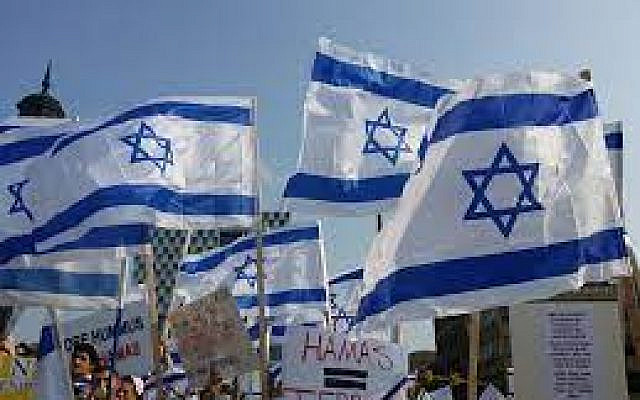 Israeli flags at a pro-Israel march, via Creative Commons

There was recently an article published on The Blogs aiming to argue from a liberal Zionist point of view “why Israel is worth saving.” The argument is born from contradiction alluded to by the author. On one hand, the standards of modern “individualists, cosmopolitans, humanists, and liberals” fundamentally object to the concepts of nations, nation-states, and nationalism, Zionism included. On the other hand, all Jews regardless of affiliation or ideology have an inherent, suprarational connection to their people, their G-d, their land, and, today, their nation-state.

To bridge this gap, the author tries to explain our suprarational, inherent allegiances in tangible, countable terms. This effort is admirable in theory, but it ends in a rather weak defense of Israel that misses the point and only hurts Israel’s case for continued existence.

The author’s appeal is a head-and-stomach argument; that the subject is good because it provides tangible and intangible goods, in this case, material affluence and political privileges. The author touts Israel’s relatively recent technological and economic boom, its scientific innovations, the amazing fact that Israel has such an abundance of new and innovative material goods that it has gone past satisfying its population and has become a gift for the entire world. Along with bread on the table, Israel allows for many political privileges, the author cites such examples as it extends to Arab Israelis and PNA nationals and its result in a racially diverse, religiously tolerant society.

These things, however, are not real defenses of Israel. There are many rich countries, many smart nations who produce scientific marvels. Should Jews spend as much time defending the United States and United Kingdom, the producers of the three major coronavirus vaccines, as they do Israel? How about Russia and China, both world leaders in military-science innovation; or Japan and South Korea, for their global leadership in entertainment technology?

There are many diverse and tolerant countries, most of the Western world is far more tolerant and diverse than Israel. Should Jews abandon Israel to defend Canada for their steadfast commitment to the privileges of homosexual and transgender individuals? Should we rush instead to defend Italy for their lenient voting laws? What about Germany or Sweden for their acceptance of mass immigration from the Middle-East and North Africa?

Israel is worth defending because it is our state. It is our inheritance. It is the state of our brothers and our fathers, in our land, sealed by the ancient promise and continued will of Our Father in Heaven. Yes, it is a great testament to our people and our G-d that our recently renewed state has blossomed so quickly into a bastion of innovation and prosperity, but these things are a benefit of Israel’s existence, not its basis.

Israel’s basis, its raison d’être, is to secure the homeland and future of its people, the Jewish people. Our allegiance to the state is inherent because our allegiance to our people, our homeland, our G-d, and our shared future is inherent. That mission, not the products of that mission, must be centrally stated. Israel’s raison d’être is necessary and valid, furthermore, it is the argument that needs to be made.

I do believe that this author, like any other Jew, has a deep, inherent connection and allegiance to Israel. To question that, in my opinion, is nothing short of heresy. However, when anyone tries to explain or rationalize this allegiance in shallow, utilitarian, bean-counting, head-and-stomach arguments, it not only misses the mark but undermines Israel’s entire case for existence. Instead of looking to the shallow and complex Jews must recognize the deep and simple reality; we defend Israel because it is our land given to our people by our G-d.