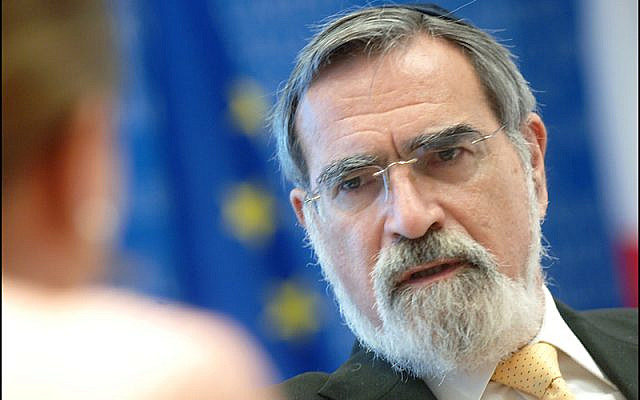 Monday evening, the 20th of the Hebrew month of Cheshvan, marks a full year since the tragic passing of Rabbi Lord Jonathan Sacks.

Over the last year, it has been clear that Rabbi Sacks touched the lives of countless people around the world, leaving many devastated at the loss of a beloved teacher and mentor.

In a world in which religion is often derided as outmoded, ridiculous, and ultimately illogical, Rabbi Sacks provided a religious voice of reason. His was a voice that guided many Jews and showed that Judaism at least remains a radical concept with a message still highly relevant in today’s world.

Over the last year, I have read two chapters each week by Rabbi Sacks, each one related to the weekly Torah portion. One of the things that immediately stands out in his writing is his sourcing: he was a learned, well-rounded man, as adept at citing from obscure religious texts as he was from the giants of literature, psychology, philosophy and economics, and had a particularly deep appreciation for the writings of America’s founding fathers.

His own writings continue to profoundly impact Jewish life around the world, and have touched the lives of many non-Jewish people too. Just two weeks ago former prime minister Tony Blair spoke at an event and recalled what he had learned from the former chief rabbi, and recited from Pirkei Avot:

“Reflect on three things, and you will not transgress, go wrong, lose your way.” Da me’ayin bata, “know from where you came,” ulean ata holech, “and where you are going,” velifnei mi atah atid liten din vecheshbon, “and know before whom you will have to give an account.’”

It was a surreal moment, seeing the former prime minister of the United Kingdom struggle over the ancient Hebrew text, but clearly grasping fully its meaning.

Seeing this may help British Jews specifically understand just how wide Rabbi Sacks’ reach was. He influenced not only the British Jewish Orthodox community, but people of all stripes around the world. In recent years, with his Covenant and Conversation series translated into Hebrew, an increasing number of Israelis have developed an appreciation for his insights, too.

A scholar in every sense of the word, his immense grasp of a wide range of disciplines meant he was accorded respect by those of all faiths and none, his counsel valued by royalty and religious leaders alike.

Here was a potent writer, who courageously addressed religious violence in the aftermath of 9/11, and who continued to write prolifically – so much so that he had two books published in the year of his death, and yet another has only recently been published, post-mortem.

On a personal note, for me, Rabbi Sacks’s rational, profoundly compassionate voice has been an antidote to the zealots who claim that theirs is the ultimate way to express one’s faith, and a source of strength in my own choice to remain religious.

Basing his claims on Jewish sources, Rabbi Sacks repeatedly, cogently and often brilliantly made the case for a more tolerant, understanding, and humane religious experience.

I hope and pray that his words continue to penetrate the hearts and minds of people for many years to come.