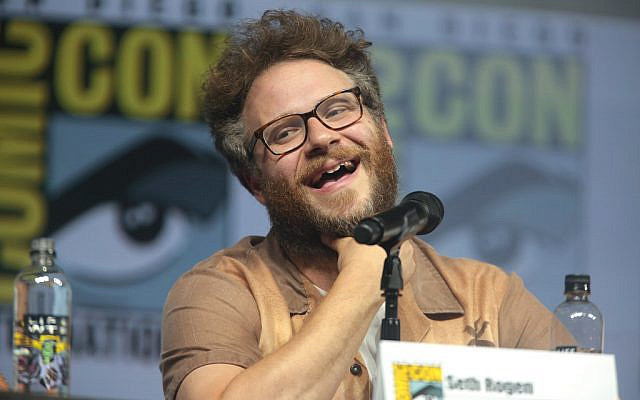 In a bid to promote his upcoming HBO flick “An American Pickle,” Jewish comedian Seth Rogen appeared as a guest on Marc Maron’s “WTF” podcast to discuss the film and “other Jew-y stuff.”

Rogen’s brand of self-effacing comedy was never my speed, so I didn’t bother with the initial broadcast. However, after word got out about some of Rogen’s more questionable remarks, I needed to hear it for myself. I took an hour out of my time and gave the podcast a listen.

Having done so, I can say with certainty that Maron’s “trigger warning” for anti-Semites was misplaced. The anti-Semites had plenty of red meat to feast upon. The real trigger warning should’ve been given to the 90%+ of Jewish-Americans who are resolutely Zionist.

Rogen and Maron spent the first 10-15 minutes discussing Jewishness in a humorous and self-deprecating way, before turning their attention to Israel.

A few choice quotes from Seth himself…

“I haven’t gotten along with an Israeli in a long time,” to which Marc replied, “I never have.”

“I agree. You don’t keep all your Jews in one basket. It makes no sense whatsoever,” in response to Marc’s suggestion that Jews should be spread thin throughout the world.

“Would you ever live in Israel?” to which Seth replied “NO!”

“I also think that as a Jewish person, I was fed a huge amount of lies about Israel my entire life. They never tell you, that oh by the way, there were people there. They make it seem like it was just sitting there, oh the f*cking door’s open!”

“Israel is the thing that I look back on and look at as maybe that was the thing I was most misinformed about, specifically Israel and Palestine”.

“If it is truly for the preservation of the Jewish people, it makes no sense, because again, you don’t keep something you’re trying to preserve all in one place especially when that one place has proven to be… pretty volatile. I’m trying to keep all these things safe, I’m gonna put them in my blender and hope that that’s the best place… that’ll do it. It doesn’t make sense to me.”

No mention was made of our indigenous connection to Israel, nor was there any mention of our exile or the 2000 year long span of colonial occupation that kept us in a perpetual state of dispossession and subjugation. All of that was glossed over. They both appeared utterly clueless as to why Herzl and his followers sought self-determination in Israel in the first place (hint: it had nothing to do with religion).

Their conclusion seemed to be that we are only there to serve Christian interests – to fulfill their ludicrous “end of days” prophecy – and that there was never any genuine Jewish agency inherent to Zionism. If this is what he was taught about Zionism, then he has indeed been lied to.

And as an American Jew who was raised secular and once held many of the same beliefs Seth expressed on his podcast, I think I’m qualified enough to unpack his statements.

“I agree. You don’t keep all your Jews in one basket. It makes no sense whatsoever.”

This rejoinder may seem sensible to casual observers, but falls flat on its face when paired against the past 2 millennia of Jewish history.

We spent 1,800 years wandering – fragmented throughout the world by Romans and subsequent occupiers. In the majority of cases, we were prevented from returning home.

Jewish colonies could be found in nearly every corner of the Old World. We were spread thin, forced to eke out an existence in alien lands. Our safety contingent on the whims of whomever happened to be ruling over us. We lived as a conspicuous foreign presence, especially in white Europe, and were very easy to scapegoat. We were convenient receptacles for violence and abuse whenever things went wrong.

This status quo prevailed for centuries, and the results were invariably catastrophic. Massacres, expulsions, institutional racism, and forced conversions were our “normal”. Meanwhile, those of us who managed to remain in Israel (or return home) were denied the right to autonomy, barred from praying at our most sacred sites – including the site of our First and Second Temples, which had been converted into a pagan temple and, then, a mosque – and subjected to a draconian apartheid system known as ‘dhimmitude’.

This was allowed to happen because we did not have the means to put an end to it ourselves. Our independence had been lost. The vast majority of us had been exiled. We had no borders, no army to protect us. We were not allowed to live in our own land under our own rule – or at all.

In other, we have already tried Seth’s proposed strategy (primarily against our will). It failed. It failed miserably. And the vast majority of us, quite understandably, have no interest in trying again.

If Israel had been re-established just 10 years earlier, it’s likely that six million Jews would have never perished in the Holocaust. That Seth and Marc want to reinstate the very same status quo that made the Shoah possible in the first place is, as they would put it, insane.

Lastly, his concerns about “putting all Jews in one basket” amount to a strawman fallacy. No one is arguing for this. No one is forcing him, or anyone, to live in Israel. It is there as an option, especially for when things get hairy in diaspora. It’s always good to have options.

“They never tell you, that oh by the way, there were people there. They make it seem like it was just sitting there, oh the f*cking door’s open!”

Indeed, there were. A small but still noticeable percentage of them were Jews – still living under foreign occupation, as we had been since the Romans, Arabs, Crusaders, and Ottomans arrived. We were already the majority in Jerusalem by the time of the First Aliyah, when Jews began returning from exile in Europe.

However, the total population of Israel/Palestine amounted to less than 1 million. Today, the land holds more than 10 million people. So while there were “people there” (the majority of whom were occupiers or descendants of occupiers), there was plenty of room for Jewish returnees as well.

We also shouldn’t forget that prior to the war of 1948, there were partition plans that envisioned no person losing their property, and other plans that would have created yet another independent Arab majority state (there are already 22, most of them stolen from indigenous peoples) in what is now the ‘West Bank’ (historically, Judah and Samaria). This was all rejected for the sake of preserving/reinstating Arab hegemony in Israel.

The war of 1948 could have easily been avoided if the Jewish community of Hebron hadn’t been ethnically cleansed in 1929. Or if the Nebi Musa riots of 1920 (accompanied by the chant “Falastin Biladna wa al-Yahud Kalabna” i.e. “Palestine is our land and the Jews are our dogs”) hadn’t happened. Or if the British proposals for a binational state in the 1930s weren’t rejected by the Arab High Committee insofar as it meant accepting any Jewish refugees at all. Or if they hadn’t collaborated with the Nazis and begged them to bring their death factories to the MENA region. Or if they hadn’t mass invaded in 1948 in an attempt to finish Hitler’s work by driving every last Jew into the sea (this is why there were no Jews left in the ‘West Bank’ after 1948 – Jordan had slaughtered or expelled us all).

Or, most importantly, if they had understood from the get-go that we are indigenous to the land and have every moral right to be there, and that their ancestors (in invading and colonizing Israel) laid claim to a land that never belonged to them in the first place.

Kurdish attempts at independence have been met with genocidal opposition and in the last Kurdish referendum, the Palestinian newspaper “Al-Quds Al-Arabi” referred to the prospect of an independent Iraqi Kurdistan as “a knife in the heart of the Arab world”. The same language was used in 1947 about the prospect of Israel’s re-establishment.

“You don’t keep something you’re trying to preserve all in one place especially when that one place has proven to be… pretty volatile. I’m trying to keep all these things safe, I’m gonna put them in my blender and hope that that’s the best place… that’ll do it. It doesn’t make sense to me.”

Because that volatile place is our homeland.

There’s a reason we call Germany, Poland, Iraq, Yemen, the United States, and every country in the world not named Israel “diaspora”. Because we are native to Israel. Jews are to Israel what Native Americans are to America, and Tibetans are to Tibet.

The Arab mayor of Jerusalem said as much in 1899…

“Who could challenge the rights of the Jews in Palestine? Good lord, historically, it really is your country”. ~ Yusuf Diya al-Khalidi, Arab mayor of Jerusalem, 1899

Moreover, at least half of the world’s Jews live in Israel and depend on it for safety. The re-established State of Israel is comprised of returnees from Europe, the USSR, Iraq, Iran, Egypt, Morocco, Ethiopia, the United States, and countless other countries throughout the world. Many of them fled hostile conditions, were expelled, or had to be rescued and airlifted into Israel.

Most Israeli Jews are there not only because it is our ancestral homeland, but also because they had nowhere else to go.

As a wealthy, successful comedian who has lived his entire life in North America, he doesn’t seem to understand this. Many Jews never had the opportunity to go to America or Canada. In fact, both countries were, until relatively recently, hellbent on keeping us out. Not even 100 years ago, America and Canada turned away boatloads of refugees and sent them straight back to the Nazis. Seth seems to have forgotten his own people’s history.