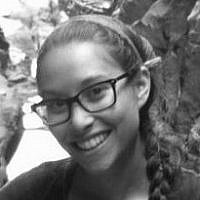 The Blogs
Anna Rose Siegel
Apply for a Blog
Advertisement
Please note that the posts on The Blogs are contributed by third parties. The opinions, facts and any media content in them are presented solely by the authors, and neither The Times of Israel nor its partners assume any responsibility for them. Please contact us in case of abuse. In case of abuse,
Report this post.

Eretz Chadasha: The Promised Land, a “documentary-infused” play by Shachar Pinkhas and Shay Pitovsky, succeeds in unequivocally moving its audience by revealing the bleakness of the situation of African asylum seekers in Israel without exploiting asylum seekers’ suffering. The characters, Sudanese asylum seekers and Israelis, are portrayed with utmost accuracy and respect for their dignity and complexity. In just one act, this play manages to explore Israeli society’s multi-dimensional attitudes towards asylum seekers and expose the tacitly discriminatory practices of Israel’s Ministry of the Interior (MOI).

Eretz Chadasha skillfully depicts MOI’s manipulative interrogation practices and hypocritical policies relating to the employment of asylum seekers in Israel. In one scene, a MOI officer grants an asylum seeker a conditional release visa—a visa that affords asylum seekers a few months of protection from deportation but no other rights or privileges—with the caveat: “Temporary visa, not a work permit.” The officer goes on to say, “You can work but you can’t be employed.” When the asylum seeker asks whether that means he is allowed to work, the officer fires back at him saying, “No, it’s illegal. But if you find something—you can.”

This irony effectively brings to light the absurdity of a policy wherein Israeli employers cannot be penalized for hiring asylum seekers, but asylum seekers have no rights as workers (i.e., no legal recourse if they are mistreated by their employers). This policy serves as a discrete nod to the Israeli economy’s demand for asylum seekers in its labor force and as an overt message to asylum seekers that they are unwelcome in Israel despite the demand for their labor.

This past Wednesday, I attended the Mosaic Theater Company’s production of this play in Washington, D.C. I was amazed by the Company’s ability to so comprehensively translate Israeli and Sudanese characters and contexts for an American audience. The actors and creative team captured the often elusive idiosyncrasies of Israeli society while portraying experiences in a way that would engender universal empathy.

Eretz Chadasha is playing at the Woolly Mammoth Theater until Sunday, February 28th and will then be on tour at area universities from February 29th to March 6th. Visit this site to learn more about the production and to purchase tickets: http://www.mosaictheater.org/the-promised-land/.

About the Author
Anna Rose Siegel currently lives in Washington, D.C. and is the D.C. Coordinator for Right Now: Advocates for African Asylum Seekers in Israel. She previously lived in Tel Aviv and worked at the African Refugee Development Center and the Negev Coexistence Forum.
Related Topics
Related Posts
Comments