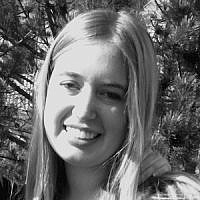 The Blogs
Ariela Karmel
Apply for a Blog
Advertisement
Please note that the posts on The Blogs are contributed by third parties. The opinions, facts and any media content in them are presented solely by the authors, and neither The Times of Israel nor its partners assume any responsibility for them. Please contact us in case of abuse. In case of abuse,
Report this post.

Imagine that you are a North American university student dealing with the pressures of classwork and maintaining your GPA. You’re working tirelessly, bussing tables or serving coffee, just to put yourself through school. Maybe you’re living away from home and trying to acclimatize yourself to a new social environment on unfamiliar terrain.

Imagine that in addition to the typical academic, financial and social pressures that every student encounters, you also have to contend with a systematic and relentless campaign that slanders, demonizes and ostracizes your culture, nation, homeland and country.

A campaign that not only refuses to recognize your country’s existence, but actually calls for its destruction.

A campaign that seeks to boycott any company, professor, speaker, or film from your country.

A campaign that bombards you with false accusations aimed to slander and delegitimize your country’s right to exist.

A campaign that denies your people’s history and rights, and, in fact, openly proclaims that the rights you do have should be rescinded.

Imagine the shock, fear, and anxiety that you would have attending lectures, walking down the halls, and meeting new people.

Imagine being subjected to this every day and you will have only an inkling of what it feels like to be a Jewish, Israeli, or pro-Israel student on a North American university campus today.

This is happening, in large part, because the anti-Israel movement has worked tirelessly over the past several decades to alter public opinion about Israel, while the pro-Israel movement has only recently recognized that there is a problem at all. Now we are about twenty years too late, trying to play catch-up, and too often operating in crisis mode.

It’s high time that we challenge the fallacies of the anti-Israel movement and that they are called out for the divisive and toxic banalities that they promote on campus:

For students on university campuses it is essential that that we tackle these falsehoods. We must form our own narrative or it will be formed for us, without our consent.

It is time that we own our culture, our history, our struggles, our triumphs, and our identity. It’s the difference between being dragged into the arena and walking into the arena with your head held high.

Own your identity, or someone else will.