I feel like reality has been ruptured – into two different timelines.

One world with a hero like Ari, my neighbor and friend. Where he sits right in front of me in shul, where we talk and joke about this and that. The Ari who taught Betzalel karate years ago, and now was so proud to see his former student as a self defense instructor in the army. The Ari who was always playing around with his boys – Natan Shai who hasn’t yet reached his bar mitzva, and Yakir, who while still a teenager, towers over all of us. The Ari so dedicated to his daughters Tamar and Naomi, and of course to his wife Miriam, so close that their birthdays are only hours apart. And most famously, the Ari who defended Israel in every possible way – on the battlefield, in the streets and on the screens. 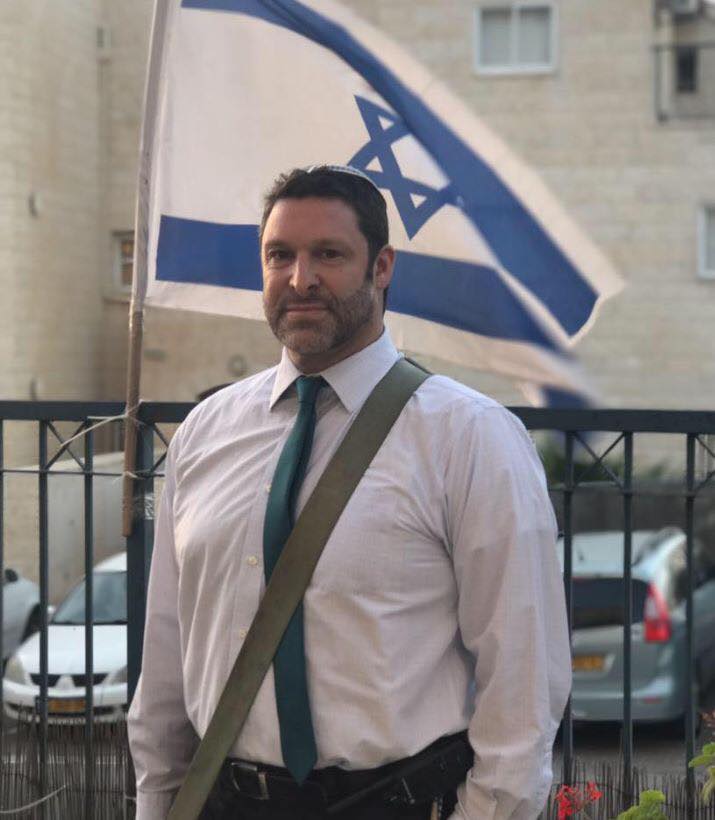 And now we have this other timeline, which seems to have no connection to the first. Ari killed by a loathsome teenager (may he rot in hell – soon!) in a parking lot? Who would ever think of attacking Ari? When I first saw the video, even before anyone told me Ari was attacked, I recognized him. But I thought he for sure must have been just on the scene, and jumped into action. Ari a victim? Never!

I can’t reconcile these two timelines. It’s causing a mental dissonance, that has delayed my writing this for hours, and even now, I don’t really know if what I’m writing makes sense.

But even though I can’t resolve the real and the surreal, I think Ari actually knew how. While we only met when we moved to Efrat in the early 2000s, we did overlap in a way a number of years earlier. Both of us were serving in the army at the same time in the 1990s. I was a lone soldier, and I remember being so shaken by the murder of another lone soldier, Yehoshua Friedberg in 1993. For me it was someone to read about in the news. Ari buried a friend. And the painful memory of Yehoshua’s murder stayed with Ari every day.

As Ari wrote 24 years later in this memorial, how much of what he wrote rings true for Ari himself:

I remember when time stopped and emotions reached a place I did not know existed. I remember a time when I buried my friend, Yehoshua Friedberg Hy”d Zt”l. He was brutally murdered by Islamic terrorists.I feel a great responsibility writing this as I share my feelings and try to describe the pain of friends and family who remember and live the pain every single day. Are there any words that can possibly describe who Yehoshua was? Are there any words that can possibly describe the pain his family feels 24 years later? Will people understand? Are my words enough to honor him? Let’s just say, it never gets easier! … 24 years ago today, an IDF platoon mate, a friend and a future leader of the Jewish nation was taken from us (maybe stolen is a better word). For some reason, by the decree of God (not that that makes it easier or understandable) and by the murderous and violent claws of our enemies a young man who was engaged to be married and would have certainly made a difference in this world, had his life cut short and was brutally murdered by Islamic terrorists.

Keep reading. You’ll see just how much Ari “understood” (if that’s even the right word) the difficulty so much of us are feeling now. Every word.

But for Ari, there were not two timelines, there was one. Because he knew just how difficult it was to establish a proud Jewish homeland, and the incredible sacrifices it demanded, he became exactly who he was. In face of the murderous animals who celebrate death, Ari was a dedicated Jew who celebrated life.

I still can’t digest what happened today. I don’t know how I will look at his seat in shul and not return to today over and over again. But if Ari has one legacy for us, it was the last lines of what he wrote about his dear friend Yehoshua:

“May his memory be a beacon of light for all of us and may his legacy continue to teach thousands the importance of who we are, where we are and what we are doing here.”

About the Author
David Curwin is a writer living in Efrat. He has been writing about the origin of Hebrew words and phrases, and their connection to other languages, on his website balashon.com since 2006. He has also published widely on topics relating to Bible and Jewish philosophy.
Related Topics
Related Posts
Comments