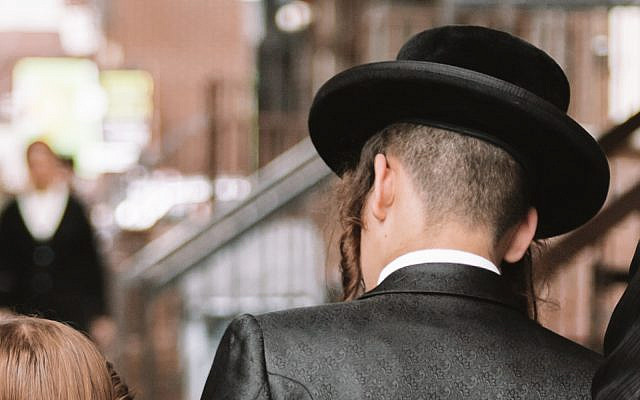 I could hear the rousing voices of Friday evening prayer as my host, Sholom, led me down the stairs to the cellar of a century-old tenement building, the home of a Williamsburg minyan. Inside, a Satmar hasid took my hand and drew me into dance with a packed throng of some 80 men in long bekishe coats, whose streimels brushed the low ceiling. The beautiful harmonies and Hungarian inflections (e.g. “OO-myne” in response to a blessing; eloikeini for “our god”) swept me away. I mused to myself that our Carlebach minyanim are but hasidic wannabes; ah, but this — this is the real thing. This is what it was like in the old world.

“Gevaldig!” I whispered to Sholom.

“It’s our Carlebach minyan,” he replied.

This shul is the epicenter of a small but growing phenomenon in the heart of Williamsburg: the progressive Satmar hasid. These are far removed from the rebels depicted in the Netflix drama Unorthodox. Committed to the Satmar lifestyle, they also feel a need for change. Some are dissatisfied with the staid mode of prayer found in most of the neighborhood shuls, almost entirely lacking in singing. “Our shul is non-judgmental,” one of its founders explained to me; “we take the boys that are on the fringe and ask them to lead our services and instill within them a sense of self-worth.” Hanging on the wall is a full-length map of Israel and several hasidim there told me that they were looking for shuls nearby that recite Hallel on Israeli Independence Day — an anathema in mainstream anti-Zionist Satmar. But these hasidim are online, increasingly engaging the wider world and asking questions. I am here because many of them have read my recent book, Ani Maamin: Biblical Criticism, Historical Faith and the Thirteen Principles of Faith, and wanted to engage with me and hear more. Although wearing a white kippah, a blue suit and no payus, I am, if you will, a rebbe for a shabbos.

These winds of change co-exist alongside a commitment to a deep conservatism. In the home of my host for Friday night dinner, Sholom, I had hoped to play a bit with the children. But unlike the children of Israeli hasidic homes who are bilingual, these kids understand nothing but Yiddish until the age of ten. I asked Sholom, 31, how many siblings he has. He laughed saying that his mother had just given birth a few months prior, her fourteenth. “It’s a record for Satmar,” explained his wife (whose name was not introduced to me, nor did I dare ask). “We had to send the kids to school with notes explaining that it was really true what they were saying that their Bubbe had just had a baby.”

I asked Sholom how shidduchim (matchmaking) work. “Well, in my case, I was 18 and given two options of whom to marry,” he said. “So I met with each of the potential shvers (fathers in law), and made my choice. Then I was introduced to my wife to be, and we made it official.” Sholom is from the Satmar community in the Catskill Mountains and I asked how he and his wife decided to settle in Williamsburg. “Decide? It was determined.”

A painful quest for meaning and truth

But why would hasidim dedicated to such a conservative lifestyle have any interest in hosting a Bible scholar from Israel to talk about academic approaches to the Bible?

Satmar is a way of life; a tight-knit community that holds steadfastly to its customs. But even its thick walls are porous. It entirely lacks an articulated approach to modernity secularism, and liberalism. If you are Modern Orthodox, for example, then you have been influenced, either directly or through rabbis and teachers, by the teachings of the likes of R. Abraham Isaac Kook, R. Joseph B. Soloveitchik or Rabbi Jonathan Sacks, of blessed memory, all of whom confront the questions posed by modernity. Within the hasidic world, the teachings of Breslov and Chabad equip followers to address these pervasive challenges. Satmar, though, never produced the theological resources to help its followers respond to and engage the modern world they now inhabit. Many are left bereft and asking questions that were unthinkable even a generation ago: What is the purpose of life? Of leading a life of Torah and mitzvot?

My hosts invited me to give a formal presentation in the afternoon on the thorny topic of the Sin of David and Bathsheba (2 Sam 11-12). But they also scheduled a kiddush gathering in the morning for a dozen of these searching hasidim to sit around the table and ask me questions. Their long coats and payus did little to conceal the pain in their queries: Is everything in the Tanakh historically true? And if not, what do we do with that? What is the difference between the yiddishkeit of someone who took observance on his own (as I did) and someone who is born into an observant culture? Can they trust me to speak objectively about biblical criticism when I myself am Orthodox? Some are well-read and raise the names Spinoza, Hobbes, Plato and Nietzsche. As the bottles of whiskey — new following Passover — flowed and the incredibly good herring was passed round, there was an energy to the deliberations; a hasidic man-cave at its apex. At the close, the host, Baruch, called for a niggun, and they reached for a Carlebach melody, “mizmoir, mizmoir shir, shir le-yoim ha-shabbos..” And to my amazement they continued in English, swaying, ”… the whole wide world is waiting, to sing this song of Shabbos.”

“Most of those fellows are struggling in their marriages over this,” confided Baruch over lunch. “Their poor wives have no idea what’s come over the husbands they married. And the women here don’t have the orientation or the wherewithal to relate to what their husbands are going through.”

I had long noticed that the Satmar hasidim who approach me on these issues are in their thirties, never older. Baruch explained why. “The community is thickly bound together; there are no secrets here. When word begins to get out that a husband is struggling in his faith, it’s a mark on the whole family. It means the boys won’t get into the right yeshivas and the girls won’t get offered good shidduchim. That’s when the wives confront their husbands, “Why are you doing this? You’re destroying the family.” And so the men at that stage of life give up their pursuit of truth and meaning and just swallow it.

Of snowmobiles and mobile phones

Over lunch with Baruch, I learned that a committed Satmar’s engagement with modernity can take on many forms. He and a handful of Satmar friends had just returned from several days of snowmobiling in Alaska. Although he told me that they were properly equipped, I couldn’t help but picture in my mind Baruch’s bekishe and payus blowing in the wind of the Alaskan tundra.

I also learned the answer to a riddle: How many cell phones do you need to be a Satmar hasid? Baruch reports that for nearly half the community, the answer is two. You’re expected to be accessible and so you must have a cell phone. But the official Satmar line is that only a kosher phone is permissible. If a yeshiva, for example, discovers that you have a smartphone your child will be denied admission. If you possess a smartphone so you can have internet access, you still need the kosher phone, lest you need to take a call in a public setting.

The most inspiring moment of my visit came over lunch with Baruch’s family. Baruch pointed to his oldest child and said, “Bayla, here has just celebrated her bat-mitzvah. We took her out to a restaurant for dinner, just the three of us.” But he made no mention of a party.

“Did you do anything else to mark the occasion, or was there anything in terms of observance that she took on? I asked.

“Yes,” said Baruch. “On the day of her bas-mitzvah, we gave her an egg. And for the first time, Bayla was the one in the house to check the egg, because now as a bas-mitzvah her word could be relied upon concerning issues of kashrus.” Baruch and his wife and the little girl all beamed with pride.

And I thought to myself what a lucky girl Bayla was and how much healthier it would be if our bnei- and bnot-mitzvah could have the experience that she had. She had approached her becoming a bat-mitzva without the distraction of a wagon load of gift-wrapped presents, without a party placing her at the center of the universe for three hours, and without the pressure of a public performance disconnected from the ebb and flow of her daily life. Instead, Bayla looked toward her bat-mitzvah with the anticipation of shouldering responsibility for her entire family’s observance of Hashem’s will through the laws of kashrut. And to top it off, she got to spend a special and memorable evening out with her mother and father.

I have to admit that when I entered the shul on Friday evening I felt alienated among the sea of black coats and hats. We so often define ourselves by who we are not — and never more so than in this past year of pandemic. How liberating it was to break down the barrier to celebrate Shabbat together and to learn Torah together; how liberating indeed it was to finally see the other as a brother.